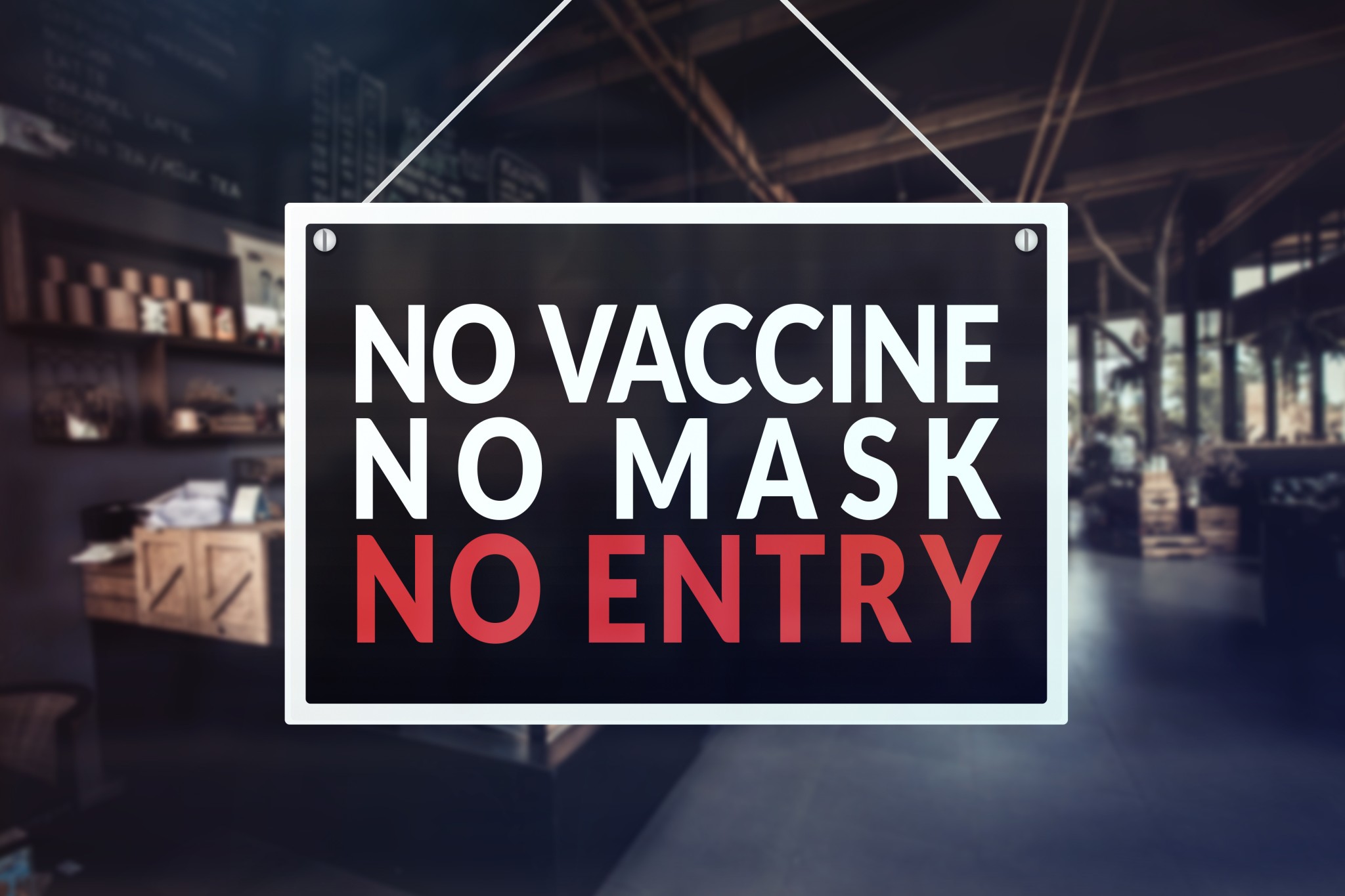 To venture to a restaurant in New York City in 2021 is to engage in an exercise in insanity. The place is besieged by vax fanatics whose left-wing ideology blinds them to science. A huge city is consumed by vax hysteria. That mindset has been imposed by a virulent combination of top-down government fiat and the psychological-ideological perversities of liberalism.

Walk up to a restaurant in New York. As one strolls up to the hostess to attempt a dinner reservation, the inquisition begins: “Yes, sir. We’re happy to try to accommodate all of you. Are you vaccinated?”

My answer: “Better than that. We all had COVID. We have immunity. Would you like to see proof of antibodies from us, or our latest negative COVID tests?”

The answer never changes: “I’m sorry, sir, but you must be vaccinated.”

Response: “But why, we have immunity?”

There was particular irony in this exchange last weekend. One member of our party had to cancel because she tested positive for COVID earlier in the week. And she’s the only who’s vaccinated. Her experience is increasingly common, given the waning efficacy as the virus mutates, as some vaccines plummet from an initial self-reported efficacy rate of 95 percent to now as low as 40 percent. The Pfizer vaccine is under 50 percent. It’s one of the particularly dubious mRNA-based vaccines with disturbingly short-lived effectiveness. This is why Dr. Anthony Fauci urges “boosters.”

The spectacle further reflects the vacuous simplicity and sophistry of restaurants being required to accept only vaccinated customers. Outside that restaurant in New York City, I watched a group of girls flash their vax IDs for entry. I wanted to quiz the hostess with a few crucial questions: What type of vaccine did these young ladies receive? When did they receive it? Have they had their boosters? How do you know they have adequate artificial antibodies? Can you cite even one study demonstrating their antibodies are superior to mine? How do you know they’re currently COVID negative?

The reality is that the restaurants — who, in their defense, are at the mercy of government mandates — have no idea. All that’s required is proof of some sort of vaccine at some point. Ditto for employees and employers everywhere.

The ridiculousness is furthered by the fact that someone vaccinated could be COVID positive. Such chances are far higher than for someone who had COVID in the past. Vaccination was never a 100% guarantee of immunity, and absolutely not greater than natural immunity acquired from surviving COVID. Nearly every study affirms the superiority of natural immunity. And why wouldn’t they? Anyone with even a rudimentary understanding of immunology knows this. This is why many countries and organizations accept proof of antibodies.

This is not, however, happening in liberal enclaves like New York City, where liberals blow with the winds of whatever the Democrats in charge tell them. What prevails is no common sense and no “following the science.”

One among millions fighting this battle is Dr. Aaron Kheriaty, who will soon be suspended without pay as a professor of psychiatry at the University of California-Irvine’s School of Medicine because of his refusal to obey a vax mandate. He says of his case:

If you look objectively at the scientific data — and we argue at this point that the data is overwhelming for natural immunity; it’s every bit as robust as the data for vaccine immunity. Natural immunity confers between 95 and 99 percent immunity against reinfection. Most studies put the number at north of 99 percent. Reinfections are exceedingly rare, they’re almost always asymptomatic. There’s not a single reported case of someone getting reinfected and transmitting the virus to others, which is astonishing….

We now have countless cases of so-called breakthrough infections and transmission from people who have been vaccinated. That’s now ubiquitous. The vaccines initially conferred a better immunity against infection. That immunity is declining with time and with new variants.

My immunity, as someone who has recovered from COVID, is between 95 and 99 percent effective. It is sterilizing, meaning there are no cases of transmission. And yet the person who got the Johnson & Johnson vaccine is considered “fully vaccinated” under the university’s policy. They’re allowed back on campus, where my different form of immunity, which is as good — in fact it’s better — but I’m not allowed back on campus….

Because these vaccines don’t offer sterilizing immunity, the public health argument is significantly weakened. “Do it for the sake of others” doesn’t work in the case of these vaccines.…

Efficacy has declined, in the case of the Pfizer vaccine, below 50 percent against infection, which is below the threshold that’s required for FDA authorization. It may have been above that threshold when the FDA authorized it, but unfortunately the efficacy has continued to decline since then. The efficacy of the mRNA vaccines appears to be pretty short-lived — it starts to decline at four months.

For some of them, it’s now below 50 percent efficacy, which is a very, very leaky vaccine, which is why people are already talking about needing boosters only six to eight months after the second dose. That doesn’t inspire a lot of confidence in these vaccines.

No, it doesn’t. So how do advocates of vax mandates get away with forcing vaccination? Because of self-imposed and self-accepted ignorance — their own and that of their allies. They don’t read articles like this or statements like that of Dr. Aaron Kheriaty. They hear and see only what they want to hear and see. They’re ignorant of contrary points of views — of facts that undermine the groupthink view of the herd. Note how Kheriaty begins his plea: “If you look objectively at the scientific data.”

But they will not even look at it. Their news sources don’t report information like this; rather, they censor it. Their social media slaps it with “misinformation” labels.

This is what blind ideologues do. They don’t consider information that goes against their hardened ideological preferences and prejudices. Thus, the likes of New York Mayor Bill de Blasio dig in and double down. Last week, de Blasio announced a vaccine mandate for all 160,500 city employees, including first responders, countless of which had COVID and don’t need to be vaccinated. They have until this Friday, October 29 at 5 p.m. to take the needle.

In response, this week thousands of workers marched in protest across the Brooklyn Bridge chanting “My body, my choice” and “F–k Bill de Blasio” and “F–k Joe Biden.” The police union is suing.

To close-minded ideologues like de Blasio and fellow progressives, who don’t consult sources beyond CNN and MSNBC, the protest by city employees is incomprehensible — a crass action of mass irrationality by “anti-vax” idiots. The only way to deal with such zealots is the long arm of the state. Or, as Biden’s CDC director says with breathtaking ignorance and arrogance, to “educate” them. And if “education” doesn’t work, then use force.

In all, it fosters just that: government management and control. If ever Americans needed proof of how dangerous centralized medicine can be, this is it. Government has nationalized COVID. This is one-size-fits-all healthcare policy: take the shot or else. They would fit us with leper bells if they could.

A prophetic leader on this issue has been Senator Rand Paul, who recently said: “We have developed … a system of health care in our country where doctors are afraid to speak out because they will cut out their research funding. Doctors who have talked about innovative treatment to try to help people survive COVID are being lectured and told we will take your license. This is the kind of thing, this top-down centralization of medical authority, it’s not good for our country and it’s not good for innovation.”

And what has made it much worse is the herd mentality of liberals, whether in New York or Washington or the media, who unquestioning follow whatever the Democrat leadership ordains.

Several months ago, editors at another publication rejected a piece I wrote on natural immunity. I had cited a major research effort by the Cleveland Clinic, conducted on 52,238 employees, which flatly concluded that individuals who had COVID “do not get additional benefits from vaccination.”

The editor wrote back that the Cleveland Clinic had followed up with a later statement recommending vaccination anyway. A spokesperson stated: “Cleveland Clinic recommends those who are eligible receive the COVID-19 vaccine.”

Why in the world would Cleveland Clinic suddenly contradict its own study and tell people to get vaccinated anyway? Surely because of what Rand Paul suggested: Clinic officials are afraid to speak against their federal sugar-daddies. The Beltway gravy train that bestows government goodies is irresistible to research institutions. They cannot speak against Leviathan.

Worse, the science has shown something else very disturbing to those with natural immunity pleading not to be forcibly jabbed: COVID survivors with high antibody levels should not get vaccinated because it can be dangerous. I recently mentioned my good friend Tom, who nearly died last May from COVID. His antibody level is 55 times higher than the minimum threshold level that the vaccines aim for. His physician told him he cannot be vaccinated. It would be dangerous. Besides, he’s completely immune. And yet, Tom cannot eat inside a restaurant in New York City because he doesn’t have a vax ID.

Moreover, I’ve written here about the unique dangers of vaccine-induced myocarditis and pericarditis in young people, which the CDC has acknowledged from the outset. These young people have a very, very low mortality rate from COVID infection. And many already had COVID. Their colleges force them to be vaccinated anyway. For those with natural immunity, that’s not justifiable.

How many people have natural immunity?

As I noted here months ago, the CDC estimated last May that at least 120 million Americans have had COVID — a number curiously not updated and far higher today amid the recent impact of the Delta variant. These herd-immunity people beg, with good medical reasons, not to be needlessly vaccinated. But alas, big government and its acolytes insist on the opposite.

This is how top-down centralization of medical authority works. It works especially dangerously when ideologically prejudiced Americans float with the winds of whatever that top-down authority dictates. They are the submissive brothers and sisters of Big Government. It is the epitome of herd mentality.

Vax hysteria has swept our big cities and government. The results are a blow to individual freedom and common sense and science. If this is what government control of healthcare looks like, then be afraid. It could be hazardous to your health.