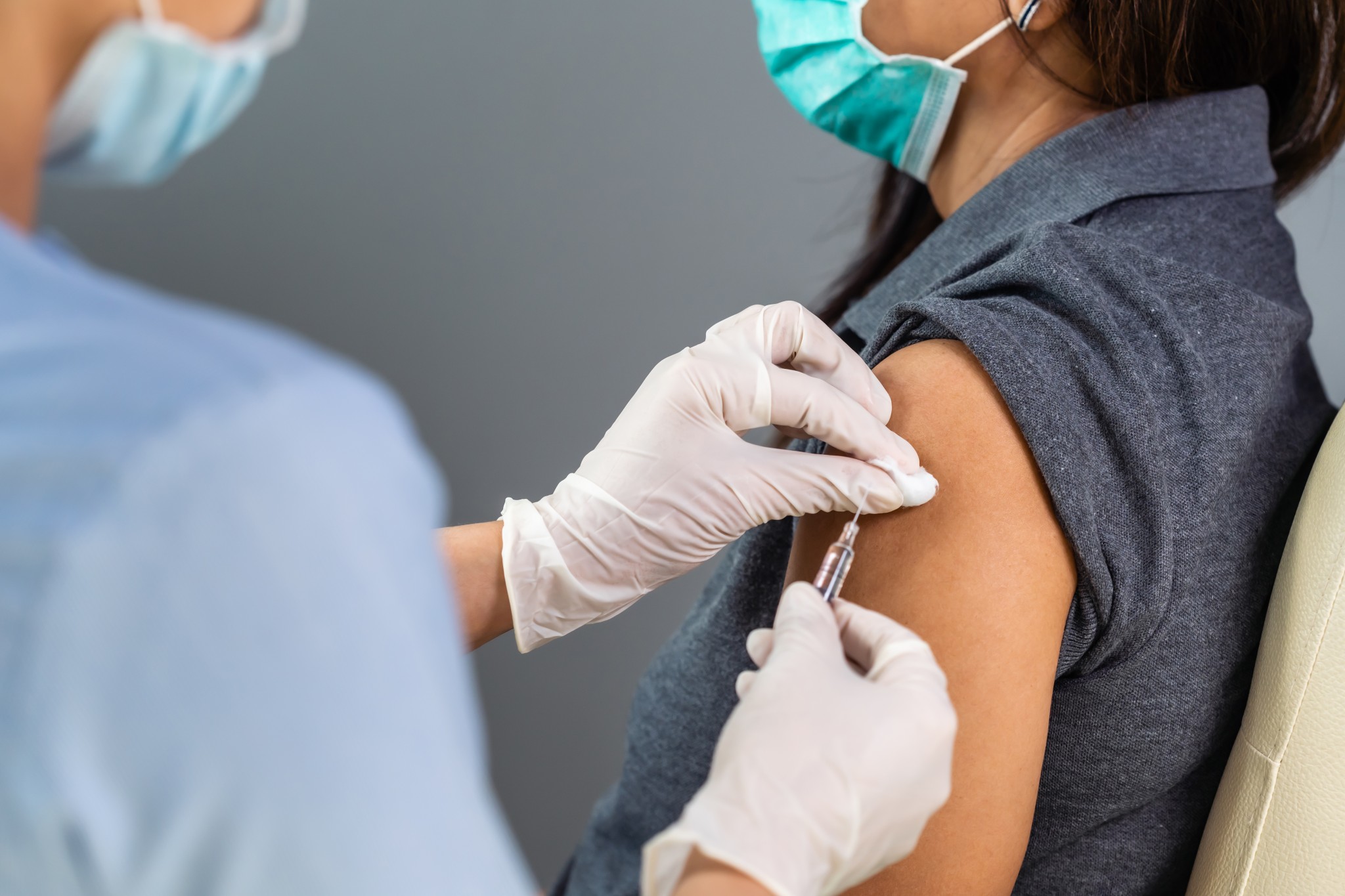 I’ve written at length about the bizarre lack of acknowledgment of COVID survivors who possess natural immunity. They should be recognized if not thanked as the indispensable contributors to the herd immunity once so desired in America. Instead, the nation’s vax fanatics, consumed by a herd mentality, wholly ignore them, to the detriment of a rational response to the pandemic.

The CDC says that 35 million Americans have tested positive for COVID. Of course, as I noted here months ago, the real number is much higher. In my own family, at least eight of us had COVID, but only two appear on CDC rolls as having tested positive. Countless households infected with COVID have a family member who tested positive while others did not bother getting a test to confirm the obvious and risk exposing others.

In fact, the CDC estimates that at least 120 million Americans have had COVID. That estimate is of colossal importance to the vaccination debate. Consider that, according to the CDC, as “of August 19, 2021, nearly 200 million people in the United States have received at least one dose of a COVID-19 vaccine.” Many people who tested positive for COVID-19 also got the vaccine, but many others did not. This means that there are more than the 200 million people who have some sort of immunity to COVID.

As I noted at length here previously, COVID survivors have long-lasting immunity. To quote a peer-reviewed study published in the journal Nature, patients who have recovered from COVID develop “long-lasting immunity,” with “antibody-producing cells” that “live and produce antibodies for the rest of people’s lives.” There was also a massive study by Cleveland Clinic, conducted on 52,238 employees, which concluded categorically that individuals who had COVID “do not get additional benefits from vaccination.”

More and more research confirms the predictable superiority of natural immunity over artificial immunity. That’s not a surprise. In immunology (which I worked in for four years), there was a saying: infection beats injection. Sure, one would rather not be infected, but when it comes to immunity, it’s almost always stronger for those who survived infection than for those who received artificial injection.

But you can’t tell that to a mad vaxxer, many of whom seem more influenced by ideology than medical research.

For an example of the absurdity, consider the case of a good friend of mine, Tom (I’ll keep him anonymous).

Tom had a terrible bout of COVID. I feared he would die. He was lucky to get through it, turning the corner in May. I saw him last week. He looks great. He’s fully recovered, a COVID survivor with natural immunity. How much so?

Tom got an antibody test. This PCR test showed that Tom’s level of antibody protection is off the charts. It exceeded effectiveness by a level of not one or two or even 10, but 55. A person with active COVID could lick Tom’s face and he would be immune.

This begs the obvious question: Why in the world would Tom need to be vaccinated? Quite the contrary, his doctor is telling him that for a number of reasons, including the very high antibody count, vaccination is not only unnecessary but could be dangerous (a common opinion among physicians). He absolutely should not be vaccinated.

Thus, other questions beg to be asked: On what grounds would Tom’s employer be justified in forcing him to get jabbed? Why should he need a vaccination passport, or a vax ID to enter a restaurant in New York City?

Here’s a better idea: How about if Tom shows proof of antibodies? Isn’t this what the vax fanatics should really ask of everyone, including the vaccinated? How do we know that those who have received the experimental mRNA-based vaccines from Moderna and Pfizer have reliable immunity to those of us with natural immunity? Actually, the latest research suggests they don’t.

Tom is far from alone. Many Americans pleading with employers or schools for a medical exemption from mandatory vaccination on the grounds that they have natural immunity are being told that such is not a valid reason for exemption. As one vax hysteric insisted to me, “The CDC and Anthony Fauci encourage vaccination anyway.”

Oh, yeah? Well, newsflash: As Sens. Ron Johnson and Rand Paul have attempted to explain, uh, Anthony Fauci is not God. The latest CDC statement is not infallible; to the contrary, CDC positions change based on new information.

What about teenage girls who had COVID and face a possible graver risk of myocarditis or pericarditis from mandatory vaccines? Even the CDC has issued warnings of this health risk. A new study published in JAMA acknowledges it.

Alas, is there any good news amid the vax hysteria? Are there any signs of hope for those of us with natural immunity who plead not to be jabbed with mRNA-based vaccines that are different from traditional vaccines?

Yes. I am happy to report one case.

At George Mason University, Scalia Law School Professor Todd Zywicki pleaded not to be forced to get a vaccine in light of the salient fact that he has natural immunity from COVID-19. The university, in an official statement, had insisted that “all students, faculty, and staff” get vaccinated and “share verification of their vaccination status, in order to work, study, and live on campus.” The university went so far as to threaten: “disciplinary action will be pursued against those faculty and staff who fail to receive an exemption and do not disclose their status and receive the vaccine. This action could include unpaid leave or possible loss of employment.”

Of course, GMU is far from unusual. Sadly, it’s typical of many universities, some of which (like Indiana University in Bloomington) have become high-profile legal cases where the student plaintiffs lost (including all the way to the level of Supreme Court Justice Amy Coney Barrett). As classes start nationwide this week and next, some colleges have already expelled students. The University of Virginia has just unenrolled over 200 students for not complying with its mandate.

Zywicki’s case was picked up by the New Civil Liberties Alliance, which argued: “For Professor Zywicki, who has recovered from Covid-19 and acquired robust natural immunity, it is not only medically unnecessary to undergo a vaccination procedure at the current time, but doing so also would create a risk of harm to him.” The NCLA notes that the U.S. Supreme Court has held that a “forcible injection . . . into a nonconsenting person’s body represents a substantial interference with that person’s liberty,” adding that subsequent court decisions have made explicit the right to “refuse unwanted medical care.” Zywicki states:

George Mason is forcing me to choose between serving my students on one hand and undergoing an unnecessary and potentially risky medical procedure on the other. Multiple clinical studies have shown that natural immunity provides at least as much protection against reinfection as the most effective vaccines—and unquestionably more protection than less-effective vaccines from China and elsewhere that university policy approves. Clinical studies have also shown that receiving vaccination after recovering from Covid presents an elevated risk of side effects compared to those without natural immunity, who would benefit from vaccination. This is an important health matter that should be determined by my doctor and me—not forced on me by university policy-makers who have no familiarity with my personal medical history.

It is indeed absurd. Millions of Americans are being subjected to the fiats of faceless employers who have audaciously anointed themselves to the roles of unimpeachable medical-ethical tribunals. Who are these authoritative experts? Truly, what are their credentials to judge?

Zywicki’s attorneys note: “Shockingly, according to the university’s policy, GMU will acknowledge any vaccine approved by the World Health Organization as satisfying the requirement, not just FDA-approved vaccines. This means it will accept many vaccines that have proven to be quite inferior.”

Precisely that is happening at strange workplaces nationwide. It’s a farce.

And yet, Zywicki’s case has a silver living: The university has apparently relented. It has granted the professor a medical exemption.

Finally, a victory for natural immunity and for sanity.

“I am gratified,” says Zywicki. “I speak for tens of millions of Americans in the same circumstances I am in, and I call on leaders across the country to develop humane and science-based approaches as opposed to one-size-fits-all policies.”

Sadly, many of those Americans, especially students starting back at college, will not get the perfectly reasonable accommodation that Zywicki received. The vax fanatics are like a mob. And one can’t reason with a mob.

One can, however, seek legal assistance. That’s an option that those with natural immunity must pursue. The mad vaxxers have left them no other option.