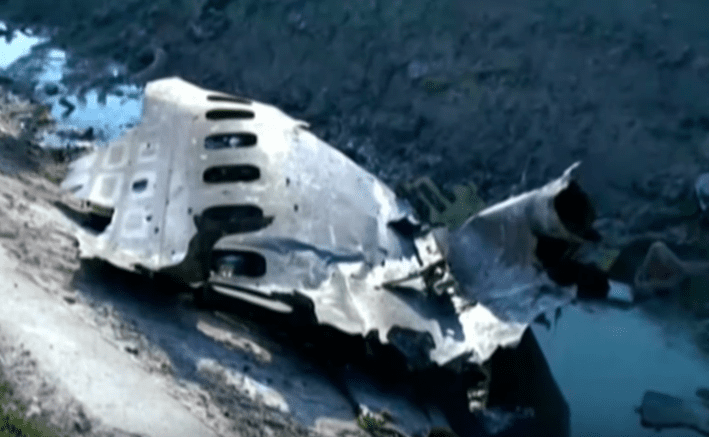 What we’re going to do here is take a little bit of a leap in our analysis, but the look of the tea leaves coming out of Tuesday night’s events, your author believes, justifies it.

Let’s start not with Iran‘s rather empty missile attack on a pair of military installations in Iraq at which American personnel are stationed, in which 15 missiles were fired and no human casualties were inflicted. Instead, let’s start with that plane.

You know about the plane, right? That would be Ukrainian International Airlines Flight 752, which took off from Imam Khomeini Airport in Tehran at 6:12 a.m. local time, accelerated quickly to 275 knots, and reached an altitude of 8,000 feet before its transponder and all radio transmissions abruptly ceased, and video of the plane crashing taken in the early-morning hours showed it as a giant fireball which became an even larger fireball as it hit the ground.

Some 176 souls were lost, 80 of them Iranians and another 63 of them Canadian, believe it or not, along with 11 Ukrainians and 10 Swedes, together with a smattering of other Europeans, Afghans, and others. No Americans were on the flight.

UIA Chief Executive Officer Yevhen Dykhne said the plane, a Boeing 737-800 (not an infamous 737 MAX 8), was only three years old, had an “amazing” crew, and had gone through maintenance just a couple of days before. Ukrainian President Volodymyr Zelensky, who initially bought the official story of “engine failure,” quickly reversed his position and demanded an investigation. Even Canadian premier Justin Trudeau now says he wants answers from the Iranians about the crash.

Nothing about the “engine failure” story adds up, though it seems the American media appears happy to swallow that line.

If you’ve ever seen Sully, you know that an engine failure isn’t so fatal to passengers and crew of a jetliner as this case seems to indicate. Even if an engine malfunctions and blows up, the way a 737 is designed, the pilot should still have the ability to get the jet onto the ground with at least some chance of saving the people on it. Or, if not, the pilot should certainly have the ability to radio the control tower that they’re having an engine malfunction. Or, if not, the plane’s transponder certainly shouldn’t stop working at exactly the time it begins to drop from the sky in a fireball.

The Iranian in charge of the scene said the radio transmissions ceased at the time of the “engine malfunction,” which probably makes him a less-than-convincing liar or perhaps someone doing everything he can to tip off those willing to give this a serious examination without earning himself a visit to the torture chambers of Tehran’s Evin prison. Then there are eyewitnesses claiming to have heard two explosions in the air before the plane crashed to the ground, something that isn’t all that dispositive but shouldn’t be ignored.

What is dispositive, to anyone paying attention here, is that the Iranians now say they won’t turn over the plane’s “black boxes” to Boeing for analysis. There is a very, very obvious reason why.

So yes, it looks like what happened was that one of the Iranian regime’s SAM operators made a mistake and blew that jet out of the sky. They’d just fired those 15 missiles across the border into Iraq with what looks like an eye toward creating a propaganda victory internally (Iranian state media falsely claimed to have killed 30 Americans in that strike, a lie MSNBC unquestioningly regurgitated on air) without giving President Trump reason to retaliate. But the Iranians were terrified Trump would hit them back disproportionately, so their people, who aren’t all that good at their jobs, had itchy trigger fingers and killed 176 civilians, 80 of them being their own people, in a tragic feat of incompetence.

Here’s why this could matter far more than anyone credits: it’s the kind of thing that can badly shake a regime already grossly unpopular with its people. The Iranian government is so hated by the man on the street in that country that in November the Quds Force, the terrorist thug army commanded by Qassem Soleimani before he was reduced to considerably less than the sum of his parts a few days ago, murdered some 1,500 people for protesting.

What the regime is currently surviving on is brutal repression, and the public perception that to oppose it is futile and suicidal. But when the average Iranian sees a Soleimani blown up in Baghdad, recognizes the regime was too afraid of the Americans they’ve promised to annihilate for 40 years to actually draw blood to avenge their man (but not too afraid to lie to their own people about it), and then kills 80 of their countrymen through sheer incompetence while angering Canadians and Europeans into participating in strengthened sanctions to further cripple an already dead Iranian economy, it can create an environment volatile in ways the regime won’t like.

Iran looks like a country with a failing government. Shooting down that jetliner and killing their own people by accident is indicative of it. And all of the lies badly told will only make things worse.

Be watching for further signs that the Iranian regime is on the ropes. You’ll see them if you’re looking.