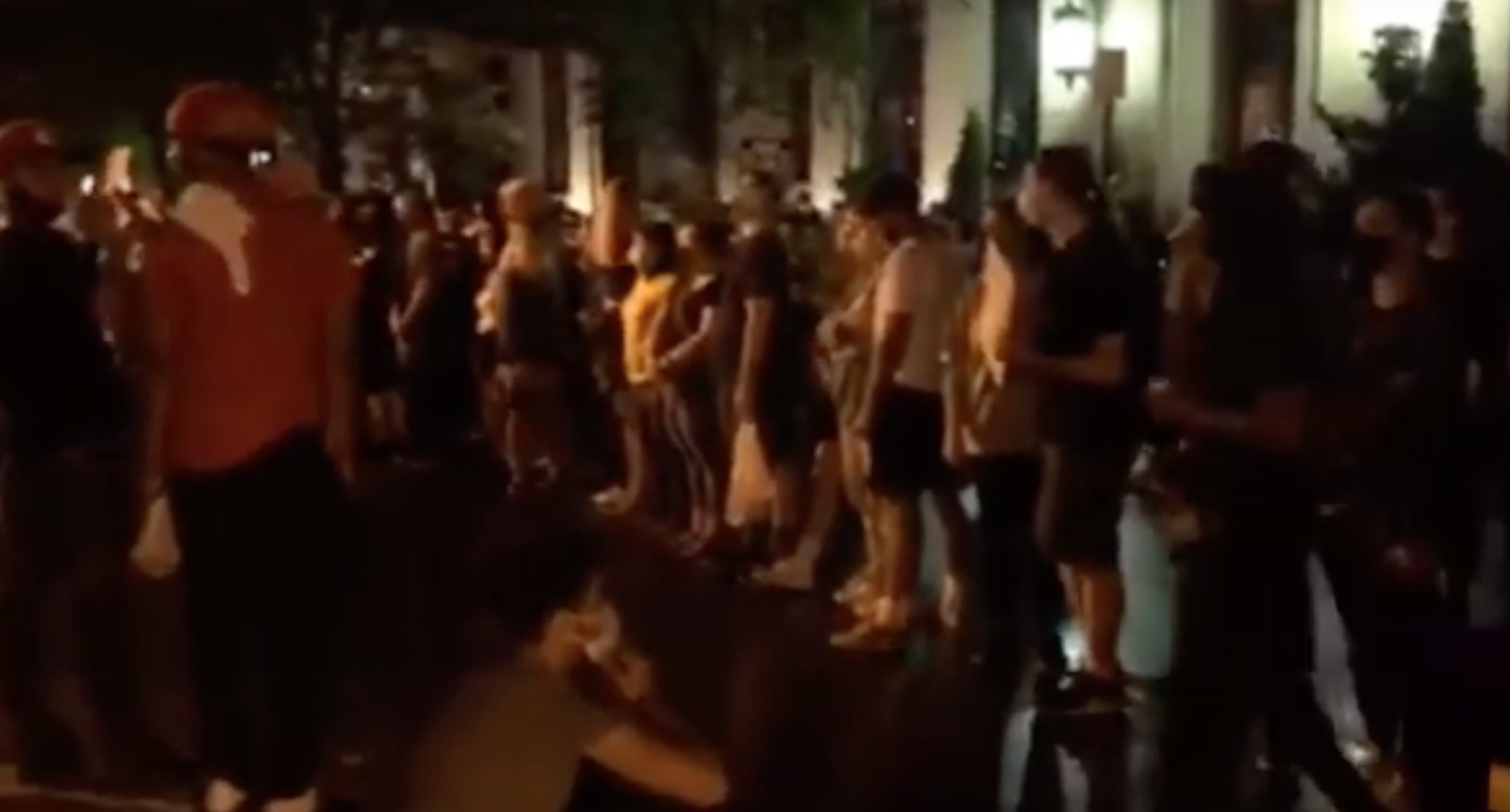 The lies started almost as soon as it was reported that police had fatally shot a suspect in Lancaster, Pennsylvania. Black Lives Matter (BLM) activists on Twitter falsely claimed cops had shot a black teenager, and thus began the predictable cycle of outrage leading to a riot in which “protesters” smashed windows and set a dumpster on fire.

In fact, the man shot by police Sunday afternoon was 27-year-old Ricardo Miguel Munoz. Police had been summoned to a residence where Munoz had reportedly become “aggressive” toward his mother. Officials quickly released the bodycam video showing what happened. As soon as the first cop showed up, Munoz rushed out the door brandishing a large knife. He charged at the police officer, who retreated and then fired his weapon — a clear-cut case of self-defense.

Facts don’t matter to BLM, however, and an angry mob soon gathered near the crime scene in Lancaster. Someone in the mob held a sign emblazoned, “We are done with Amerikkka. Change is coming.”

The “change” the rioters want is, of course, the election of Joe Biden as president, and it has become increasingly obvious that these violent mobs — which have wreaked havoc in cities nationwide since May — are being sponsored by Democrats who believe such “activism” will help them win the White House in November. Biden has repeatedly accused President Trump of fostering “systemic racism,” a charge that echoes BLM’s anti-police rhetoric. For all intents and purposes, Sunday’s riot in Lancaster was a Biden campaign rally.

The most important question about Lancaster has nothing to do with racism, “systemic” or otherwise. Rather, the question is why the knife-wielding maniac shot by cops was not in prison. In March 2019, Munoz was arrested on aggravated assault charges after an altercation in which he stabbed four people, including a 16-year-old boy and a 22-year-old woman. At the press conference Sunday where they released the bodycam video, officials did not explain why Munoz had been turned loose. However, Pennsylvania’s Democratic Gov. Tom Wolf has ordered hundreds of inmates released from state prisons due to fears of COVID-19, which might explain Munoz’s short stay behind bars.

Lancaster is scarcely the kind of place you’d expect BLM protests. The town of fewer than 60,000 residents sits in a largely rural county that four years ago voted for Trump by nearly a 20-point margin. Sunday’s eruption of anti-police violence in this small town could prove pivotal in swing-state Pennsylvania. Forbes columnist Seth Cohen said the Lancaster riot could “have significant national repercussions”:

As polls show a tightening race in Pennsylvania, undoubtedly voters in the Keystone State and across the country will be closely watching how Biden responds to the incident, and whether he defends the police and condemns the violent protestors in a city he just visited last week.

The incident also comes at a sensitive time for the Black Lives Matter movement and anti-police sentiment generally. Over the weekend, two Los Angeles County sheriff’s deputies were shot and injured in a violent ambush by an unidentified individual in Compton. The brazen attack on officers was widely condemned, but it also was a reminder of the perils that police officers face every day — real dangers that the anti-police protesters largely overlook.

The riot in Lancaster also shows the blatant dishonesty of BLM activists, who deliberately spread falsehoods about the Munoz shooting in their effort to incite racial hatred and anti-police rage. “Whether it’s Jacob Blake or Rayshard Brooks or this shooting in Lancaster, BLM doesn’t give two damns about the facts of any individual case,” Ben Shapiro said on Twitter. “[A]ll that matters is that the narrative of systemically racist policing must be preserved in spite of the facts.”

If voters in Pennsylvania reject BLM’s dishonest narrative, the riot in Lancaster could prove to be the tipping point that cinches Joe Biden’s defeat.