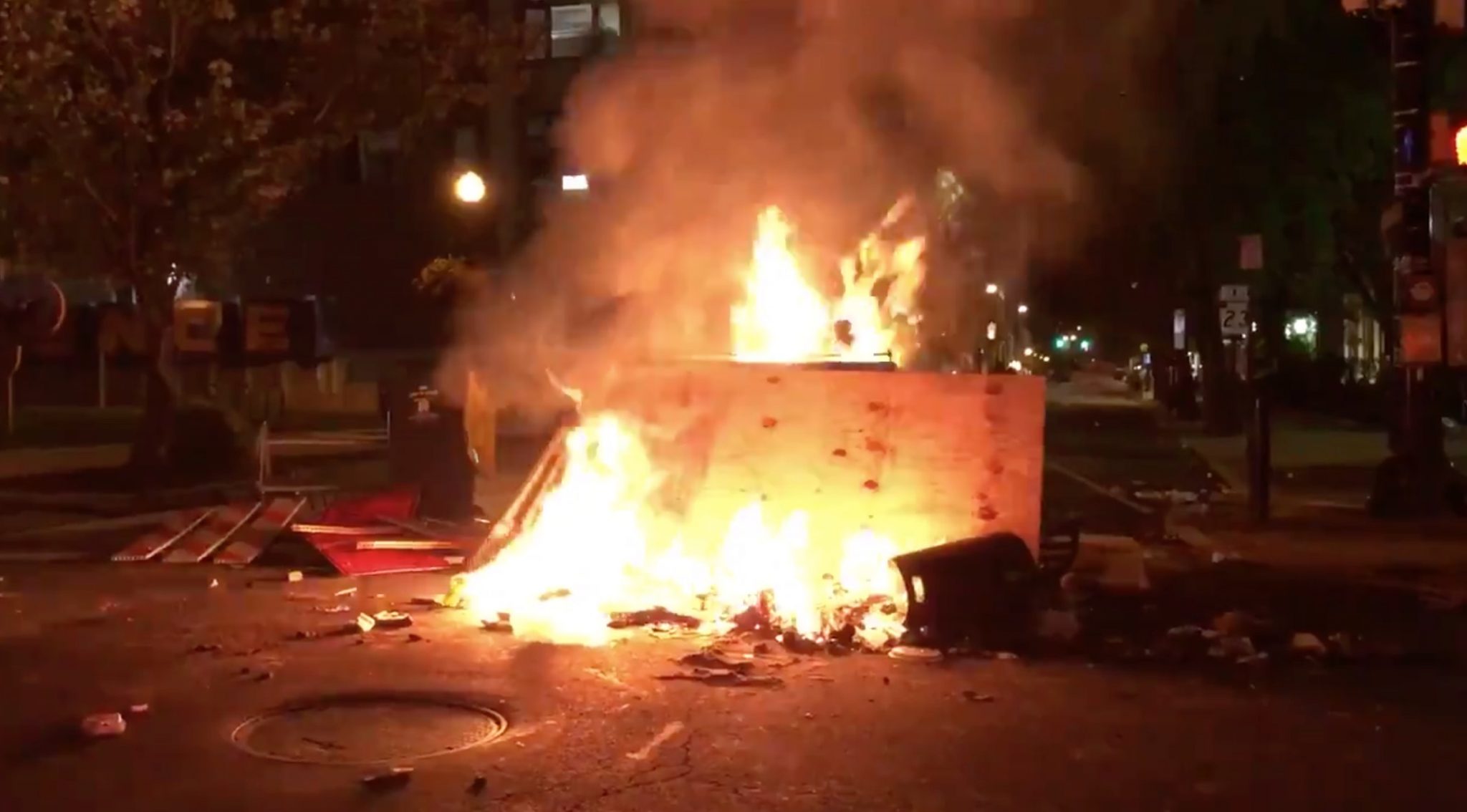 Protests were peaceful Monday night in Lancaster, Pennsylvania, after a local judge ordered anti-police rioters arrested Sunday night to be held on million-dollar bails. Unrest erupted Sunday in the small city of about 60,000 residents after a Lancaster policeman shot 27-year-old Ricardo Miguel Munoz. Activists with the Black Lives Matter (BLM) movement spread a false rumor that police had “murdered” an innocent black teenager, a claim that was disproven when police quickly released bodycam video showing Munoz charging the officer with a knife.

While the video may have played a role in discouraging further unrest in Lancaster, the suspects arrested in Sunday’s riot were still sitting in jail, thanks to Magisterial District Judge Bruce Roth:

A Lancaster County judge set bail at $1 million for some of the protesters arrested for arson and riot-related charges early Monday morning following the police shooting of 27-year-old Ricardo Munoz.

The protesters are each charged with felony arson, riot and vandalism charges, among other protest-related charges. At least six of the eight people arrested Monday morning had bail set at $1 million by Magisterial District Judge Bruce Roth on Monday night, according to court documents. One of the protesters was not eligible for bail, and another person’s docket had not yet been updated.

An additional five people — four adults and one juvenile — were arrested on Monday after further investigation, police announced Tuesday. They are still waiting for a judge to set their bail.

The $1 million bail quickly came under fire from Lt. Gov. John Fetterman and a local advocacy group, with Fetterman calling it “blatantly unconstitutional” and an infringement on the protesters’ Eighth Amendment right against excessive bail….

“It’s self-evidently unconstitutional,” Fetterman said. “Whatever the merit of the underlying charges, what is absolutely indefensible is a million dollar bail for those charges.” …

City police did not request the bail amount, said Lt. Bill Hickey, the public information officer for the bureau. The District Attorney’s office did not provide any input regarding bail, spokesperson Brett Hambright said in an email.

The protesters are charged with several felony offenses, which are considered in the judge’s equation when deciding bail, as well as the input of police.

“The crimes that these defendants are facing include serious felony offenses,” Hickey said in an email. “This is not a new or unheard of practice and falls within the rules of criminal procedure.” …

The suspects allegedly piled wood, metal street signs and trash bags to light on fire at the intersection of Chestnut and Prince streets, according to city police.

As to what these rioters “allegedly” did, the fire in the streets was captured on video Sunday night, and rioters also smashed windows. Order was restored quickly, with the help of the Special Emergency Response Team (SERT) and, as Human Events managing editor Ian Miles Cheong noted Monday night, the BLM protesters were “skittish and afraid” after learning about the million-dollar bail: “Lancaster is not Portland.” Democrat-controlled Portland, Oregon, has been the scene of weeks of violent demonstrations. President Trump won Lancaster County by a nearly 20-point margin in 2016.

One of the mysteries surrounding the shooting of Munoz was why he was not already in prison, considering that he had been charged last year with stabbing four people in Lancaster. The local newspaper reports that Munoz had originally been scheduled to go to trial on those charges in March, but his trial was postponed to October because of the COVID-19 pandemic:

Munoz was initially held in prison after failing to post $1 million bail. In April 2019, he was released after conditions were modified so that he did not have to post money, court records show. He was also placed on electronic monitoring and ordered to have no contact with the victims.

In June 2019, after court officials sought to revoke bail because Munoz was accused of staying out all night, Lancaster County Judge Dennis Reinaker kept the bail conditions in place, but ordered that Munoz get a mental health evaluation….

In May 2015, Munoz was charged with stalking, harassment and trespassing after a woman told police he showed up at her dorm at Thaddeus Stevens College of Technology and tried to kiss her and asked if she had a boyfriend, according to court documents. He was ordered to stay away from the school, but returned.

In February 2016, he was accepted into the county’s accelerated rehabilitative disposition program, a probationary program for first-time offenders, and ordered to perform community service.

Lenient treatment of criminals may seem like mercy to some people, but as the Munoz case illustrates, such a policy often has disastrous consequences. His family said Munoz had been diagnosed with schizophrenia and bipolar disorder, and had not been taking his medication prior to the incident Sunday that led to his death.

Meanwhile, among the rioters locked up in Lancaster is a sorority girl from Franklin and Marshall College. Police accuse Kathryn Patterson of felony arson, among other charges. She is a member of the Kappa Delta sorority at Franklin and Marshall, where the cost of attendance is more than $75,000 a year. For that kind of money, you might think they could teach kids how to stay out of jail.