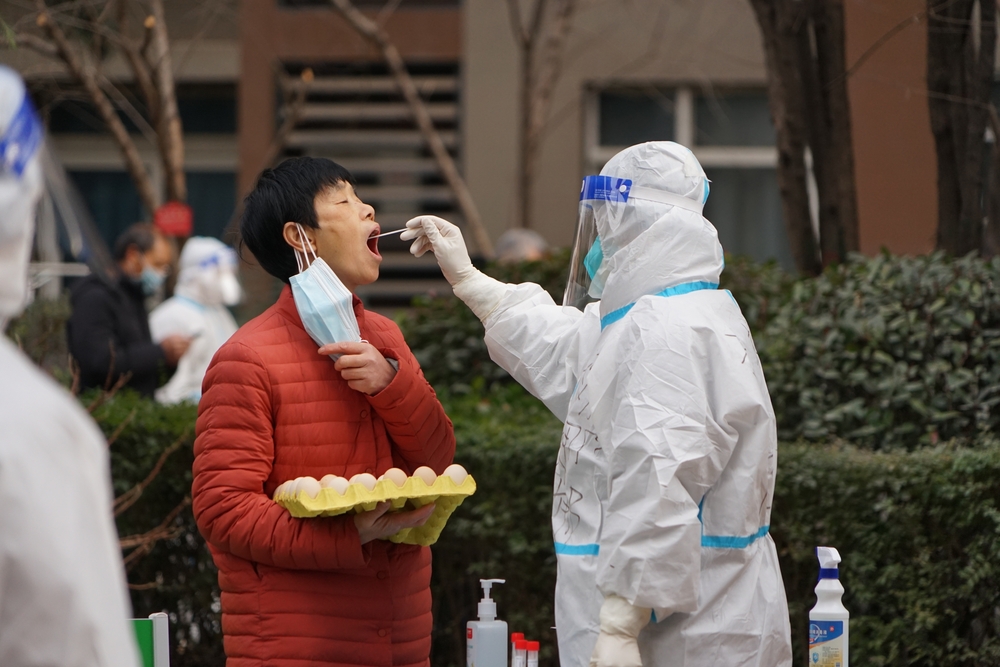 After three years of harsh and inhumane zero-COVID lockdown, the Chinese Communist Party (CCP) had to reopen the society after widespread discontent led by the “White Paper Movement.” But in apparent retaliation to the massive protests, the CCP took an abrupt measure of doing nothing, or “lying flat” (tang ping), rejecting other countries’ offers to give China more effective vaccines and medicine and allowing the virus to spread unchecked. At the same time, the CCP propaganda machine told people that the Omicron virus was just like the common cold and was not dangerous.

As always, the CCP has kept information about the type of virus and research on it so tightly that the infection rate and death rate have become state secrets. Instead, it publishes daily statistics so ridiculous that no one believes, creating a false scene of peace with low severe cases and few deaths to prove the party’s “greatness, glory, and correctness.”

When I saw this, my heart sank. Isn’t it familiar?

At the end of 2019, Wuhan was hit by unidentified pneumonia with no cure, and people infected died in droves. But the CCP tightly blocked this information. Dr. Li Wenliang in Wuhan and a few who knew it started warning people to beware of this unidentified pneumonia. Instead of being grateful to Li, the party labeled the warnings by him and others as spreading lies and punished them. Li later died from the virus.

This unidentified pneumonia then spread rapidly in Wuhan, and a large number of people died from the infection. The CCP kept the death figures highly confidential. From the long lines and piles of corpses seen at the local crematories, however, it was assumed that people were dying in large numbers from the virus. Finally, the CCP decided to seal off Wuhan. But after declaring the lockdown, Wuhan residents were allowed to flee, bringing the virus to all of China and the world, creating the global disaster of the century, with nearly seven million people killed by the virus and counting.

To effectively deal with the virus, the world, led by democratic countries, wanted to come to China to investigate the origin of the virus. The CCP was furious at such a request that anyone with common sense would have demanded. The investigation, which is a scientific effort and beneficial to the world, including China, is labeled by the CCP as “anti-China.” Of course, as some disclosures have shown later, the virus could have come out of the now-infamous Wuhan Institute of Virology, which conducted highly controversial gain-of-function research on coronaviruses. The CCP would have a strong incentive to cover it up if it were true.

By mid-2020, under worldwide pressure, the CCP reluctantly staged an investigation of the virus’s origin by the WTO, which was under the de facto control of the CCP. Predictably, the CCP-appointed WTO team found nothing while enjoying good food and nice hotel rooms in Wuhan.

To divert the world’s attention from the Wuhan virus outbreak, the CCP fabricated a story that the virus was produced by a U.S. bio lab and then brought to Wuhan by U.S. athletes. To this day, Chinese officials are still spreading this ridiculous lie. For example, the Chinese ambassador to France recently repeated this debunked U.S. bio lab COVID conspiracy with tongue in cheek during a press conference.

Fast forward to today, private information from Beijing shows that numerous people are testing positive for COVID. More worryingly, many of these people did not have mild symptoms like the common cold, as the official story goes; they did not just have upper respiratory infections, but their lungs were also infected and severely damaged. Many of these infected people have died, including a friend of mine in Beijing, who died after the infection. Many photos on the internet show overcrowded funeral homes and crematories, and hospital morgues piled high with dead bodies. Since the CCP does not release the actual death data, these photos indicate that the death rate is not negligible.

All these look a lot like the scenario in Wuhan three years ago.

Now people began to suspect that the virus in Beijing may not be the Omicron virus as we know it. China’s territory is large and has a huge population, so the chance of virus mutation is high. It is possible that the virus now appearing in Beijing is a new mutation. But the CCP never publishes this information, and we don’t know if the CCP allows researchers to work on new viruses.

Furthermore, the CCP kept reported COVID deaths low in China by using an unreasonably stringent classification of COVID death: it only allows deaths caused solely by respiratory and lung failure to be counted as COVID deaths. Deaths that involved COVID and underlying conditions and other causes are not allowed to be counted as COVID deaths. As a result, China’s daily number of COVID deaths after the reopening has been kept in single digits. Take the case of my friend in Beijing who died after contracting COVID. If the official claim is that less than 10 people die of COVID every day nationwide, he would have accounted for more than 10 percent of all COVID deaths in China in one day. Obviously, this was not plausible for a population of 1.4 billion. The joke on Chinese social media is that a man tells his parents, “All three members of our family have gotten COVID.” His parents were shocked and replied, “The government reported that there were only three cases of COVID in the whole country; how come your family got them all?!”

I have two worries about the sudden “lying flat” by the CCP.

The first is that the CCP may have this strategy: You people are not very dissatisfied with the three years of stringent control and lockdown, right? Well, we will now do nothing: we won’t release the virus data or accept more effective foreign vaccines or drugs. We’ll just let the virus destroy you. When you can’t stand it anymore, you will beg us to protect you again. And then you will thank the party for its “greatness, glory, and correctness.”

The second worry is the impact of the CCP’s lying flat on the world.

Since the party refused to provide cold and COVID medicine, they rushed to buy them from abroad. The purchasing power of 1.4 billion is not something any country can easily accommodate. Such massive buying has caused a shortage of medicines in many countries.

Another aspect of the second concern is the possible virus mutation in China.

When new virus variants appear in other countries, these countries are the first to release data on these new variants so that the world can be prepared and reduce the risk of new variants. For example, when a new variant of the virus, Delta, appeared in India, the Indian government immediately cooperated with the World Health Organization to release data. And when Omicron appeared in South Africa, the South African government quickly collaborated with the WHO in releasing data. This is what all countries that value life and have basic moral responsibilities should do.

By not releasing data on the new occurrences of the virus, the CCP is irresponsible not only to the people of China but also to the world. The world is kept in the dark about what new virus variants are now appearing in China, preventing the world from developing new vaccines and drugs to counter the new mutations. This situation is very similar to the last Wuhan virus outbreak. The CCP promises to “build a community with a shared future for mankind.” If virus outbreaks, Wuhan style, are the future the party wants to share, the world must say “No!”

The world, especially the democratic countries, the World Health Organization, and other international organizations, should make a strong demand to the CCP to let the Chinese people access more effective vaccines and medicines from foreign countries, immediately release information about the new mutations of the virus, and cooperate with the world to investigate the origin of the virus in China. These will help the world, including China, to prevent another virus outbreak like the one in Wuhan in 2020.

Shaomin Li is Professor of International Business at Old Dominion University and author of The Rise of China, Inc.: How the Chinese Communist Party Transformed China into a Giant Corporation.