by Melissa Mackenzie
President Joe Biden speaks to the press on voting legislation on January 13, 2022. (Youtube/Reuters)

Jim Gaffigan said on Joe Rogan’s program, “I’d still take Biden’s corpse over Donald Trump.” Congratulations, elites! You’re now being governed by a political corpse. Elites will be fine with a dead president governing a zombified American economy and society. Working and middle-class Americans? Not so much.

How dead is Joe Biden’s political life? Joe Biden is so toxic politically that Stacey Abrams, governor of the Georgia of her mind, refused to stand with him in the state she ostensibly governs about the legislation that is her signature issue: codifying the ability to commit election fraud at the federal level. Abrams was absent while a bunch of masked black people stood stoically behind the bellicose president. The optics were bad in every aspect. The content was worse. 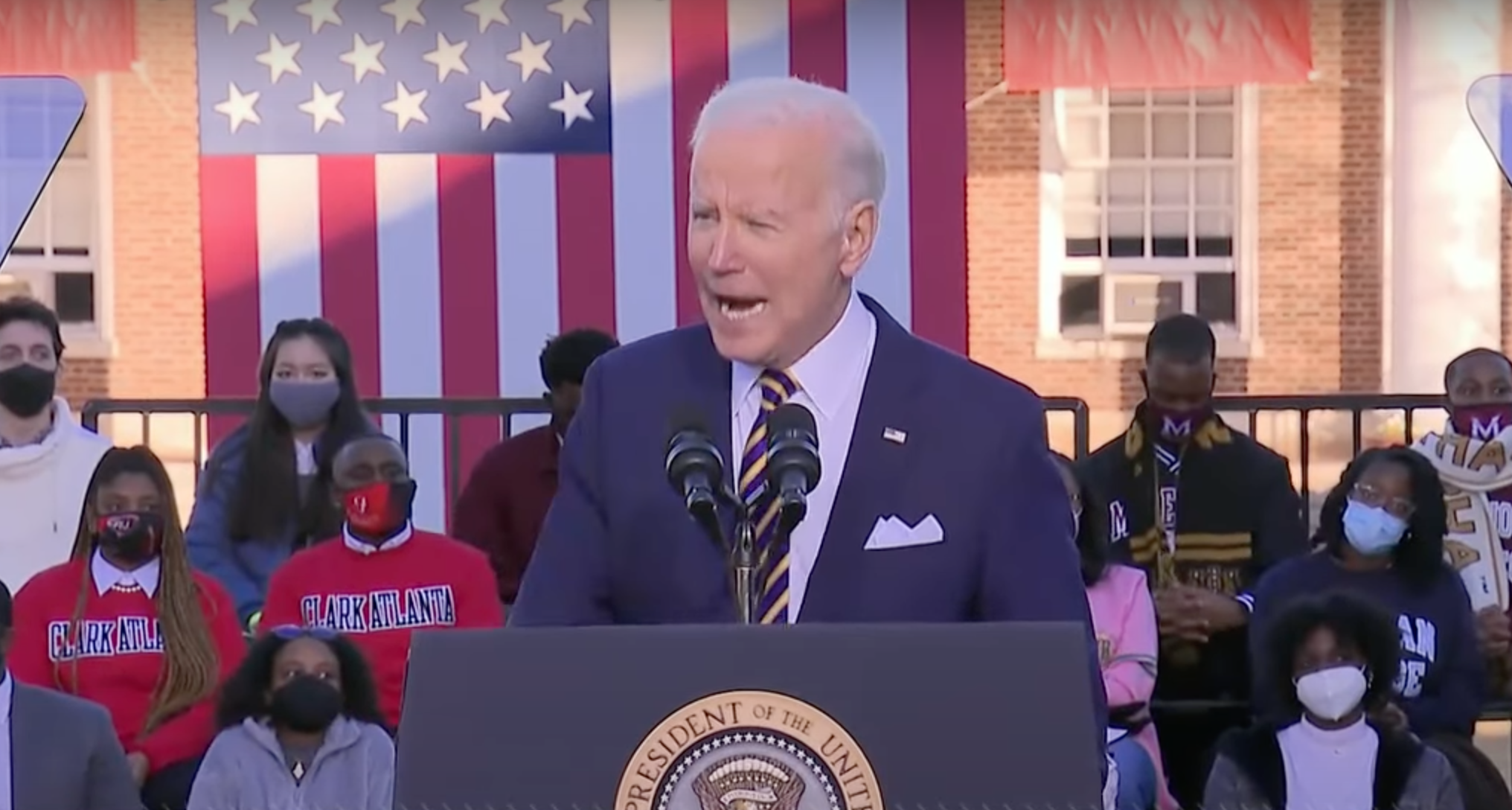 Biden, violating Never Trump’s beloved norms, spoke like an inflamed demagogue, demonizing his political enemies and couching legislation to nationalize [stealing] elections in civil rights terms. It was an embarrassing day all around.

My 104-year-old grandma has a mantra that she probably learned from her parents: “Democrats are good at two things: Raising taxes and starting wars.”

Democrats have had their tax-raising dreams in Build Back Better busted. Now comes the war. It’s not a foreign war, this time. It’s a war against America.

Losing legislatively over and over by governing domestically like Bernie Sanders on a bender has diminished Biden at home. Losing in Afghanistan, whining to Putin, and pussy-footing with Iran reveals Joe Biden to be a feckless mess. Combining it together gains the president a 33 percent approval rating.

Biden has lost the will of the American people.

Wait, that’s not exactly right. He’s lost the will of everyone except the elites who made him.

He is their perfect representation: not as smart as he thinks, vicious, bigoted against those with whom he disagrees, and wrong on the merits of nearly every policy one can name.

Watch CNN, for example. Joe Biden is rolling along, being a fantastic president. Maybe CNN isn’t a good example as the place is rife with pedophiles. They have judgment problems.

Spend some time scrolling Twitter. Follow the public intellectuals and political commentators both left and right. Nary a negative word about the bumbling Biden. On the contrary, there’s almost universal agreement among these elites that the real problem in America isn’t Biden, his policies, and his executive decisions, but the American people themselves. Oh and Donald Trump!

Stephen Hayes and his Conserving Conservatism Pals for Biden™ at the Dispatch said today:

Remember, the fault of the current presidential disaster is that Trump violated norms. It’s not that the whole of the bureaucratic elites in D.C. and the media violated norms by calling Trump a Russian puppet for four years. It’s not that these same people screeched about COVID, pretending that a president could, by sheer force of will, make a highly contagious virus magically go away.

It’s not that the elites have systematically destroyed the trust in American institutions over and over by lying. The media is a confabulation machine in service to the Democrats. No one believes them. They have destroyed the lives and reputations of the innocent — Nick Sandmann and Kyle Rittenhouse. They’ve excused actual domestic terrorists like Antifa and BLM. They’ve turned their heads from hate crimes like a BLM true believer mowing down a Christmas parade filled with children and dancing grandmas. They’ve lost all authority.

The media is a confabulation machine in service to the Democrats.

The media are the people who trumpeted that Joe Biden was a moderate: a good, kind guy, a uniter, a measured force. That was a lie, to put it charitably, and it flew in the face of his over 40 years in American politics. Those who were sickened by Trump’s bombast and mean tweets ignore Biden’s shamefulness.

The FBI is a disgrace. It has shown itself to be the police force of the Democrat Party. Where the FBI once was respected, it is now viewed with profound distrust and outright revulsion. Ted Cruz grilled one of the top brass and she couldn’t say that FBI agents did NOT incite violence on Jan. 6. Today, the FBI raided the leader of the Oathkeepers. A bunch of men were charged with sedition. This crime is difficult to prosecute, nearly impossible, because it so often involves taking intemperate speech and using it to indicate a possible future crime. In this political environment, though, anything is possible. The FBI has been marching dudes with khakis around D.C. and Chicago. Oh, they’re some scary-named activists but everyone in America looks at them and sees feds. It almost doesn’t matter what’s true. No one believes the FBI or media or their nexus, the New York Times.

The Department of Justice? Right. They’re creating a new Domestic Terrorism Unit. This, the group tasking the FBI to go to school board meetings and track anyone angry at the COVID rules, woke diversity training, terrible test scores because kids haven’t been educated, and yes, even being outraged at sexual assault that has been covered up in their schools. The DOJ is scouring America for patriots to persecute while letting America’s cities descend into chaos.

Name an elite organization and you will find a discredited one. And the people who run these institutions told the American people that they knew best. They told America that Joe Biden was best.

To a person, these cheerleaders are discredited. Biden isn’t just distrusted on topics as wide-ranging as the economy and foreign policy, he’s openly being disrespected and scorned because he is utterly disrespectful to Americans. It is not because Americans are stupid bumpkins, much as those breathing the rarefied air behind their masks like to think. No. Americans were betrayed by the very people who should know better, who did know better, but who hated Donald Trump so much they were willing to sell their reputations to cheerlead an abject fraud into office.

It’s kinda perfect, really. The haughtier of the smart set bullied Biden into office. He is their perfect representation: not as smart as he thinks, vicious, bigoted against those with whom he disagrees, and wrong on the merits of nearly every policy one can name. When he’s repeatedly shown that he is wrong, he blames those who were right, but who he perceives as beneath him. Sounds kinda familiar. He’s a lot like the people who promised America he’d restore norms.

All hail, Joe Biden! King of the elites.