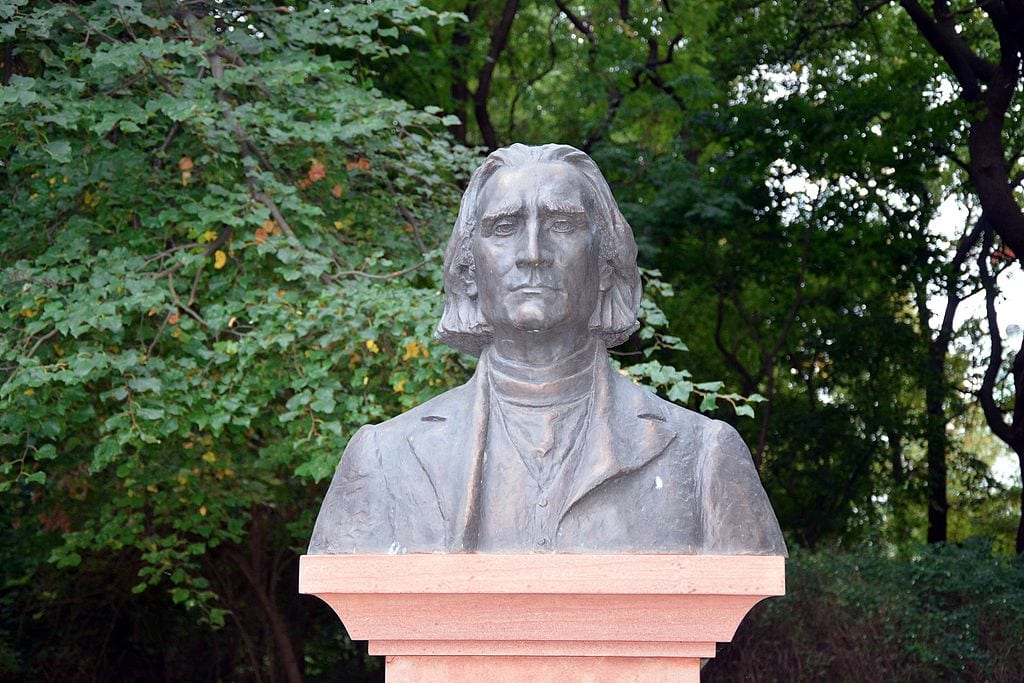 Frederik Chopin was a Polish pianist whose passionate compositions continue to stir the soul. His music is associated with the doomed 1830 uprising against Imperial Russian rule, foreshadowing the fights for freedom against Nazis and Communists in the 20th century.

Franz Liszt was sort of a Hungarian Chopin, like him a piano virtuoso and a great Romantic composer and supporter of the Hungarian national cause. He was moreover an innovative performer, who pioneered playing the piano in concerts by heart. If you took piano as a child, you recall that you had to read the damn music while keeping your fingers on the keys; but if you have been, since then, going to concerts, you probably noticed that many pianists are not reading sheet music, though sometimes they are and they have a special assistant on hand to turn the pages.

It should not surprise that when a young Hungarian prodigy named Adam Gyorgy gives a solo recital — as he did Sunday at American University’s Katzen Arts Center — he should choose some of the most beloved of the Chopin and Liszt repertoires. He played a nocturne and mazurkas by Chopin with a feeling and a touch that would have moved even Arthur Rubenstein or Vladimir Ashkenazy or, by Jove, Van Cliburn! Glenn Gould! The passion, the perfect touch, the total commitment of Gyorgy’s playing left the packed Abramson Recital Hall in nervous rapture. From Liszt, he chose the Rigoletto Paraphrase and La Campanella, perfectly balancing the power notes and the subtle ones, punctuating seriousness with humor, and leaving the raptured even more in nerves.

Gyorgy played, like Liszt, without sheet music, and, again like his great predecessor, with undisguised feeling and uninhibited physical demonstration. It was technically all in the fingers but it was a whole body performance — from the heart and brain, both.

You could not ask for better. And yet you got it: for in his first piece Gyorgy played improvisations on Hungarian folks songs that he composed in collaboration with the genius jazz pianist Keith Jarrett, and, in conclusion, Liszt’s Hungarian Rhapsody No. 2. These two works demonstrated a range and an originality and an intelligence that put Gyorgy in a very select circle of instrumental masters; his obvious relish for moving outside the classical repertoire even as he clearly loves it will make his one of the most interesting careers in our times.

Gyorgy’s sound, clear and distinct, flowing and yet arresting, is the kind of experience that makes you believe in — in music! One hand was pushing the beat and keeping you in suspense while the other hand took you on magic flights of rhapsody and — what’s the word? — love. I am glad my better half was sitting next to me, because if she had not been there and someone else had, good Lord. But it was her I kissed.

It was romantic, if you ask me. I was pleased to see that in the packed concert hall were many people who appeared to be serious students of Chopin and Liszt and who were visibly moved by Adam Gyorgy’s performance. Little did they know that they owed this artistic, should I say spiritual, experience, at least in part to the Hungary Initiatives Foundation, which had a hand in marketing the event. Now if we did this — which by the way we used to do, back in the days when our State Department invited such geniuses as Duke Ellington to perform under foreign skies — instead of exporting political correctness, would not our Republic be more greatly admired and emulated?

But why carp. Rather, I must study Samuel Lipman and Nat Hentoff and learn how to write about music, but in the meantime, if you want to experience a sense of being lifted into a higher sphere by a man doing absolutely fantastic things with both hands on a keyboard, producing sounds you did not know existed and in combination and simultaneously with other sounds you also did not know existed, catch the next Adam Gyorgy concert if it is within a 500-mile radius of wherever you are — or even greater — and be there on time.