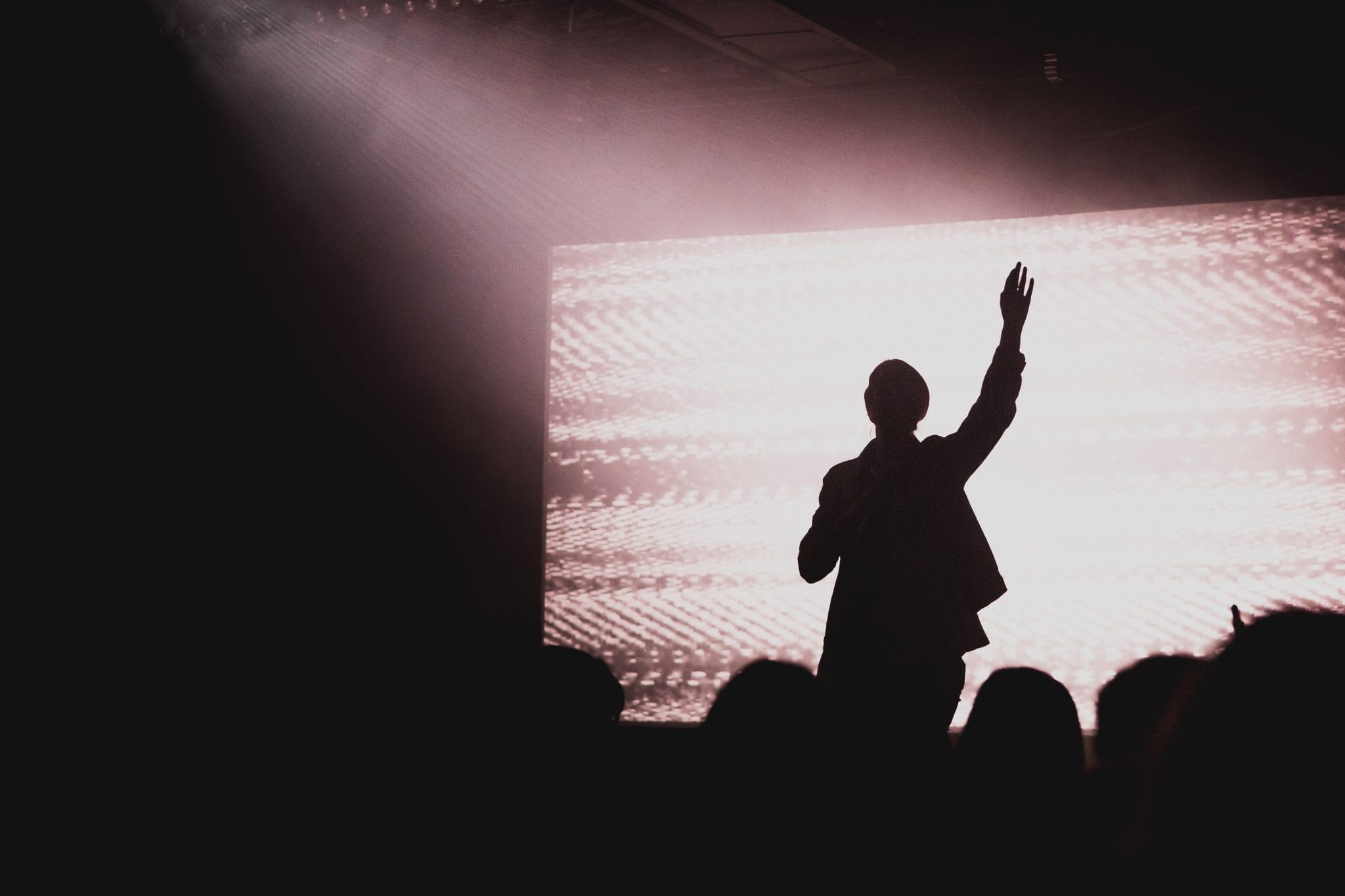 I talked with a good buddy of mine the other night about the Contemporary Christian Music (CCM) takeover of my denomination, the Lutheran Church–Missouri Synod. Needless to say, we didn’t break any new ground. We’ve been complaining about this for 30 years — always the same arguments, always the same irritation, always the same, at the end, resignation.

He always ends up blaming the music. Some of the old-style hymns we sing can be pretty stodgy, he says, and tend to turn off young people. He proffers hymn titles like “I Come, O Savior, to Thy Table” as examples and says, “They don’t want to sing these lugubrious dirges, played torturously slow by the organist. That’s why they go contemporary.” He thinks if we had more lively but still sacred-sounding hymns composed by Herbert Brokering and Martin Franzmann and their kind, the legions that fled to the 7/11 world would come streaming back into our sanctuaries with a newfound enthusiasm for march time, musical notation, and pipe organs.

I always end up blaming our educational institutions. For the past 30 years, or more, our seminaries have been pumping out pastors who, once they get into a parish, abandon what they were taught about liturgy and music and go over to the happy-clappy side. “You’d think a seminary that espoused the traditional liturgy would produce pastors who believed in the historical liturgy and had enough sand to defend its theological warrants!” is what I tell him.

We disagree on why we got to where we are, but we agree that we’re there.

Any casual tour of my denomination’s churches will reveal how right we are. Rare — practically unknown — is the church that has not bent at least one knee to this movement. Some pastors meld contemporary songs with organ-led hymn singing and call it a blended service; others establish rival services, one for the traditionalists, one for the moderns. Who knows how many churches have installed the furniture of rock ’n’ roll in their chancels — the amps and music stands and keyboards and drum kits and microphones — and affixed disagreeable worship screens to the front walls.

If it’s any consolation, we have plenty of company in the Christian world. The National Congregations Study, published in 2015, a survey of nearly four thousand congregations from across the Christian spectrum undertaken by researchers at Duke University, found traditional aspects of worship in decline. Between 1998 and 2012, congregations that used choirs in worship decreased from 54 to 45 percent; those using organs dropped from 53 to 42 percent. But use of drums — a big uptick there: 20 percent of congregations used drums in 1998, 34 percent in 2012. Churches printing bulletins fell from 72 to 62 percent. The use of projected images (translation: worship screens) skyrocketed by 23 percent in the same period. Informality in worship is way up (shouting “Amen,” wearing shorts to church, toting a “go cup”); formality way down (calling the minister “Pastor Last Name Here,” dressing up for services).

That’s the trend line for the historic liturgy — down, down, and down. Which brings up the question: What now? Seriously, what is going to happen to liturgical worship in the foreseeable future?

We can trot out all the usual criticisms in an effort to turn the CCM crowd’s head. The songs are repetitive — they don’t get the moniker “7/11 songs” for their lyrical sophistication. A lot of them are performance numbers open to interpretative treatment, and thus less than optimal for group singing — which, when coupled with the amps being cranked up to 11, explains why nobody sings at contemporary services. As for content, CCM numbers do not exactly limn Augsburg Confession–level theology. Many are filled with pious generalities, acceptable to the full range of Christian denominations, and even some non-Christian religions. And they’re all about me, me, me, focusing on how I feel about God, whereas the really good news, the news that uplifts us, pertains to God’s “feelings” about us.

Not only do our criticisms fail to gain purchase but we get pushback. None of that is new, either. It’s all adiaphora, we’re told — the Bible prescribes no worship style. We hear the old evangelical style–Lutheran substance stuff that we heard in the ’80s and ’90s: we keep our doctrine but just package worship in a different way, a better way, like the evangelicals do, whose churches, in case you haven’t noticed, are packed every Sunday with excited worshipers singing contemporary songs. We’re told it’s what the people want, that CCM speaks to the modern heart and doesn’t turn people off like the dry, old-timey worship does. It appeals to the youth, the lifeblood of any organization. We’re told it’s a generational thing, it’s a relevance thing. We’re told churches that don’t do it will die. All of which boils down to one thing: people like it; it’s popular. It puts fannies in the chairs.

And to make matters worse, the religious landscape has changed dramatically since CCM burst on the scene a half century ago. We used to argue that the form itself was incongruous. It was rock music, after all, albeit of the easy-listening, KOOL 105 sort. It had no place in a room with pews and stained-glass windows and time-honored chancel appointments, where the sounds of worship for a quarter-millennium consisted almost entirely of voice and organ. The associations were just too strong. You simply didn’t do rock music in church.

Pop-style melodies overlaid with a patina of religiosity in the form of Christian lyrics gave off a secular vibe regardless of any sacred intent. Just as one associated the chorale, the measured musical cadence, the march time, of a hymn, with Christian worship, one associated pop music, with its ubiquitous back beat, with the secular world, with concert venues and dance clubs. If you pasted pious words to a Van Halen melody, you’d still be doing Van Halen. The music itself would still call up mental associations of hair bands and Spandex.

We can’t make that case anymore. The form of rock music has become the form of religious music for much of the church. For everybody under forty who has grown up with the CCM movement, CCM is what the church is all about. They’ve probably attended worship services with CCM, and only CCM, since they’ve been going to church. Put them in a big darkened room where throngs of people stand waving their arms back and forth, with strobe lights scanning the walls and ceiling and pulsating guitar riffs bombarding their ears, and maybe a smoke machine pumping out water vapor on the platform, and they think they’re doing church.

That’s what makes the situation so dire for traditionalists. That’s why the fear is real: liturgical services are doomed to die when the people sitting in the pews of those liturgical services die. Which, incidentally, if you canvass the amount of gray hair in those pews, might not be that far into the future.

And on top of that, we are fighting the Zeitgeist — in all its casual, militantly informal, unprescribed, instantly-connective power. It is supremely countercultural to attend a somewhat formal event in an odd-shaped building with strange furniture, and continually stand up and sit down, and sing measured, largely unsyncopated, straight-time songs from a book you hold in your hands. And to do that for an hour, or more, without looking at your phone? It is, as they say, a tough “ask.”

But the Zeitgeist may have thrown us a bone. Although the intra-Christian movement seems to be in a contemporary direction, outside the church it’s a different story. A recent survey by Gallup showed that church membership has dropped by about 20 percent in the last twenty years. While that is not news any of us can exult in, the major group staying away, the “nones,” are millennials, the famously “spiritual but not religious.” While Americans born in 1945 or before indicated they belonged to religious institutions to the tune of 68 percent, only 42 percent of millennials claimed the same. The numbers from other studies are similarly dire.

This demographic represents a fertile mission field. What do they want? It seems millennials are not particularly keen on following their parents and, yes, grandparents — it’s the boomers who are the biggest backers of CCM — into the big boxy rooms with stackable church chairs and worship screens. Jonathan Aigner, writing in Patheos, says millennials are “seeking old ways of doing things.” They are demonstrating “an increasing rejection of the church of the 1990s and 2000s. More emphasis is being placed on liturgy and community, and less on using corporate worship chiefly as a contrived evangelistic tool,” Aigner claims.

They may not attend church, but the overwhelming majority of millennials aren’t atheists; two-thirds still believe in a higher power and 20 percent still pray every day, according to a PBS NewsHour interview with Harvard University’s Casper ter Kuile in 2017. While the report championed alternative forms of community that functioned as religious groups traditionally have — like dinner parties for the grieving, lifting weights and climbing ropes with the dedicated like-minded, yoga and meditation — one can’t help but think such content-lite, interiorizing, gnostic forms of religiosity will eventually be found unfulfilling.

The “spiritual but not religious” crowd might at some point want to attach theological muscle to their skeletal spirituality, sinews that derive from something more authoritative than their feelings. They might even want to lock into a ritualistic form that emanates almost totally from a sacred text, that gets them out of their own heads and into an objective presentation of God’s grace acting on their lives.

The historic liturgy checks all those boxes. Its elements are taken directly from Scripture, and it conveys the gospel message of sin and forgiveness in an effective and beautiful way, even apart from whatever good news is promulgated from the pulpit. We have confession and forgiveness built into the script, so to speak, and then forgiveness realized in the Eucharist.

The hymns, as well, convey that gospel in all its glory and beauty. The poetry is refined, serious, elegant, espousing a vocabulary suitable to the holy place in which it is sung. Our forebears in faith sang many of the same melodies, with the same words, thus offering us a spiritual connection to the church down through centuries, even millennia on occasion, when we sing historic, ancient hymns. New hymns by creative, traditional hymnwriters are breaking into the rota as well, putting lyrics to sacred-sounding melodies that will appeal to seekers serious enough to want theological meat in their Sunday morning menu.

Is it possible that young people, when they seriously pursue spiritual fulfillment, will move away from content-lite, culturally conforming, ever-new and novel worship practices and toward a style of worship and hymnody that has nourished Christians for millennia?

The survival of traditional worship may depend on it.