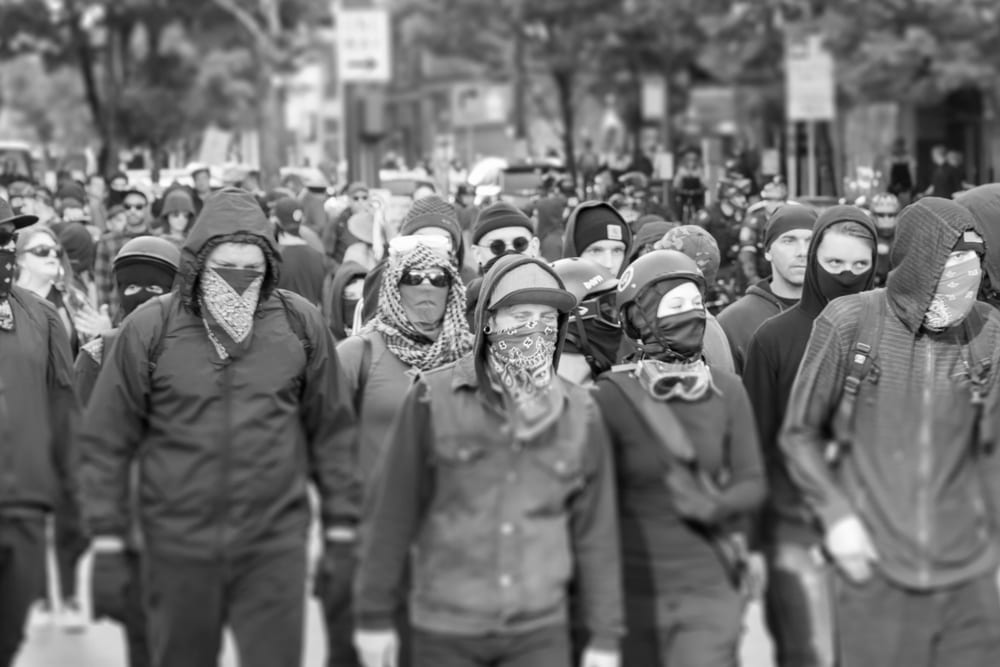 Finally, some pugilism! The candidates (save Bloomberg) have been at this long enough now that some real, heartfelt hatred has developed between the candidates. The masks came off in the Nevada debate.

The overall impression is of angry, snarling socialists trying to out-commie each other. Listening to their actual words and belief systems spilling out like bilge into the oceanic body politic is at once disgusting and enlightening. Finally, Americans are getting an earful of what Democrats believe. The worldview is paranoid and delusional, laced with toxic envy, irresponsibility, statism, and redistributionist fatalism. The world is terrible. The State will save you. Rich people are evil, and we must take their money. Life is hopeless, so murdering babies is actually what’s good for them.

Let’s do the worst first and move through the candidates.

Joe Biden: Old man Joe, what a mess. Joe Biden has always been Obama’s fat girl — the guy he kept around because he was dumb, greedy, and malicious, but never any competition. Obama is not as smart as his fangirls think he is, but he’s good-looking and knows how to dress, and that impressed the mean-girl media, who desperately wanted a seat at his table. Well, move over, hussies, Joe Biden has a spot at Obama’s right hand. But he’ll never outshine Obama. He’s easily paid off. He’s a mumbling aw-shucks buffoon covering a vicious soul. He’s the perfect lackey. Lackeys don’t make good alphas. They succeed precisely because they can never be more than second fiddle; they don’t have the sociopathic malice to be in charge. And that’s why Biden is crumbling now. He’s the only likable candidate, but he’s stumbling and fumbling under pressure. He doesn’t have the heart for the kill shot like Elizabeth Warren or his BFF Barack. Joe Biden is finished. He just looks old. And yes, he would still fare best against Trump, but the foaming-at-the-mouth hordes will have none of it.

Chances of being president: 0 percent.

Amy Klobuchar: Angry Amy strikes. This is a woman who despises stupid people, and everyone is stupid. It’s not that she’s wrong, per se, it’s just that that kind of barely concealed hostility tends not to play well with people. Her hatred of the very stupid, young, opie-looking, no-talent, no-accomplishment, man-boy Buttigieg is comical. She hates him, and she’s right to hate him. He comes across as “Golly-gee look at me Ma, no hands!” Underneath, though, is a killer. Hypocritical, young and dumb, but arrogant and sure of himself, Pete is the embodiment of feminist loathing. So Amy loathes him. She got in some licks, but it was at her own expense. She’s cooked her own goose. Politics is about pretending, and Ms. Klobuchar can’t do it.

Chances of being president: 1 percent.

Pete Buttigieg: Pete is not as cute and smart and nice as he seems. He’s the young phenom, but there’s no there there. He is to Democrats what Marco Rubio was to Republicans: a young-looking, well-spoken, talented guy who said all the right things but felt wrong to more than half the primary voters. I say this as someone who really liked Rubio and missed the signs of failure myself. There will be a small, bitter coterie of Buttigieg fans who cling to him and whisper “if onlies” to themselves and post them on Twitter when they’re drunk. But he’s not the guy, and they’ll have to get over it. Prediction: In the coming months and years, he’ll remind people of his flaws, and then his fans will be embarrassed. But if they’re anything like Rubio’s crew, they’ll never, ever admit it.

Chances of being president: 2 percent.

Mike Bloomberg: Hahahahaha! Welcome to the party, pal. Mike has received adoring press, mostly because he 1) owns it or 2) bought it. Either way, the love affair is over. Every candidate went after Bloomberg and for good reason: the setup is unfair. You don’t just get to come in halfway through a bruising primary season and have your ass kissed. Oh no, the others who had to work their tails off to be on that stage will be out for blood. Here’s the thing that Bloomberg knows, though: All he has to do is endure the pummeling. Money buys a lot of things, especially Democrats, and if they sense he’d beat Trump, the try-hards on the stage are toast. So the NYC mayor patiently took his beating and today has probably launched a billion-bot army to fight on his side. Now, here’s the problem that the higher-ups in the Democrat party don’t see, just as the Republicans miscalculated with Romney. Obama was eminently beatable, but the Republicans chose a pale comparison to Obama in Romney: technocratic, dapper, intellectual-seeming, crafty, arch. But why buy the imitation when you can get the real thing? That’s the problem with Bloomberg: He’s a pint-sized, richer version of Donald Trump without the flare and fun. He’s also way more autocratic and a little scary. So he may well be the nominee, but he won’t win for the same reasons Romney never could either: he is the knock-off brand.

Chances of being president: 47 percent.

Elizabeth Warren: Ms. Warren has all the traits Americans love in their politicians: an ability to lie with utter conviction, a killer instinct, and pervasive psychopathology. If Warren was a likable man, she’d be a shoo-in. The problem is that she’s not — likable or a man. Her kinetic energy is problematic, and with the sound off she looks like a wild-eyed weirdo. With the sound on, she is a woman with a plan who has a plan for a plan that all ends here: rich people are bad, socialism is good, and screech! She savaged Michael Bloomberg by comparing him unfavorably to Trump. This was like meth for the caffeine-addicted, a pure shot of speed into the veins of the media, who loves her. Bitter about their inability to push Hillary’s carcass over the line, the media has decided that a more energetic, more enthusiastic psychopath is the answer. She is a woman. It’s her time. Except it’s not her time. She’s stolen her policy positions from Bernie and doesn’t feel real to the teeth-baring Antifa thugs making up the Bernie, and now the Democrat, base. Elizabeth Warren of all the candidates is the one who genuinely scares me. It’s a relief to know that she won’t be the nominee.

Chances of being president: 15 percent.

Bernie Sanders: Badass Bernie is back. After his heart attack, he seemed to take the doctors’ advice and ease up a bit and calm down. He seemed genuinely grateful to be alive, and he was more likable. No more. Bad Bernie is back, and he’s an angry elf. I was watching the debate with a friend, and we paused it for a second to talk. Bernie was mid-word and his face was a rosacea mask of murderous rage. Gah! One can stop the TV at any time with him and the expression is always the same. Why? Because communists are very, very angry people. Never mind that Bernie got rich being a “public servant.” Never mind that America is in the throes of an economic boom. None of that matters. The world is unfair. There shouldn’t be rich people. The contempt when he beheld Mike Bloomberg was menacing and a bit terrifying. It’s easy to imagine him leading the Antifa mobs, pitchfork in hand, hunting down the billionaires, millionaires, middle-class — anyone with education, a job, and ideas that contradict his. He is an American Hugo Chavez, and he has the support of the youth and, it seems, the majority of the Democrat party. He’s the nominee unless the Democrats find a way to supplant him with Bloomberg or Hillary.

Chances of being president: 40 percent.

There was one telling moment during the debate. Michael Bloomberg was asked if he felt that he deserved his money. He responded that he did because he’d worked very hard for it and earned it. A bit later he asked (and this is a paraphrase), “I’m the only one on this stage who has started a business, right?” The stage, audience, and debate moderators were silent. That question, more than any other line by the psycho-socialists, landed — not for the Las Vegas commie audience, but for the TV audience at home.

Most Americans work. Most Americans, through their work, are building something for themselves, for their companies, for their country. There are over 28 million small businesses in America, and those small businesses employ people. They risk their capital and their time, they remortgage their homes, they scrap and work. They employ over 50 percent of American workers. These folks do not want to hear this bull**** about socialism and redistributing their wealth. Here is some more small business data.

All of the folks on the debate stage, save Bloomberg, have built precisely nothing. Trump is used to building things, and that’s obvious from how he approaches governance. He’s continually frustrated with the bureaucratic tendency to focus on minutiae and get nothing done.

The animus against Trump betrays the deep insecurity that those who dwell in the theoretical have for those who have lived in reality. Like couples without children and their opinions on parenting, the media and political types have never built a business, survive off the largess of risk-takers, and have opinions about things they know nothing about. It’s why they love Elizabeth Warren. She’s the perfect, theoretical, college-professor candidate. It’s why the Dem base loves Bernie: he spouts ideas that only college students could love because the ideas only make sense to people with no life experience whatsoever.

Democrats like James Carville know this is a disaster for their party. But oh, well. This intersectional, socialist, ravening mob was nurtured in elementary school and finished in college. The really rich white kids who are woke and live in cities and are cloistered ideologically have never been challenged. These folks are why they took Hillary’s loss so badly. They couldn’t fathom someone holding a different worldview from their own.

This is the last election in which the generation that extols socialism and never experienced the horrors of communism won’t hold sway. In four more years, the Boomers will take a back seat. Will the Millennials moderate? Will the reality of a job, a home, taxes, and government regulation force an embrace of capitalism? They show no signs of doing so. That means the nominee will be Bernie, and while he’s unlikely to be elected in 2020, his rabid protégés will be waiting in the wings.

Americans have something to fear: the future itself.

Melissa Mackenzie
Follow Their Stories:
View More
Melissa Mackenzie is Publisher of The American Spectator. Melissa commentates for the BBC and has appeared on Fox. Her work has been featured at The Guardian, PJ Media, and was a front page contributor to RedState. Melissa commutes from Houston, Texas to Alexandria, VA. She lives in Houston with her two sons, one daughter, and two diva rescue cats. You can follow Ms. Mackenzie on Twitter: @MelissaTweets.
Most Popular
1
Hither and Yon
Four Stages of Marxist Takeover: The Accuracy of Yuri Bezmenov
by Scott McKay

2
Education Gone Wild
An Old White Professor Speaks to the Class of 2020
by Abraham H. Miller

5
Commie Watch
What About the Stalin Statue?
by Paul Kengor

6
The Right Prescription
Why Has Biden Hired 600 Lawyers?
by David Catron