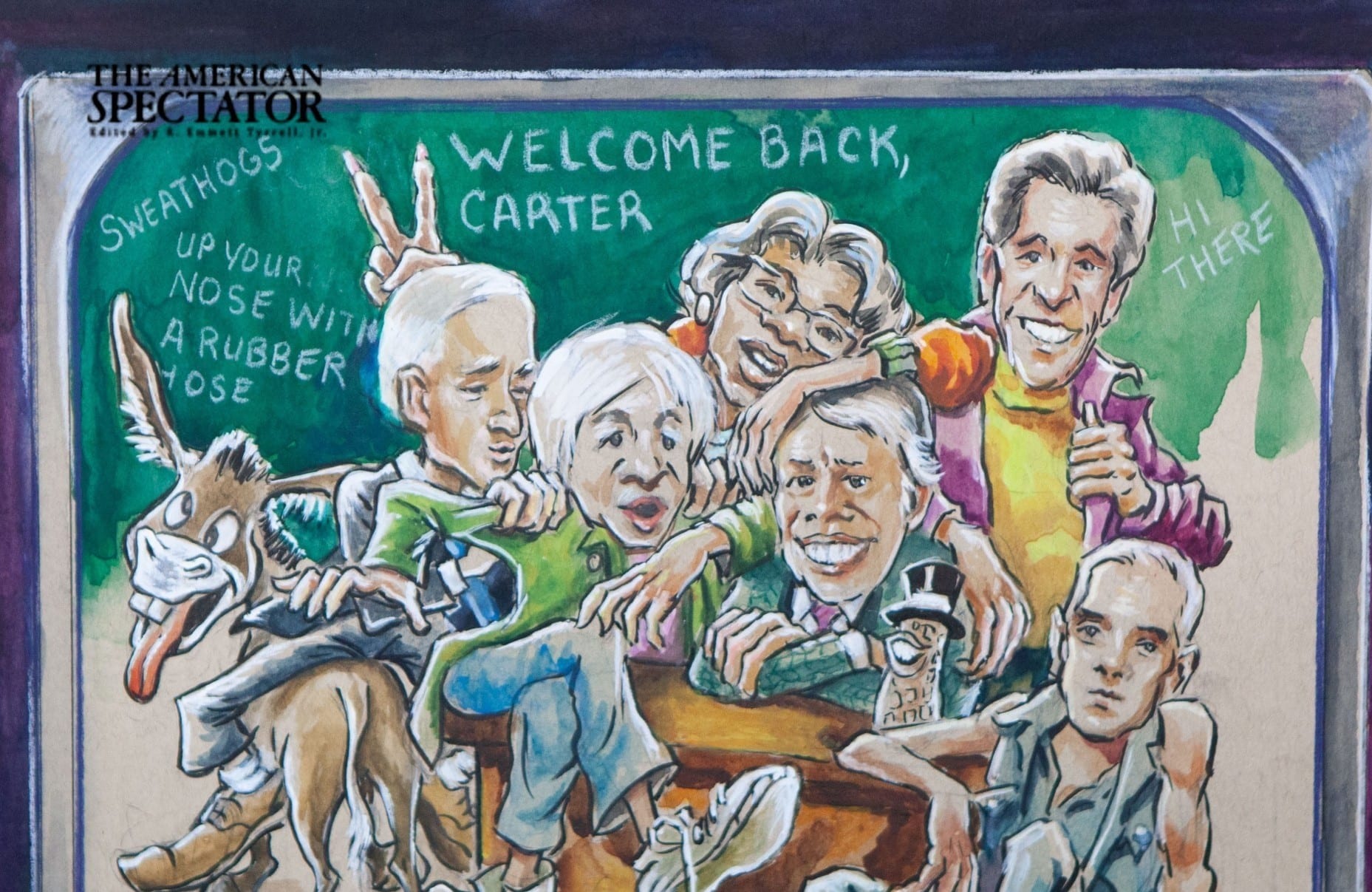 In some ways, the 1970s wasn’t the worst decade in recent American history. The music was pretty good. Between Lynyrd Skynyrd, Led Zeppelin, the Allman Brothers, Eric Clapton, and some of the other rock greats who made their mark in the 1970s, the decade’s soundtrack was actually pretty solid.

At least until disco came along.

That was a pretty good metaphor for the whole thing, actually. The 1970s was a decade spent waiting around for things to either implode or get better.

Our foreign policy certainly imploded with the Iran hostage crisis, and of course from Henry Kissinger to Jimmy Carter, the post-Vietnam stance of “détente” with the Soviet Union was essentially an exercise in waiting around to lose the Cold War.

In the 1970s, folks waited around plenty — and not just to get tickets to the Star Wars premiere. Gas lines were a thing, and not a good thing. In the 1970s, there was a lot of talk about “peak oil,” because at the time it was thought that America had mostly tapped out of its oil supply and the rest of the world would eventually follow suit.

It’s funny how things that are accepted by all the smart people tend to be so wrong.

Just ask Joe Biden, our back-to-the-1970s president, who’s been wrong about almost everything since he got himself elected to the Senate in 1972.

Biden’s first major vote was to oppose the construction of the Trans-Alaska Pipeline, which was a curious stance to take given that his opposition came amid the 1973 Arab oil embargo.

The parallels and ironies of that set of facts alone will make you peruse your vinyl collection in search of some theme music for Biden’s retrograde politics. ELO is a bit too upbeat; Engelbert Humperdinck might be just right.

That’s because Biden’s opposition to oil pipelines — and in fact his near-comic bumbling on that issue — is like a bad acid trip for the domestic energy industry.

Just as he opposed the Trans-Alaska Pipeline decades ago, he opposed Keystone XL in this one. This time Biden actually shut that pipeline down, which infuriated our Canadian allies and, together with a number of other moronic decisions, sent the price of oil and gasoline skyrocketing.

But then Biden dropped the U.S. government’s opposition to Russia’s Nord Stream pipeline, which all but gave the European energy economy over to the Russians. That happened only a couple of weeks or so after a Russian hacking club had shut down our Colonial pipeline, which supplies some 45 percent of the motor fuel in the eastern United States.

And a ransom was paid to the Russians to reopen it, which reminds one of the Iranian hostage crisis.

Biden’s administration has taken almost no time to recreate the 1970s in other ways, namely juicing inflation to levels not seen since the aftermath of the Carter administration. Inflation isn’t measured like it formerly was, with a lot of the most volatile prices no longer factoring into the Consumer Price Index (CPI). But in April the CPI still showed a whopping increase of more than 4 percent, and commodities like lumber, corn, and copper are through the roof.

Here’s one difference from the 1970s: back then the liberals who ran the country simply didn’t know what they were doing. That’s true of Biden now, but his handlers do know. They don’t believe in peak oil, but they’re trying to create it by shutting down exploration and drilling. They’re also working to create shortages of virtually everything as part of the idiotic Green New Deal agenda the Democrat Party has embraced.

The Black Panthers are also back, though they never really went away. But this time the strident racial Marxism of the Huey Newton set is ensconced in an academic discipline of sorts called critical race theory, which has the full faith and credit of the federal government pushing it from grad school to grade school. And the new gang in the streets with raised fists calls itself Black Lives Matter, though what comes out of the mouths of some of its most vocal proponents sounds almost like George Wallace.

A lot of the worst things about the 1970s are back with a vengeance.

That same year Biden voted against the Alaska pipeline, 1973, saw Israel under attack in the Yom Kippur War, a dicey affair that ended inconclusively. Israel just recently came under attack by Hamas, which launched rockets from Gaza and used children as human shields to hide behind. Both in 1973 and today, the Israelis are feeling left quite a bit alone by their supposed American allies. Then it was our dependence on Arab oil that explained our tepid support; now it’s Biden’s dependence on efforts to get in bed with the Iranians for some strange reason.

And just like back in the 1970s, there’s a “reopening” of relations with China. When Richard Nixon first broke bread with the Chinese communists, it was seen as a master stroke in international relations, sawing China off from an alliance with the Soviets. But today’s thawing of relations with the ChiComs is a little less sensible given that the world is waking up to the fact that the Chinese gave us the Wuhan virus as an opening gambit.

It was in the 1970s that we stopped recognizing Taiwan as a sovereign nation, though we continued treating it as one. Pretty soon there won’t be a Taiwan to recognize the way things are going.

We’ve gone from Billy Carter to Hunter Biden, and that’s not a good trade. Nor is going from Barbara Jordan to Sheila Jackson Lee. LeBron James has found a way to be more subversive than Kareem Abdul-Jabbar without changing his name, and watching New York go bankrupt again isn’t a fun experience. Nor is recognizing that the 1970s wants its murder rate back.

The Rocky Horror Picture Show first appeared on movie screens in 1975. There aren’t too many movie screens in use right now, but you can find Dr. Frank N. Furter, or something resembling Tim Curry’s intentionally awful character, at pretty much any local library during Drag Queen Story Hour. Other manifestations of that movie can currently be found on reality TV.

And Planned Parenthood went from cranking up the post–Roe v. Wade abortion machine in the 1970s to now ramping up delivery of sex-change hormones to kids. That reprise of Planned Parenthood’s business model expansion isn’t overly welcome, either.

But we’ve at least managed to trade bell bottoms for skinny jeans. Whether or not that’s a step up probably depends on the wearer.

The Weathermen are now Antifa, with a similar sluggishness on the part of law enforcement to do anything about their mayhem. Jim Jones’s sermons are now regurgitated on college campuses and video blogs by the Squad; everybody’s drinking the Kool-Aid, and the same leftist San Francisco politicians who patronized and propped up Jones are still around, more powerful than ever.

At least The Andromeda Strain was just a movie. It seemed more realistic than the response to COVID-19 has been.

The good news is that the 1970s begat the 1980s, as after a decade of mostly awful culture and thoroughly awful politics America was desperate for a Ronald Reagan to lead a renaissance.