At Large Abraham Accords,Antony Blinken,Israel,Israel and Palestine,Saudi Arabia 6 Key Takeaways from the Negev Summit - The American Spectator | USA News and Politics
Menu
At Large
6 Key Takeaways from the Negev Summit
There are growing defense and economic ties between the Abraham Accord signatories.
by Steve Postal
Secretary of State Antony Blinken speaks with the foreign ministers of Israel, Egypt, the United Arab Emirates, Bahrain, and Morocco at the Negev Summit in southern Israel on March 28, 2022. (U.S. Department of State) 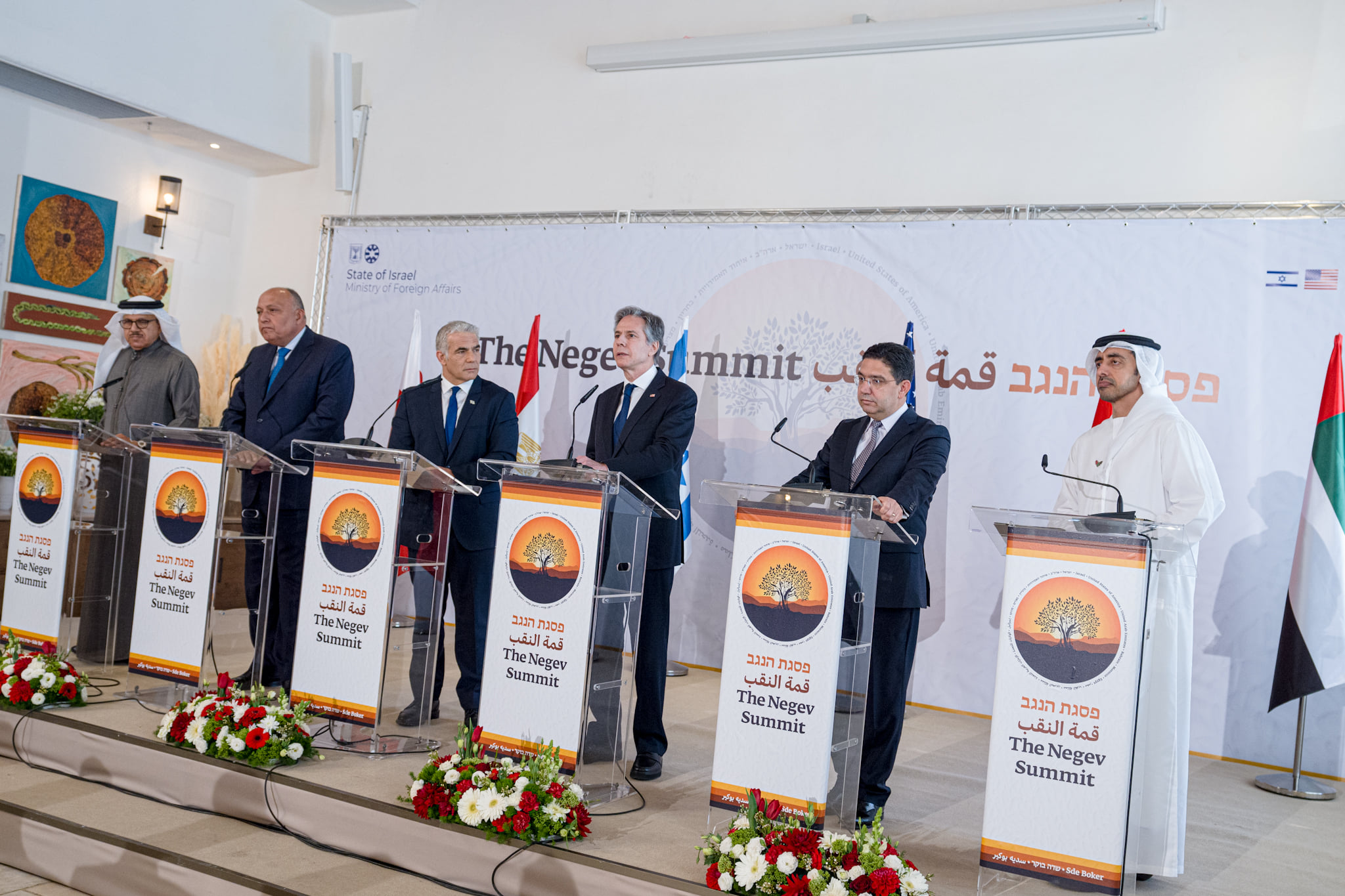 On March 28, U.S. Secretary of State Antony Blinken and the foreign ministers of Israel, Egypt, the United Arab Emirates, Bahrain, and Morocco convened in southern Israel for the Negev Summit. This is a key development in the Abraham Accords, which began under the Trump administration with the signing of the accords by Israel, the U.A.E., and Bahrain on September 15, 2020, and continued with Israel and Morocco signing a normalization agreement shortly afterward. Here are some key takeaways from the summit:

Morocco and Israel boosted ties with two memoranda of understanding and Israeli support for the Moroccan plan for Western Sahara.

In a sign of growing ties between Israel and Morocco, the two countries signed two memoranda of understanding days before the summit. The first focuses on defense and will include “a joint military commission to sign a joint action plan.” It includes joint cooperation on military training, drills, and intelligence. It follows another defense memorandum previously signed between the two countries last December. The second memorandum of understanding was in the field of aeronautics and was signed between Morocco and the Israel Aerospace Industries. It includes cooperation on 3D printing, cabin interiors, engine parts, and an engineering center. Following the summit, Israel voiced diplomatic support for Morocco’s autonomy plan for Western Sahara.

Bahrain and Israel strengthened their relationship with the “Joint Warm Peace Strategy” and naval cooperation.

According to the Bahrain News Agency, the foreign ministers of Israel and Bahrain signed a “Joint Warm Peace Strategy” with each of the country’s ambassadors present. The strategy resembles a memorandum of understanding. It focuses on cooperation between Israel and Bahrain in several sectors, including academic cooperation, digital security, food and water security, innovation, and renewable energy. Additionally, following the Negev Summit, the Israeli ambassador to Bahrain announced that Israel would appoint a military attaché to join the U.S. Navy’s Fifth Fleet in Bahrain “soon.”

Will Saudi Arabia join the Abraham Accords? Not so fast.

Only hours after the summit, Blinken called Saudi Arabia’s foreign minister. Given that the two discussed Iran’s nuclear program and other regional security issues, and that the call was made hours after the summit, it is reasonable to speculate that the two may have discussed Saudi Arabia joining the Abraham Accords. Additionally, Saudi Crown Prince Mohammed bin Salman called Israel a “potential ally” in early March. But Saudi Arabia will likely not join the accords if the Biden administration continues its gratuitous anti-Saudi policies, including its off-again, on-again supply of Patriot missiles to help the country defend itself against the Houthis, its delisting of the Houthis from the Foreign Terrorist Organization list, and its rumored pending delisting of the Iranian Revolutionary Guard Corps from that same list. (READ MORE: The Saudis Are Right to Leave Biden Out to Dry)

A regional air defense alliance is on the horizon.

A long-shot possibility is that Qatar could be a part of this alliance, as the heads of Israel and Qatar’s military reportedly met in Bahrain in early March to discuss cooperation against Iranian unmanned aerial vehicles. But Islamist Qatar would have a long way to go until it would join the Abraham Accords.

Another obvious partner, either overtly or covertly, would be Saudi Arabia, which has the most to gain against the incessant attacks it faces from Houthi missiles and drones. But again, Saudi Arabia’s participation is out if the Biden administration stands in its way.

But a de-emphasis on Iran shows Gulf states are hedging their bets.

In the summit’s joint press statement, Israel and the United States most directly linked the summit to regional defense against Iran. Israeli Foreign Minister Yair Lapid emphasized that the growing cooperation between Israel and several Arab countries “intimidates and deters our common enemies, first and foremost Iran and its proxies.” Blinken also mentioned that “we will also work together to confront common security challenges and threats, including those from Iran and its proxies.” Blinken’s statement is of course meaningless if an Iran deal is signed which will include a $100 billion windfall for the ayatollahs, permission for Russia to build Iranian nuclear reactors, and the rehabilitation of the Islamic Revolutionary Guard Corps off of the Foreign Terrorist Organization list.

Key to note is that the Arab countries present at the summit downplayed their concerns with Iran considerably. To Bahrain’s foreign minister, the Iran nuclear deal was a distant third mentioned amongst his country’s security concerns. He mentioned that building on the Abraham Accords “is made more urgent by recent developments such as the Houthi terrorist militia’s continued attacks on civilian energy infrastructure, the ongoing threat from terrorist organizations such as Hizballah and other proxy groups, and the need to resolve the Iranian nuclear file.”

The Emirati foreign minister did not mention Iran in the press statement, and the Moroccan foreign minister vaguely criticized “enemies of this positive dynamic — here in your region, also in North Africa, acting directly or through their proxies,” with the latter being a not-so-veiled reference to Algeria and the Polisario Front. According to the Times of Israel, one unnamed Arab official present stated that the U.A.E. and Bahrain do not want to take a stance that amounts to an “Israeli campaign that is too publicly aggressive” against Iran and that the Arab states are open to a revived nuclear deal with Iran in some form. If true, such a shift would reflect that the Gulf states are hedging their bets amidst a lack of confidence in the Biden administration’s ability to check Iranian power.

Arab condemnations of terror are undermined by support for Palestinian nationalism.

To their credit, not only did Israel and the U.S. categorically condemn the terrorist attack in Hadera, Israel, which occurred the day before the summit, but Bahrain, Morocco, and the U.A.E. did so as well. Interestingly, Egypt did not do so, equivocating in a roundabout way that Egypt “certainly also consider[s] and ha[s] on every occasion condemned all resort to violence, to terrorism, to incitement…”

However, the commendable words of Israel, the U.S., and three Arab states were negated by a fixation on Palestinian nationalism. The U.S., Egypt, and Morocco explicitly called for a “two-state solution,” while Bahrain mentioned “renewed efforts to resolve the Israeli-Palestinian conflict.” The messages of support against terrorism seemed jarring, given that Palestinian nationalism is anti-Israel, anti-Jewish, and jihadist to its core, and that the Palestinian leadership has consistently opposed Arab normalization of ties with Israel.

An honorable mention of key takeaways from the summit was the approximately four-minute-long statement of the U.A.E.’s foreign minister in which he delivered an eloquent, heartfelt speech of appreciation of and cooperation with Israel.

Monday’s Negev Summit demonstrated growing defense and economic ties between the Abraham Accord signatories. Thanks to significant legwork done by the Trump administration, the Biden administration now has significant power to negotiate or otherwise support a sustainable mechanism to check Iran’s nuclear, ballistic, and terroristic ambitions in the region. But much of this progress will be eroded if a weak deal is negotiated with Iran on its nuclear ambitions.