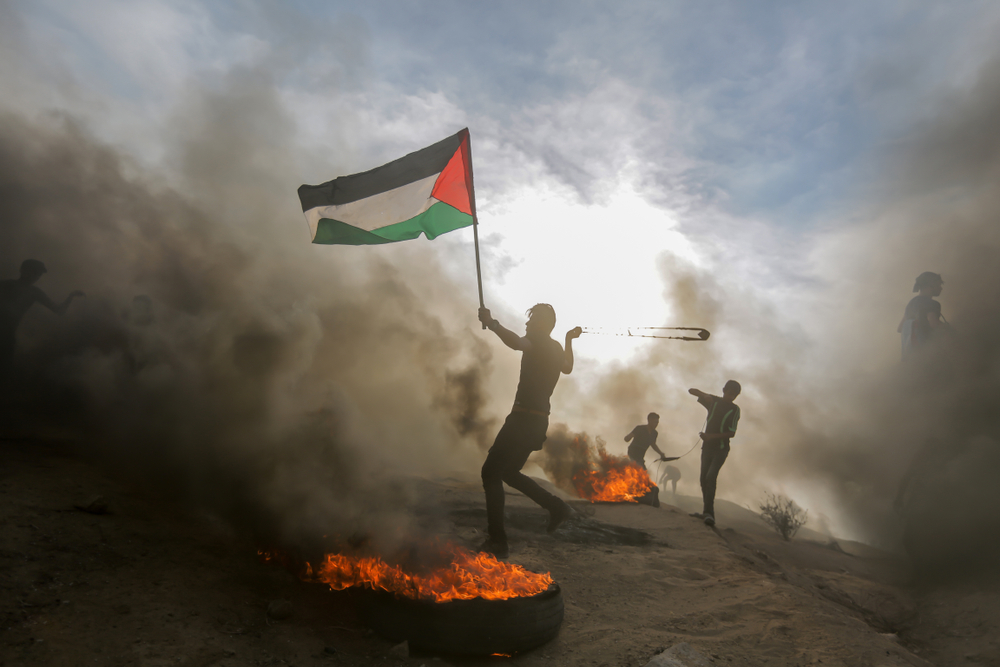 Israeli Defense Minister Benny Gantz recently hosted Palestinian Authority (PA) President Mahmoud Abbas at his home, marking the first such meeting of Israeli and Palestinian senior officials inside Israel since 2010. Given that Gantz is open to meeting Abbas again, and his gifting of several “confidence-building measures” to Abbas, one might think that Israel is contemplating new diplomatic talks with the Palestinians.

But what is the point?

By looking at Palestinian media compiled by watchdog Palestinian Media Watch since November alone, one can easily see that the PA is far from a good faith peace partner. In fact, the PA (and the PLO and Fatah) continue to endorse terrorism, spread various libels against Israel, reject Arab normalization with Israel, and question the legitimacy of Israel itself. While Israel is inching towards diplomacy, the PA marches on with its rejectionism.

The PA is still supporting terrorism. In a recent phone call between a newly released terrorist and Abbas, the terrorist tells Abbas three times that he and other terrorists are “your loyal soldiers.” Abbas responds by saying to the terrorist, “May Allah bless you,” and that what the terrorist did was “not a tiny part” but a “great and important part.” The Hebron branch of Fatah celebrated Fatah’s 57th anniversary with a post on its Facebook page stating that “We are the ones who give birth to a Martyr every day.”

On PA TV, a girl recited a poem including the verses “Our rifles are on our shoulders … I swear … by the Jihad fighters and prisoners … We will trample the necks of the Zionists and make a path out of them.” A song broadcast on PA TV included the lyrics “We replaced bracelets with weapons / … This is the day that Jihad is needed / Pull the trigger.” PA TV also interviewed the a terrorist’s son, who, speaking on behalf of himself and his siblings, stated that “We hold the [our father’s] paternal value high because we are the sons of a hero and fighter… We grew up living on dad’s good name and people treated us accordingly.”

The PA also continues to propagate numerous libels against Israel. The official PA daily Al-Hayat Al-Jadida claimed that Israel “exported” COVID-19 to the PA and used it “as a new weapon” to tank the PA’s economy. Official PA TV programming included Palestinian girls singing songs calling Jews “impure” and “the world’s dogs” and accusing Jews of “defiling” Jerusalem. On World Children’s Day, Al-Hayat Al-Jadida included a cartoon that accused Israel of targeting Palestinian children. Journalists in both Al-Hayat Al-Jadida and PA TV stated that Israel commits atrocities as great or greater than the Nazis.

The PA continues to reject normalization of relations with Israel. The PLO Supreme Council for Youth and Sports recently called soccer matches between Israel and Morocco and Israel and the UAE “an insult to our people’s struggle and the sacrifices it has made” and “a serious and deep stab in the heart of every free Arab.” The PA embassy in Algiers commended Algerian judoka Fethi Nourine for refusing to compete with an Israeli challenger at the 2020 Tokyo Olympics with an event that was a “special expression of appreciation for … supporting the Palestinian people’s cause.” (READ MORE from Steve Postal: Biden Poised to Create Crisis in US-Israel Relations)

The rejection of normalization extends to commerce as well. The PA Ministry of Education recently published an altered photograph of a Palestinian boy drinking an Israeli drink, with blood coming out of his head and the caption “Beware! Lethal Israeli goods.”

And lastly, the PA continues to question the legitimacy of Israel itself. Over 100 years after the fact, the PA repeatedly maligns the 1917 Balfour Declaration, the document in which Britain supported the concept of a Jewish home in the British Mandate of Palestine. One recent Palestinian publication called the Declaration a “declaration of war against Palestine” and “based on a narrative packed with falsifications, empty claims, and racist descriptions!” The PA also taught fourth grade Palestinian girls “that Palestine is Arab from its [Jordan] River to its [Mediterranean] Sea, its capital is Jerusalem, and that it will be liberated sooner or later,” leaving of course no room for Israel to exist. Similarly, the PA Ministry of Education teaches children that “Palestine — the entire land is ours, from the [Mediterranean] Sea to the [Jordan] River.”

So while the unity government in Israel could be testing the waters on a new diplomatic initiative to the PA, any such initiatives are doomed to fail until the PA stops inciting against Israel.