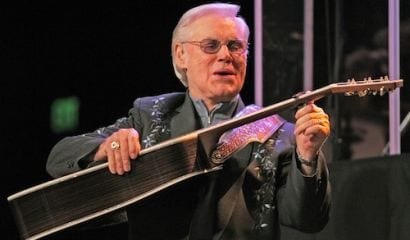 By now, word of George Jones’ death Friday has gotten around and caused much sadness among fans of traditional country music. And perhaps more than a little amazement that Jones, who pounded his liver and other giblets for decades with oceans of booze and various controlled substances, managed to live 81 years.

During the post-war 20th century there were dozens of fine male practitioners of the traditional country sound (and some talented ladies as well, of course). But of the men there were only two giants – Hank Williams Sr., and George Jones. The two were far apart in time. Jones’ first hit, “Why Baby Why,” didn’t come until two years after Williams’ early death at 29 on New Years’ Day 1953. Williams began his meteoric but short career when country was still called hillbilly. Jones was the best in the business during that magical period of the late sixties through the eighties when country was at its brightest and most popular. (Briefly during early Reagan years, country surpassed rock as the most popular radio format. I was working then in Washington, which had two prosperous and popular country stations, which I listened to in lieu of NPR.)

Jones’ large and loyal fan base was fetched in by such heart-rending songs as “She Thinks I Still Care,” “The Grand Tour,” “Walk Through This World With Me,” “Still Doin’ Time,” and of course, the granddaddy of all country weepers, 1980’s “He Stopped Loving Her Today.” This last is possibly the most maudlin song ever recorded. But it won all manner of awards and is on most lists of the greatest country songs ever. George Jones made this song credible with his rich and supple baritone voice and his sensitivity to country music’s major themes, lost love and yearning. The sheer conviction of Jones’ evocative phrasing made even the least likely lyrics convincing. He didn’t just sing a song, he inhabited it, lived it, sold it, made you believe the story and care about it. Between George Jones and the receptive country heart, suspension of disbelief was never a problem.

Jones sang some upbeat songs such as, “I Always Get Lucky With You,” and even some bouncy novelty numbers like “White Lightnin’.” But his reputation is based on slow ballads of heartache, loss, and loneliness. A major sub-theme of many of his songs is the seedy bar scene and a losing battle with the bottle, subjects Jones knew a good deal about.

It was booze and binging that destroyed Jones’ six-year marriage (1969-75) with country queen Tammy Wynette. Though the two country stars were able to record some fine duets both after their divorce and during a marriage that the word dysfunctional doesn’t begin to describe. Hear the two on “We’re Gonna Hold On,” “Golden Ring,” and “Near You.” For sheer cuteness, tee-up “We’re Just a Pair of Old Sneakers.” Wynette also had an expressive voice and delivery, making their musical collaborations, if not their collaborations at home, some of the best in the history of country music.

At the end of the marriage, Tammy is reported to have told George that he could have her or he could have the bottle, but he couldn’t have both. Her signature song may have been “Stand by Your Man,” but by 1975 she’d had enough of a booze-besotted George Jones. George chose the bottle, proving once again that there’s just no accounting for taste. (As a son of the blue-collar South, I find the notion that any man would let Tammy Wynette go beyond understanding. It’s non-compos something-or-other.)

Success and excess came at the same time for Jones. As his popularity grew, so did his erratic and destructive behavior. (His many peccadilloes are described, with more honesty than is usual for the form, in Jones’ 1996 memoir, I Lived to Tell About It.) With the help of prodigious amounts of booze, pills, and the odd frolic with cocaine, Jones managed to run through the millions his music brought him, eventually landing in bankruptcy court. Driving while tanked, barroom brawling, and such bizarre instances as shooting a gun at a friend’s car, made Jones an occasional visitor to the police blotter. His drinking also led to several hospitalizations. (Perhaps having to do with the way he lived, in 1994 George took the bypass. Triple bypass.)

Thanks to Jones’ insistence on living country songs instead of just singing them, he became as notorious as he was loved. One of his sobriquets is “the Possum,” because his sharp nose and close-set eyes made him resemble the animal. The other nickname he earned was “No-show Jones” because of the number of concerts he either didn’t show up for at all or couldn’t perform because he was the worse for drink (a problem not unheard of in Hank Senior’s career).

Perhaps Jones’ biggest gift of grace came when he married Nancy Sepulvida in 1983, his fourth of four wives, who stayed with him for the duration and, Jones says, was mainly responsible for finally getting both his professional and personal lives between the ditches. He left booze and cocaine behind and concentrated on his career, which, thanks to changes in musical taste and changes in the makeup of the country audience, was about to level off. During the nineties and in the new century, Jones went from hot recording star, to elder country music statesmen, and finally, to some, a Mustache Pete of interest only to grandparents and music historians. Jones even joked about being ushered toward the country music exit in a song, “I Don’t Need Your Rockin’ Chair.”

“They don’t know who I am in downtown Nashville,” Jones lamented in later years. He became just another victim of the Sun Belt South and the unending and merciless pursuit of the youth audience. Save for some albums of country and gospel tunes with such as Merle Haggard and Toby Keith, Jones recording life wound down. His voice was rarely heard on country stations, whose air time was now devoted largely to such characterless performers as played on smoky stages, without a steel guitar in sight, wearing long black coats, jumping around a good bit, and sounding like rockers (I’ve omitted names to protect the guilty).

The end of Jones’ reign, while sad for traditionalists, was probably inevitable. Both country listeners and the newer country performers are a generation removed from the hardscrabble life of Depression-era East Texas that Jones came up in. Jones and his contemporaries sang white soul music – songs that described and celebrated lives where nothing came easy. Jones refined his art as a youngster playing Pentecostal revival services and Beaumont, Texas honky-tonks (a Saturday night, Sunday morning dichotomy familiar to many traditional country singers, but a mystery to the new crowd). For contemporary country listeners and performers, things have been a good deal easier, more flush, but less interesting. Current country performers are more likely to have learned to pick in college than in some dive smelling of sweat, stale beer, and fist fights.

A decade or more ago I quit listening to country stations, which had been a habit of a lifetime. It wasn’t just because of the interminable commercials, though these can be mind-numbing. Nor was it the repellant, chattering magpie DJs. (Where do they find these people?) It was mainly the absence of Jones and his contemporaries in the play list. After about the one-hundredth time I asked myself, “What on earth was country about any of the last five songs I just heard,” country stations and I adjourned sine die.

Whatever made country country seems to be a bit lost for the moment (though, prosecution stipulates, there are a small number of singers who still carry the flame – George Strait and Alan Jackson come to mind). It may or may not be found again. In either case there will never be another George Jones. There wasn’t an ounce of crossover in him. He wasn’t cool. He wasn’t modern. His greatest songs wouldn’t even be recorded today. But country fans of a certain age, and of a certain temperament, know there’s nothing like a sad country song. And no one could sing them like George Jones. He wasn’t just the best country singer of his day. He was the perfect country singer.

A long-time friend and traditional country aficionado nailed it, as we lamented Jones’ passing over the weekend, when she said, “I’d rather hear George drunk on his a** with no backup than (insert the name here of any of a number of bland contemporary ‘country’ singers) sober with the philharmonic orchestra.” Just so.

So George, many thanks for the pleasure your songs have brought me and millions of others over the years. Behave yourself. And peace be with you and your country soul. Lord knows you enjoyed little enough of it when you were here.