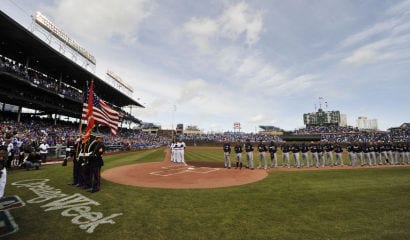 Major League sports team owners we will always have with us. They are different from the rest of us.

Wake a normal person at three in the morning with a loud noise and he’ll yell, “Holy ****! What was that!?” Wake a major league team owner (any sport) at the same time with the same noise and he’ll explain, “We need a new ball-yard. And if you don’t buy us one with public money we’ll move the team to Keokuk.”

When The Mob does this it’s called extortion. When major league team owners do it, the local chamber of commerce and pliable politicians call it economic development. In either case it’s a bad deal for the marks. If major league franchises were the economic drivers their owners claim them to be, and that gullible or self-interested parties claim to believe them to be, the richest neighborhood in America would be the South Bronx, where the New York Yankees play. Have you been there lately?

Chicago Cubs owner Tom Ricketts is running a variation of this hustle just now, and creating some unintentional comedy along the way. At first he went for taxpayer gold like other team owners. But flat broke Illinois and Chicago have told Ricketts that there’s no public money for the half billion dollars in “improvements” he says he wants to make to Wrigley Field, a baseball shrine most savvy baseball fans would be shocked to learn needs improving.

Of course the improvements Ricketts wants, including lots more signage, are things he believes would increase his revenue rather than anything that would improve the game-watching experience in Wrigley. Au the contraire, the item atop Rickett’s wish list, a 6,000-square-foot jumbotron that would loom over Wrigley’s left field bleachers, would make catching a game at the friendly confines a lot less friendly, but a good deal noisier, less pleasant, even sillier.

In addition to scores and stats, jumbotrons in ball yards across the nation disfigure baseball with near constant commercial pitches at 100+ decibels, brain-dead music, and even more brain-dead screen games that seem to be designed to keep the congregation’s minds off of baseball (perhaps not such a bad strategy with the Cubs, who this year are once again, let’s say it together, rebuilding). Who really cares which cup the pea is under? Who really has a favorite in the wiener derby? And who would stay home instead of going to the park if there were no ear-splitting rendition of Y-M-C-A?

Wrigley Field neighbors, understandably, don’t want the Mumbo-Jumbo and have threatened to sue if Ricketts proceeds with this very bad idea. It’s not clear the City of Chicago, which in 2004 declared Wrigley a Chicago Landmark, with that classification’s attendant restrictions and tax breaks, will grant approval for all of the commercial upgrades Ricketts wants.

Not all the neighbors are baseball purists, and not all their objections are based on aesthetics. Owners of buildings around Wrigley’s outfield fence have long sold rooftop seats for Cubs games and have a commercial arrangement with the team. They fear the Mumbo-Jumbo will restrict their view. (Other near neighbors who are not now worried about the increased level of noise the Mumbo-Jumbo would bring should be. Noise levels in most jumboized ball yards rival that of rock concerts.)

The unintended comedy came last week when an obviously frustrated Ricketts, before a Chicago business group, threatened to move the team out of Wrigley to a new yard in a suburban site if he can’t have his way. This performance puts him in a good position to plead temporary insanity. (And, considering the affection Cubs fans have for Wrigley, might put him in need of a food-taster.) Not just because the team obviously doesn’t have the money to build a new ball yard, but also because Ricketts lost track for the moment of the fact that even people who don’t know much about baseball know Wrigley Field is a destination while the Chicago Cubs are not. Wrigley is all the Cubs have. It’s a priceless asset as it stands.

The Cubs, who’ve not won a world championship since 1908 (when Mark Twain and Leo Tolstoy were still alive and Ronald Reagan had not been born yet) would not be the lovable losers, playing before packed houses year after year regardless of their record, if the house were not Wrigley Field, which along with Boston’s Fenway Park is one of the consensus two finest ballparks in the land. Finest because retro Wrigley is designed to watch a baseball game in, not to exploit every possible advertising angle and to extract every possible dime from patrons.

Would the Waukegan Wombats pack ’em in like the Wrigley-based Cubs? Would Cubs loyalists flock to an antiseptic blister in the middle of a suburban parking lot large enough to be seen with the naked eye from the closer planets? Don’t bet your $9 hot dog on it.

Ricketts seems to understand this and backed away a bit from his empty threat when it dawned on him how silly he looked. What he doesn’t seem to grasp yet is that all of the revenue enhancers he seeks could, likely would, backfire on him if all they do is make Wrigley like so many other ball yards. People go to Wrigley for its aesthetics, its history, its atmosphere, its uniqueness. And not just Chicago people. A significant fraction of Wrigley ticket buyers during June, July, and August are tourists on pilgrimage to a baseball holy place they’ve heard about all their lives. If Wrigley comes to look like the ball yard in Anywhere, USA, would they bother? Would locals continue to pack the house if they couldn’t take a step or enjoy a moment without being hit by a commercial pitch? (HBP if you’re keeping score.)

“All we really need is to be able to run our business like a business and not a museum,” Ricketts told the business group Wednesday. Earth calling Tom: Wrigley field is a ballpark and a museum. The sooner you learn this, the better your chances of both contentment and profit.

It can’t be easy these days making a buck off a major league team when the services of utility infielders and back-up catchers cost millions per year. But stratospheric ticket prices, gaudy TV contracts, and a beer and a hotdog costing as much as a meal in a middling restaurant take some of the sting out of this (for owners, not fans). And I’ve long suspected that major league team accounting may be kin to Hollywood accounting that shows “Gone with the Wind” yet to make a profit.

Whatever the CPAs have to say, Ricketts is, like it or not, temporary steward of a national treasure that is also a business. One that baseball fans across the nation pray he will resist dismembering. And he needn’t do so in order to win baseball games. His lament that he needs more revenue in order to put a winning team on the field doesn’t hold up when one looks at small market teams that have become winners with way less revenue than the mega-market Cubs have enjoyed over the years (see the Tampa Bay Rays, Oakland A’s, and Minnesota Twins).

So Tom, before you consider replacing Wrigley’s ivy with ads whooping up local car dealers, thereby driving away both baseball fans and car buyers, consider other options. Instead of squandering millions and therefore needing more millions, why not make smarter baseball decisions? Learn to grow your own on the farm instead of relying on signing pricey free agents. (Some wine gets better with age – most baseball players just cost more as they get older.) Revisit your decision to hire checkbook GM Theo Epstein. Consider bringing on a guy who knows what bang for the buck means.

You can build a winner without destroying Wrigley’s considerable charm. Defy the current execrable trend. Allow Wrigley to remain a baseball park. Don’t try to turn it into a huge, open-air video-game parlor. Take pride in being the UNbotron park. People who would rather play with their smart phones than watch the game can do so now. Why mess it up for the rest of us by hectoring all in attendance with the noisy, unblinking eye and mega-mouth that never shuts up?

Focus, Tom. This is serious. We’re talking about Wrigley Field here, not some trifle. Do the right thing. You’ve got it in you. And you’ll feel so much better if you do. And then you can let that food-taster go.