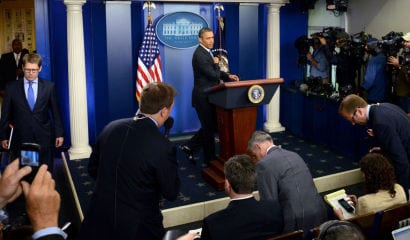 If ponies rode men and grass ate cows,
And cats were chased into holes by the mouse . . .
If summer were spring and the other way round,
Then all the world would be upside down.

Once in a long while, an event evokes one of my favorite historical images: the British Army band, at Lord Cornwallis’ surrender at Yorktown which sealed the Americans’ revolutionary victory, playing “The World Turned Upside Down.”

In this case, the event is the dramatic change over the past two weeks in the “mainstream” media’s coverage of President Obama.

From reporters to opinion writers, from newspapers to television, after a mere four and a half years of economic fecklessness, foreign policy failure, unseemly narcissism, and a Nobel Prize for deeds to be named later, prominent liberal-leaning pundits and organizations may have finally realized that reality, if not journalistic ethics, demands a more clear-eyed look at the president they have been so deeply invested in.

Or maybe they’ve just noticed that their fawning and sycophancy has meant declining circulation and viewership.

But whatever the reason, the dominant establishment mass media’s turn is as remarkable as it is welcome.

The first major crack in the dike may have come from New York Times opinion columnist Maureen Dowd in an April 20 piece entitled “No Bully in the Pulpit” in which she bemoans President Obama’s inability to pass restrictions on gun rights. It is not the liberal writer’s anger over the outcome that is surprising; it is that instead of the usual “it’s all the Republicans’ fault” meme, she lays the blame directly at the feet of the previously Teflon-coated president:

It’s unbelievable that with 90 percent of Americans on his side, he could get only 54 votes in the Senate. It was a glaring example of his weakness in using leverage to get what he wants. No one on Capitol Hill is scared of him. Even House Republicans who had no intention of voting for the gun bill marveled privately that the president could not muster 60 votes in a Senate that his party controls.”

Dowd’s criticism of Obama was, by N.Y. Times standards, withering:

Apparently, Maureen Dowd gave other reporters and columnists a “permission structure” to tell their cloistered liberal readers what much of the rest of the country has long understood. Over the ensuing two weeks, they’ve used that permission, raining down a deluge of criticism of Obama.

On April 30, Dana Milbank — a liberal columnist for the Washington Post who recently asked in writing “Is there nobody who can tell Ted Cruz to shut up?” (Dana, I suggest you walk over there and try it yourself) — called Barack Obama “A presidential bystander.”

This was in response to Obama’s press conference that morning in which “The president was out of sorts from the start.…He didn’t attempt to set the tone for the event.…And he often found himself remarking on the difficulty of his job.”

Milbank closed his note with this advice for Obama: “[L]ively leadership is the way to resuscitate a moribund presidency.”

Also in response to Obama’s disastrous press conference performance, another liberal columnist, Frida Ghitis, says that the president is “failing on moral leadership.”

Ms. Ghitis argues that “The president is smart and eloquent. But leadership, especially for someone who has achieved that level of power, requires three elements: It must communicate a clear vision and a commitment to its realization; it must mobilize and inspire others into action; and it must produce results.” On a wide range of issues, she seems to believe Obama is accomplishing none of those things — and, regardless of political viewpoint, who could disagree?

Her conclusion echoes those of Milbank and Dowd: “Of course, the problems he has to deal with are difficult and often offer choices between bad and worse. But the time is right for a new display of conviction, of effectiveness, of leadership.”

The highlight (or for Obama, the lowlight) of the April 30 press conference was a question by ABC News’ Jonathan Karl: After laying out a list of Obama’s political failures including gun control and the sequester, Karl asked “So my question to you is do you still have the juice to get the rest of your agenda through this Congress?” No, that wasn’t Fox News’ Ed Henry, but the White House reporter for one of the three old-line broadcast networks who dared to ask such a question.

In typical Barack Obama style, the response was a 9-minute passionless sermon best described by Tom Lehrer’s description of Gilbert and Sullivan’s comic operas: “Full of words…and signifying nothing.”

No doubt asking hard questions of a man so richly deserving of them was a liberating renewal for Mr. Karl and maybe part of a new permission structure for his Obama-adoring colleagues: “Oh, now I remember why I went to journalism school.” But perhaps I am too optimistic.

On April 25, N.Y. Times reporter Sharon LaFraniere published a remarkable piece of investigative journalism in criticism of a fraud-infested race-based scheme used by Democrats to buy elections. When I mentioned to Ms. LaFraniere how impressed I was to see this story in the Grey Lady, she responded “the NYT really wants to uncover the truth. There are no sacred cows.” Frankly, when it comes to Times management, I don’t believe it…though I believe LaFraniere does, and she can rightly point to the fact that she was allowed to publish a 5,300 word, front-page story which must have caused many Democrats, including Times editors and President Obama, to cringe.

A week later, a group of four Times reporters published another front page article — a dagger in the heart of what little foreign policy credibility President Obama has left, even among the left. In that story, readers learn that Obama’s infamous “red line” regarding the use of chemical weapons by the Assad regime in Syria was an unscripted ad-lib which came “to the surprise of some of his advisers” and which “defined his policy in a way some advisers wish they could take back.”

By putting his foot in his mouth, by implicitly committing to some substantive American response to a particular event that may now have happened, Obama may have cornered himself into taking an action that he doesn’t want to take, namely “providing lethal assistance to the Syrian rebels” — which is, despite Congressional chicken hawks’ pleas to go down that very road, a truly terrible idea.

In short, the article suggests that by not understanding the significance of his words, the president has narrowed his options, possibly forced his own hand, and impacted the already jaundiced eye that America’s allies and enemies alike turn toward any American foreign policy statements of this administration. Obama has through his egocentrism and naïveté added instability to an already dangerously unstable world. May I remind you: this was the New York Times.

The article corrected several Obama claims on issues like immigration and an emerging Mexican middle class, noted that “many among the several hundred people in attendance said he seemed too upbeat about their country” and quoted audience members with reactions like “Obama is fantastic, but I believe that today he was talking about another country, not ours.”

Particularly when it comes to foreign affairs, Barack Obama is no longer the adoringly-fêted citizen-of-the-world who, on July 24, 2008 spoke in Berlin to 200,000 adoring, mindless fans, in a speech that German magazine Der Spiegel called “People of the World, Look at Me.”

To be sure, not all of the usual suspects in the liberal media have changed their tunes. Former CBS News anchor Dan Rather, still bitter over losing his job in an attempt to smear George W. Bush with a forged document, says that Obama’s Republican opponents “want to cut his heart out and throw his liver to the dogs.” (One wonders what they want to do with the heart.)

But when reporters and columnists from the N.Y. Times to the Washington Post, L.A. Times, CNN, ABC News, and others have suddenly come out of their Obama-critique group-laryngitis and are telling the world that the president is a reckless, feckless, spineless non-leader, the political world has indeed turned upside down.