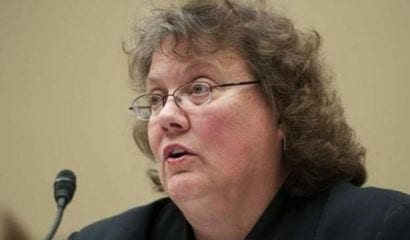 Yesterday I asked in this space, among other questions about the IRS scandal, this:

What was the subject of the Obama-Kelley March 31, 2010 meeting?

I received the following response to my question from the National Treasury Employees Union (NTEU) — the union for IRS employees headed by ex-14 year agent Colleen Kelley. The response came from union spokesperson Dina Long. It reads, in its entirety, this:

On March 31, 2010, NTEU President Colleen M. Kelley attended the White House Forum on Workplace Flexibility at the Old Executive Office Building. The forum was attended by approximately 200 attendees including business leaders, workers, policy experts and labor representatives discussing telework and worklife balance issues. Attendees were broken into five groups to discuss workplace issues. The president made opening remarks. President Kelley did not have any direct contact with the president or the first lady. President Kelley has never discussed the tea party with the president.

Below is a description of the March 2010 forum from the White House web site:

On March 31, 2010, President Barack Obama, First Lady Michelle Obama and the White House Council on Women and Girls hosted the White House Forum on Workplace Flexibility. The Forum brought together small business owners, corporate leaders, workers, policy experts, and labor leaders to explore the importance of creating workplace practices that allow America’s working men and women to meet the demands of their jobs without sacrificing the needs of their families. Building on the momentum coming out of that forum, the Administration is hosting follow-up forums around the country and encourages others to convene events in their communities to engage in dialogue and take action on this important issue.”

Read again. Let’s see how the Washington game is played.

Over here, in a story by the Daily Caller’s Caroline May, the NTEU responded to Ms. May with the exact same statement that was sent to me.

With one difference. This interesting sentence:

President Kelley has never discussed the tea party with the president.

The folks over at the Daily Caller, Tucker Carlson’s site, are no dummies. If that sentence had been included in the otherwise identical response they received from the NTEU, they would have reported it.

So why was that one particular sentence tacked on to the otherwise identical statement from the NTEU? In a response to me?

Because in fact it is an answer — a disturbingly partial answer — to but one question of eight questions that I asked of Ms. Kelley. Let me share with you the exact email I sent to the NTEU for Colleen Kelley:

This is Jeff Lord from the American Spectator.

I am the author of today’s article Obama and the IRS: The Smoking Gun? https://spectator.org/archives/2013/05/20/obama-and-the-irs-the-smoking which mentions NTEU president Colleen Kelley.

US News reports today the March 31, 2010 meeting mentioned in the article was a ” ‘Workplace Flexibility Forum,’ a March 2010 event that was about the state of flexible work arrangements.” I realize there are a number of questions here, but under the circumstances of this IRS controversy I want to make sure that Ms. Kelley has the opportunity to answer. I will be happy to publish her answers verbatim in The American Spectator.

Thanks,
Jeff Lord
The American Spectator

• Did the President himself ever, at any time, discuss the Tea Party with Ms. Kelley?

• Did the President ever communicate his thoughts on the Tea Party to Kelley – in any fashion other than a face-to-face conversation such as e-mail, text or by phone?

• Was the Tea Party or any other group opposing the President’s agenda discussed at the March 31st meeting, or before or after that meeting?

• Will Ms. Kelley ask the IRS to release all e-mail, text or phone records between Kelley or any other leader of the NTEU with IRS employees? With the Oversight Board? IRS employees are federal employees paid with taxpayer dollars.

• Has Ms. Kelley ever been given access to IRS records of Tea Party cases? Has she ever discussed the Tea Party or any conservative organization with IRS employees at any level?

• What did Ms. Kelley discuss with the President or any White House or government official at the December 3, 2009 White House Christmas Party that she attended?

• What role did Executive Order 13522 play in the IRS investigations of the Tea Party and all these other conservative groups?

That would be eight questions for “President Kelley,” as she was called in the NTEU response.

The very first question was:

Did the President himself ever, at any time, discuss the Tea Party with Ms. Kelley?

To which the NTEU responded by simply tacking on the following single sentence to their boilerplate reply to the media:

President Kelley has never discussed the tea party with the president.

But the rest of it? The answers to questions two through eight?

Silence from the official NTEU spokesperson Dina Long. Silence from Colleen Kelley herself.

Note as well that when contacted by the Washington Post last week, the NTEU’s Kelley was, in the words of the Post headline, “mum.” Wrote the Post:

So far, the National Treasury Employees Union, which generally is not shy with public comment, has next to nothing to say about that or anything else.

NTEU is working to get the facts but does not have any specifics at this time. Moreover, IRS employees are not permitted to discuss taxpayer cases. We cannot comment further at this time,” NTEU President Colleen M. Kelley said via e-mail.

A call to the NTEU office in Cincinnati resulted in a similar response: “We’ve been directed by national office. We have no comment.”

A powerful labor union — the union that represents IRS employees — is displaying a pattern of refusing to answer questions. Other than the solitary statement to The American Spectator that “President Kelley has never discussed the tea party with the president.”

Beyond a generic, boilerplate answer to media inquiries, there is silence.

No answers about releasing union e-mails or phone records to or from the White House, the IRS or the IRS Oversight Board (on which board sits a former NTEU president) and no answers on all the rest.

But over here at the Washington Post, we have, buried in a story about the Cincinnati office of the IRS, this key phrase:

“Everything comes from the top. We don’t have any authority to make those decisions without someone signing off on them. There has to be a directive.”

“Everything comes from the top.”

The top is where Colleen Kelley, the head of all those unionized IRS workers in Cincinnati, operates.

The top is the White House, the IRS offices in Washington, D.C., and the IRS Oversight Board.

The top is what makes it possible for the IRS union to have the run of the IRS, to get an Executive Order (# 13522) from the President to “allow employee and unions to have pre-decisional involvement in all workplace matters….”

The top is where Colleen Kelley goes to a White House Christmas party as the guest of President and Mrs. Obama — six days before that Executive Order 13522 is issued.

The top is where Colleen Kelley can be the head of the IRS union that gets its dues, its very survival money, from employees being paid by taxpayer dollars — and not have to answer questions about the details of her “collaboration” with the White House, the Obama-run IRS and the IRS Oversight Board.

And being at the top is what gives Ms. Kelley the belief that she can head an IRS public employees union — and do the old Nixon stonewall.

She isn’t the only one at the top busy stonewalling right now.

And as with Watergate, the place to get to the bottom of the top is Congress.

Where a new version of an old question should be asked:

What did the IRS union president know — and when did she know it?