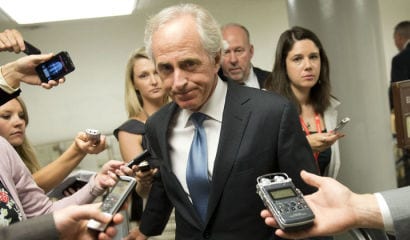 As should be clear to the honest observer paying the slightest attention, any thousand-page or more federal legislation with the word “comprehensive” in its title will make the country worse. Apparently Senator Jeff and the other seven flakes pushing the “Let’s Annex Mexico and Bankrupt America Bill of 2013” hope American voters haven’t noticed this.

Even by the river-boat standards of Washington, the conversation about immigration “reform” is impressively fraudulent. Almost everyone within the Beltway bloviating on this issue has an agenda. They’re looking out for the interests of their campaign contributors, looking to cover their very own personal butts, or pursuing what they think are the interests of their political party. What is conspicuously absent in this political shell game is any concern for the national interest, which we’re in danger of badly damaging.

As is so often the case in matters of moment, the Republican establishment has managed to be both stupid and cowardly in this debate (if you can even call it a debate — it’s more of a bidding war on how dumb we can be on this). Stupid in that these worthies have bought into the notion, no more than an unexamined assumption, that people with Spanish last names vote for Democrats because Republicans are insufficiently eager to rid the country of its borders. Cowardly because the current hair-ball of an immigration bill, if adopted, would lead to very bad results for the nation, and silk-stocking Republicans are afraid to speak the obvious for fear that voters with Spanish last names will be offended.

Save for Jeff Sessions, Ted Cruz, and a very small cohort of Republican conservatives, the silence on the GOP side is deafening. The Republican establishment, yet again, finds itself crosswise with a majority of Republicans. Polls consistently show a majority of Americans want our southern border secured before any further steps are taken toward immigration “reform,” which, judging from the current conversation, mainly means making instant Americans out of millions of citizens of other countries. Just how many times can the Republican establishment suggest that its base is a bunch of nativist yahoos and get away with it?

How is this conversation fraudulent? Let us count the ways:

The biggest Big Lie is that this mega-bill would slow the influx of citizens of other countries illegally entering America to stay. It would not. It would lead to more, not less border-hopping. “Let’s Annex” would start by making permanent American residents of at least 11 million citizens of other countries — more Mexicans than anyone else — who’ve entered America illegally and are indisposed to leave. As staying in America is all that most of these folks want, this is a hell of a reward for breaking American law and making a laughing stock of American sovereignty.

The message this amnesty would send south of the border could not be clearer. Sneak into El Norte now and you can stay. Jubilee! If this message won’t create millions of new “Americans,” a chicken won’t lay an egg. And before someone brings it up, it’s best to disregard all those stories about how illegal immigration from Mexico has slowed. This is temporary. When/if America overcomes the economy-smothering policies of the Obama administration and returns to prosperity, the flow will pick up again, even in the absence of this very bad legislation. And make no mistake, the wave of new immigrants this bad bill would attract to a broke America would cost way more in government services than they would pay in taxes.

A great deal of effort and rhetoric was expended in the U.S. Senate last week on the delusion that language in a bill can assure that America has a less-than-porous southern border. Florida Senator Marco Rubio — of the firm of Rubio and Schumer — encourages the belief that he shares this delusion. But it’s not words in a bill that secure borders. Only presidents and their administrations can do this. No matter what language survives in “Let’s Annex,” Barack Obama will make no serious effort to staunch the flow of undocumented Democrats into America. Rubio et al. know this.

The other false promises that have been whooped up to perfume this obvious amnesty bill — making illegals pay a fine, back taxes, learn English, and provide for themselves — are laughable. None of these things will happen. Even if any administration of either party had the political will to pursue these things, we don’t have the bureaucratic infrastructure now to keep track of people here on educational and tourist visas. Does anyone believe that anyone would ever be obliged to leave El Norte because he failed his third straight English test?

The urgency behind this issue is totally manufactured. There is in fact no reason to be dealing with immigration just now at all. Existing law is sufficient to secure our borders. We could do a much better job than we do in deporting those illegally here. Rubio claims our current system is amnesty in effect. It’s not. It’s dereliction of duty, on the part of presidents of both parties. We need action, not new law.

Leaving the national interest aside and dealing with politics, Democrats obviously want more Latino voters because they are a natural Democratic constituency. It’s easy to see why they should want to start marching those 11 million (at least) illegals toward the voting booth with all deliberate speed. But it’s less clear why Republicans are in a lather to entice a significant chunk of Central America to come on up. It’s very likely that Republicans could demonstrate their LUV for voters with Spanish last names only to have those voters continue to vote for Democrats. The last time the Republican Party extended amnesty to millions of citizens of other countries was in 1986. In 1988 Republicans got a smaller share of Hispanic votes than they got in ’86, before their Welcome Wagon gesture.

The intellectual rationale for this bill is about as weak as anything to come down the pike for years. And the so-called moral arguments for going along with this mass manufacturing of Americans don’t hold up well either. Conservatives need not be intimidated by those who argue we must extend amnesty to law-breakers in order to be “fair.” This may make sense to fair-minded Americans who sympathize with people looking for a better life (as I do). That is until you think about it. Are we to be fair to everyone on the planet who would prefer living in America to where they are, or just to those who have been bold enough to break our laws to get here and then announce to us what they are entitled to?

Those who argue that we can’t deport 11 million people here illegally are probably right, though we’ve never seriously tried departing large numbers of people. Many of the 11 million have been productive here for years and would make good citizens. Others have been less than a bargain and should be obliged to return to their own countries. Extending blanket amnesty to everyone prevents us from doing this sorting and obliging, and is therefore a very bad idea.

Friday Lisa Murkowski of Alaska became the 11th Senate Republican to announce support for the Senate bill. So that body (the Senate, not Lisa) may be a lost cause. With any luck there will be sufficient lucidity in the House, even with weak leadership from John Boehner, that we won’t soon be passing out get-into-America-free cards by the millions.

Larry Thornberry
Follow Their Stories:
View More
Larry Thornberry is a writer in Tampa.
Most Popular
1
Crime Time
New York Attorney General Letitia James Must Resign — and Be Prosecuted for Abuse of Power
by Jeffrey Lord