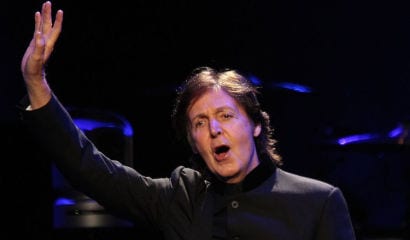 A little over three years ago, I was perturbed with Paul McCartney for dissing former President George W. Bush when he received the Gershwin Prize for Song during a reception at the White House. The ex-Beatle quipped that Bush didn’t know what a library was. At the time I wrote:

As for me, this episode doesn’t mean I’ll never listen to the Beatles, Wings or McCartney’s solo material again. However, I might have second thoughts about spending a couple of hundred dollars to see McCartney in concert.

With that, I saw fit to attend Sir Paul’s performance Tuesday at Boston’s Fenway Park. So what became of my second thoughts?

Well, I managed to spend less than $200 to attend. But that by itself isn’t an adequate explanation. If I had declined to attend McCartney’s show it wouldn’t have mattered to him or to anyone else except me. I would have only been punishing myself.

Besides, in all honesty, I really wanted to be there.

It is quite a spectacle to see a 71-year-old man play nearly 40 songs over nearly two and a half hours (with two encores). “Perhaps there’s something to his vegetarian diet,” I said to myself in between bites of my chicken fingers.

These songs have endured for nearly half a century and remain popular to audiences the world over. In a little over six months from now, it will have been 50 years since the Beatles first set foot on American soil. It is almost inconceivable to think that the music of Jay-Z, Justin Bieber, The Jonas Brothers, Taylor Swift, and Lady Gaga could still resonate 50 years from now.

This is the third time I have seen McCartney perform live. I saw him previously in 2005 at the Boston Garden and at Fenway Park in 2009. As in his previous appearances, McCartney played a mix of Beatles, Wings, and solo material. What was different this time around is that he played only one song that was less than thirty years old. That song was “My Valentine” from his 2012 album Kisses on the Bottom. McCartney noted that he wrote “My Valentine” for his new wife Nancy Shevell. This, however, did not prevent a good chunk of the audience to embark on a collective bathroom break. It’s kind of a shame because “My Valentine” is a lovely song. I am proud to say that I refrained from jumping on this particular bandwagon. It might explain why there were no songs from albums like Flaming Pie, Chaos & Creation in The Backyard, or any material from The Fireman, his electronic music side project. This show was all about the hits and the memories.

Truth be told, it actually took both McCartney and the audience awhile to get into the proceedings. Macca’s voice on occasion shows it age and a good part of the audience has equivalent life experience. It takes awhile for the batteries to charge. I would say it happened after he played “Maybe I’m Amazed.” Once the crowd got into the mood, no one wanted the evening to stop.

In between songs, McCartney kept the banter light. He talked about the signs in the audience and how reading those signs made it difficult for him to concentrate on chord changes. McCartney then jokingly told the audience to put their signs down. There were no cheap shots at George W. Bush or anyone else.

McCartney continues to pay tribute to John Lennon and George Harrison in his live performances. For John, he sang “Here Today” from Tug of War, which was the first album McCartney released following Lennon’s assassination. The sorrow in the song is as apparent today as when he recorded it more than 30 years ago. McCartney implored, “If you love somebody, tell them because it could be too late.” For George, Paul played “Something” on a ukulele George gave him all those years ago.

No McCartney performance is complete without certain songs — or so I thought. Of course, he played Beatle favorites such as “Blackbird,” “Let it Be,” and “Hey Jude” and Wings favorites such as “Listen to What The Man Said,” “Band on the Run,” and “Live and Let Die” (accompanied by fireworks). However, notably absent was “Get Back” from Let It Be and “Jet” from Band on the Run. But the absence of these songs was made up for by the inclusion of “Your Mother Should Know” from The Magical Mystery Tour, “All Together Now” from Yellow Submarine, and from Sgt. Pepper’s Lonely Hearts Club Band there was “Lovely Rita Meter Maid” and “Being for the Benefit of Mr. Kite.”

The crowd did not want to go home. It was left to McCartney to tell the audience he was sorry, but it’s time to go. The fact is that McCartney could have jettisoned his set list and played 40 other Beatles, Wings, and solo tunes and the audience would have gone home every bit as happy. A splendid time is guaranteed for all.

If McCartney continues his touring pattern then he should be due back in Boston in 2017. He turns 75 that year. I will be back to hear him sing no matter what he says.