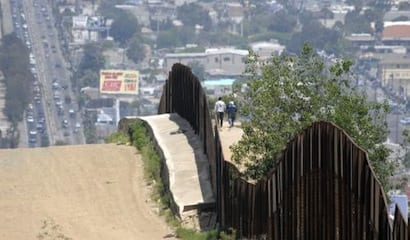 Word out of the U.S. House last week is that Republicans in that body are not keen on pursuing a “comprehensive” approach to immigration reform. So we’re not likely to get BorderCare. Jubilee.

There’s also serious doubt that a House majority can be found to make instant Americans out of 11 million (at least) citizens of other countries here illegally. Both of these items are good news for America’s future.

Whatever action the House takes on the important and sensitive issue of immigration, so current thinking goes, will be step-by-step measures aimed at specific pieces of the immigration problem, not a 1000+ page hairball like the Senate recently coughed up. That Senate bad boy is so full of exceptions, waivers, snares, inconsistencies, political boodle, traps, loopholes, misdirections, false promises, absurdities, ambiguities, unchecked authority for the Secretary of Homeland Security, and other impurities that, had this monster become law, all but its most cynical supporters, years from now, would be asking themselves, “Did I really vote for THAT?”

The elephantine Senate immigration bill, including the infamous Schumer-Corker-Hoeven Amendment, sold as a guarantee of border security by cynics who know it would guarantee no such thing, is not only a fraud but nearly a perfect fraud. “Step right up friends and neighbors. Notice that at no time do my fingers leave my hand.”

The Senate immigration hustle, for which all Senate Democrats and 14 Republicans voted, came with a good deal of gas-baggery and sleight of hand about 20,000 new Border Patrol agents to seal American’s southern border, but no way to fund these agents and the technology they need to do their jobs. It doesn’t even mention those border-violators who enter America legally on tourist or student visas and then stay here illegally. Visa border-hopping accounts for about 40 percent of those illegally in the U.S. and is, Republican Congressman Lou Barletta told me last week, “the preferred method of entering the country for terrorists.” (See Mohammed Atta and his merry men).

The Senate bill, contrary to the heifer-dust being shoveled about by the Gang of 68 that voted for it, does not secure the border, and doesn’t even require that it be secured. It only requires the Secretary of Homeland Security to announce a plan that some time in the future might secure the border. Then the secretary gets to declare when the border is secure by, well, just by declaring it. This weekend we saw the back of a Secretary of Homeland Security who would declare that July is the coldest month of the year in the Northern Hemisphere if it fit the agenda.

But my aim isn’t just to provide another send-up of Schumer-Corker-Hoeven and its perpetrators. That’s been done well and often in the conservative press. Now that immigration is in the House’s court, it’s worth considering what real border security might be like in the unlikely event the political establishment ever gets serious about dealing with the immigration mess.

America’s borders, particularly our southern one, will likely never be 100 percent sealed. But we’ve shown we can seal borders to a high degree. Look at what we’ve done, with the help of allies, in Korea and Germany. Of course these are military operations. But Tom Fitton, president of Judicial Watch, told me he doesn’t see legal impediments to using our troops to help secure the border. “A three-word order from our president would do it,” he said. What has taken place on our southern border for decades could easily be described as a slow-motion invasion.

That said, there’s probably no need for the 82nd Airborne to help separate El Paso from Ciudad Juarez. The first thing serious border security types need to do is finish the 700-mile border fence Congress authorized in 2006 and has not pursued. We also need more Border Patrol agents — Texas Senator Ted Cruz says we need to triple the number of agents on the southern border — and they have to be provided with the equipment and technology required to apprehend border-hoppers. Cameras, sensors, drones, helicopters and other techno-wizzbangery to use on our borders are better investments than cell phones for the homeless. These well-equipped agents also need no-nonsense rules of engagement. No more catch and release.

Pennsylvania Congressman Barletta says any serious attempt to lower the number of illegal immigrants in the U.S. would have to pay far more attention to those who overstay their visas with impunity. He has introduced legislation that would oblige the federals to keep track of those here on visas and assure that they leave the country when their visas expire.

“Real border security would not just focus on the southern border,” Barletta told me. “If you have an international airport in your state, you’re a border state. We could knock out nearly half of the problem if we just got control of people here on visas. Fully 40 percent (of illegals) come here legally on a visa. When the visa expires they just disappear into the population. We need a reliable entry and exit system, and my legislation would require this.”

Barletta, Fitton, and Bob Dane of the Federation for American Immigration Reform, who also discussed this issue with me, agree that real border security is complex and would require resources and political will to get on top of. Almost everyone with an oar in on this one says he wants border security, but there is very little agreement, especially from left to right, on what this means and how to do it.

“Bricks and mortar alone won’t keep people out,” Dane said. “We need to reduce the jobs magnet. Require E-Verify. Rethink birthright citizenship. Stop giving drivers licenses and in-state tuition and other things that keep illegals here. We need to have more consideration for the missing victim in all this — the unemployed American.”

Dane gets no argument from Barletta, who agrees, as do most on the right, that the amnesty the Senate bill provides would create a powerful incentive for millions more low-skill workers to sneak into the country, where they could stay. Barletta says the message amnesty sends south of the border is crystal clear, and will have only one reaction — “Let’s get packed, Honey, we’re going to America.”

Barletta understands that temporary legal status for the 11 million really means permanent legal status. “We would be harming the country and putting it at risk by encouraging more people to come here as amnesty would,” he said. “And the only reason for doing this is political. More and more people on the House side have seen through this. They’re hearing from the people at home. The purpose of immigration policy is to protect our national security and protect the American work force. Amnesty violates both of these principles.”

It easy enough to state what serious border security would require — sufficient border agents with the right equipment and permission to do their jobs, border fencing, effective tracking of foreigners here on visas, an improved and required E-Verify system for employers, cooperation rather than conflict between local law enforcement and the federals. But seeing that America has enforceable borders and control over who is in the country for what reason would be difficult to execute, even when the people involved are trying. It’s just about impossible when successive administrations have no political interest in controlling our borders.

Those serious about American sovereignty and America’s economy have to fight the cheap labor lobby and an administration with zero interest in staunching the influx of undocumented Democrats. The current president has shown he will not enforce those laws that he doesn’t fancy. Judicial Watch’s Fitton nailed this part of the problem when he said, “We’re not dealing with a good faith partner here.”