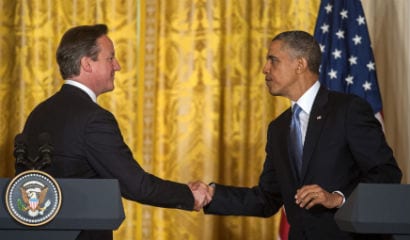 Some words just don’t travel well. In the UK there’s something called the Conservative Party. But American conservatives could study its policies and positions for months on end the way Talmudic scholars study Scripture and run across very little they would recognize as conservative.

This confusion of terms was underlined again this week when Prime Minister David Cameron, the leader of the Tories, but by any sensible measure a generic, post-everything, limousine liberal, took time out from whooping up gay marriage to criticize British gentlemen’s clubs. (My sources at Number 10 inform me that Cameron is also president of the Downing Street chapter of the Jon Huntsman Fan Club.)

You’d think that in a Britain deep in debt, with high unemployment, wallowing in crime, and so full of un-assimilateable Islamist thugs that Her Majesty’s Armed Forces cannot safely walk the streets of London in uniform, the PM wouldn’t abuse his time worrying about old Sir Toby So and So dozing in his over-stuffed chair (Sir Toby being fairly over-stuffed himself), drooling on his waistcoat, and passing gas at his private, men-only club. Cameron’s charge and specification against these boring but harmless old clubs is that they look “more to the past than they do to the future.”

Hmmm. If the past gave this scepter’d Isle Winston Churchill and Margaret Thatcher, and the present David Cameron, God save us all from the future. “Oh, what a falling off was there,” as the ghost of Hamlet’s father framed it. If Cameron and the rest of the UK’s political establishment don’t quit worrying about the lack of women in Sir Toby’s social life long enough to put more intelligent effort into dealing with the real problems listed above, the UK won’t have any future. “There’ll Always Be an England” is just a song, one that didn’t anticipate the hollow men of Cameron’s stripe.

I’m happy not to be a Brit, though a couple of centuries back my lot started out in the market town of Thornbury. I’m grateful for the common law, which England bequeathed us, and for the great literature (though in a painfully politically correct Britain now it’s likely a hate crime to assign Shakespeare to school children, let alone Kipling). And I always enjoy the great local ales when I visit. But I would miss baseball if I lived there. And the poor sods can’t spell a lick. What’s with the Labour Party? Obviously they don’t have No Child Left Behind over there.

But if I ever were to fetch up in the You-Kay, I doubt I would want to belong to a gentleman’s club. I’ve never been much of a joiner, and I hold with Groucho Marx who declared that he would never belong to a club that would have him as a member. That said, it’s still damn peculiar that the head of the Conservative Party of the United Kingdom is a man contemptuous both of the past and of freedom of association.

David Cameron was a child of privilege who did the Eton, Oxford cycle. He’s been a member of various tony men’s clubs during his gilded life. His pre-PM CV is restricted to politics and public relations. (Gee, a national leader who never held a  real job before being kicked upstairs–sound familiar?) His bio says he studied philosophy, politics, and economics at Oxford. But don’t waste time studying his history and his public statements looking for evidence that he knows bugger-all about any of these things. Or that he has a single principle that he’s prepared to explicate and defend.

What Cameron does know about are focus groups, the mummery of over-paid political consultants, and the latest nonsense out of academe and Britain’s all-left, all the time media. He and his wife are so trendy he has a wind turbine on top of his London flat to generate electricity and his wife sports a tattoo on her ankle. How wearisomely with-it.

Though he claims to be an admirer of Mrs. Thatcher, he has shown himself prepared to turn his back on the principles she stood for in order to win the support of young, socially liberal voters. Other than standing by the United States on some foreign policy issues, about the only conservative impulse the party has sustained is refusing to swap the pound for the Euro. Their policies on government spending and taxation could be described as wobbly, and subject to being stampeded by political events. They even support nanny-like higher taxes on caloric food.

On the Conservatives’ watch the British military has been miniaturized, and government welfare spending is about as incontinent as it was under Labour. On the current de-commissioning plan, the Royal Navy, which once truly ruled the waves, will barely qualify as the Royal Coast Guard. There are already more admirals in the Royal Navy than ships.

So, in the face of all this conservative malpractice, Cameron and his Conservatives should really consider cutting Sir Toby a break and turning to serious matters. I count myself among those Americans with great affection for the auld sod. But when I see waste-of-breath leadership from an English cipher-in-chief like Cameron, this Thornberry is glad there’s an ocean between myself and Thornbury. Of course I can’t expend too much energy worrying about leadership in Old Blighty, as we have our own issues here, do we not? The difference being our guy is an authentic leftist, while Cameron is a phony conservative.