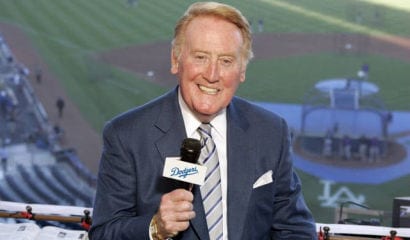 Those looking for good news by reading the morning paper or cruising the Internet must be focused and not easily discouraged. It’s no job for the feckless among us. But news last week that Vin Scully plans to return in 2014 for his 65th year of broadcasting Dodgers games (first of the Brooklyn then the Los Angeles kind) qualifies as good, maybe even great news.

This boon will most benefit Angelinos, who will once again have Vin’s soothing voice to perfume Southern California nights and turn accounts of baseball games into poetry and the pleasure they are meant to be. But the rest of the country can be happy that an articulate, unhurried, and thoroughly civil story-teller can still command air time in our noisy, quick-cut, almost manic age. An age with an attention span about as long as a recruit’s hair on the first day of basic training can still relish Vin Scully’s narrative slow-food.

Vin, who started broadcasting Brooklyn Dodgers games in 1950 as Red Barber’s protégé, is considered by most to be the best baseball announcer ever, perhaps the best sports announcer ever. (I fully expect to hear from the Ernie Harwell and Mel Allen fan clubs on this one, and perhaps from the odd Harry Caray enthusiast. But this is the way I see it.)

Vin has had some minor truck with tennis, golf, and football, but he’s a baseball and a Dodgers man. It’s at least partly because of the current success of the Dodgers — who after a slow start are at last living up to their gaudy payroll and hold an almost cruise-control lead in the NL West — that Vin plans to return for yet another season when he will be 86 years old. Those listening to Vin this year, but unaware of his long and remarkable history, might never guess that the Old Red Head is so seasoned. The voice is still young, even if the man behind it no longer is.

“I have thoroughly enjoyed the excitement of this season, and there is no way I could leave this remarkable team and our great fans,” Scully said when announcing that his remarkable tenure will continue. “With my wife Sandi’s blessing, I’ve decided I’d like to come back and do it again next season. I love what the new ownership has brought to the team and the energy provided by the fans, who have packed renovated Dodger Stadium. It reminds me that other than being home with my family, there is no place else I’d rather be.”

And there’s no place countless Dodgers fans — who over the years have selected Scully as one of the Dodger greats, along with the likes of Pee Wee, Jackie, Koufax, Campanella, Snider, Alston, Wills, LaSorda, Hershiser, et al. — would like him to be than in the booth, relating yet another Dodger game. If, as someone smart once said, broadcasting’s fuel is likability, Vin is running on high-test. Baseball fans in Southern California, with all that region’s problems and nuttiness, are not nearly ready to let go of this ray of sensibility and the only voice of the Dodgers they’ve known for more than a half century.

Scully has earned all this adulation by being unlike the typical loud and garrulous sports announcer who buries listeners in hype, statistics, and Xs and Os, making his game sound more technical and complicated than nuclear physics. Vin, by contrast, never hypes, never overdramatizes, never complicates the story he’s telling. He adds to what viewers are seeing on their screens with anecdotes, background information on players, the well-placed joke, and baseball history from a guy who was on hand for most of it. All of this in erudite, flawless, and always accessible English.

One of Scully’s continuing eccentricities is that he broadcasts games alone, and is probably the only guy in the biz who could pull this off. He has no need, as is standard in broadcast booths today, of the burly ex-jock of a “color man” in coat and tie who clogs listeners’ ears and arteries with nonstop statistics, questionable anecdotes from his playing past, and hints that no one on the planet knows the game any more thoroughly than he does.

Instead of talking to an overstuffed jock to his right, Scully always talks directly to the listener, in the same manner that he would if he were watching the game with the listener in his living room. He always respects his listeners and the games he’s describing. He doesn’t disrespect the opposing team or whine about umpires’ bad calls. He’s always dignified without being pompous. He is, in the old and nearly forgotten meaning of the word, a gent. (I refer those who think I over-praise to the many examples of Vin’s work available on the Internet.)

Scully’s baseball playing days ended after a couple of years as Fordham University’s good-field, not-much-hit center fielder in the late forties. (The late great L.A. Times sports columnist Jim Murray called Scully “The Fordham Thrush with a .400 larynx.”) Scully describes Dodger games as an amateur, as a fan but not a “homer,” and as someone who understands that baseball is meant to be fun, a pleasant diversion from the weightier cares of life.

Unlike so many others in the trade today, Scully recognizes that TV is not radio. Viewers are seeing the game, so they needn’t be told of every development they’ve just watched. Most of today’s play-by-play/color teams seem to be more afraid of a second or two of dead air than Dracula was afraid of sunlight and the True Cross. Vin understands the uses of silence.

“We’re so glad that Vin wants to continue to call Dodger games,” said Dodgers part-owner Magic Johnson, another sportsman of considerable charm but much less erudition than Scully. “Being able to listen to Vin helps make every Dodger game something special.”

He does do that. Though in a sense that Johnson and Dodger accountants may not find so charming, Vin is a huge disincentive to Angelinos fighting some of America’s worse traffic for the privilege of paying extortionist tariffs for tickets to a game where beer comes at mini-bar prices. While trying to relax in their expensive Dodger Stadium seats, fans, like those in other Major League ball yards, will be assaulted by rock music at the threshold of pain, as well as almost incessant commercial pitches and inane activities such as the wiener race, the hide-the-pea game on the jumbotron (which puts out only slightly less noise that a Cape Kennedy blast off), and other inane diversions, seemingly designed to ensure that fans in the stands are not able to visit with each other or have a moment’s peace between pitches of what is otherwise a leisurely and civilized game. Why endure all this when the option exists to listen to Vin’s soothing account while enjoying all the comforts of home?

Vin almost always begins his broadcasts with, “Hi again, everybody, and a very pleasant good evening to you, wherever you may be.” He then invites listeners to “pull up a chair.” High on our long list of blessings is the fact that, God willing, we may for another year pull up a chair with Vin Scully, a man high on my short list of civilization’s friends.