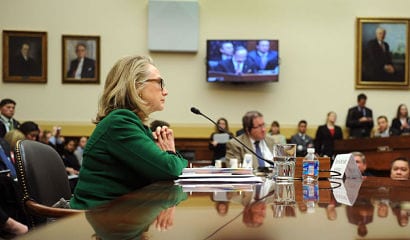 Consider the passage from an article that appeared here regarding my reflections on the attacks of September 11, 2001 exactly one year ago today:

Osama bin Laden will never write another fatwa again. But his words will continue to influence jihadists for years to come…. As I write this, Islamic terrorists are planning to carry out terrorist attacks against Americans on our soil and abroad and, one day, they will strike.

As we all know, on September 11, 2012, jihadists attacked the U.S. consulate in Benghazi killing four Americans, including Ambassador Christopher Stevens. In the days following the attack, the Obama Administration claimed the attacks were a spontaneous response to the Internet film The Innocence of Muslims.

However, it quickly became apparent that this was no spontaneous response to a YouTube video or anything else. Rather, it was a well organized terrorist attack carried out by al-Qaeda on the eleventh anniversary of the attacks of September 11, 2001. Despite the emergence of this fact and the fact that the State Department rejected requests for additional security in Benghazi, Republicans were unable to mobilize public sentiment against the White House and President Obama was easily re-elected.

Republicans also failed to effectively scrutinize then Secretary of State Hillary Clinton when she appeared before the Senate Foreign Relations Committee last January. They were especially ineffective in challenging her infamous reply to Wisconsin GOP Senator Ron Johnson:

With all due respect, the fact is we have four dead Americans. Was it because of a protest? Was it because of guys out for a walk one night who decided they would kill some Americans? What difference, at this point, does it make?

Suppose that Hillary Clinton, when she was the junior Senator from New York, had posed this question following the attacks on the World Trade Center, “The fact is we have 3,000 dead Americans. Was it because of a protest? Was it because of guys out for a flight one morning who decided they would kill some Americans? What difference, at this point, does it make?” Had she done so, New Yorkers would have run Hillary out of the Empire State on a rail.

As it makes a difference why 3,000 Americans were killed on September 11, 2001, it also makes a difference why four Americans died on September 11, 2012. If Hillary had acknowledged it had made a difference, it would give lie to President Obama’s oft-repeated claim that al-Qaeda is on the run. Alas, Hillary ended her tenure in the Obama Administration with her reputation intact and the Democratic Party’s front-runner for the White House in 2016.

The only Republican Senator who threw Hillary off her game during the Benghazi hearings was Kentucky Senator Rand Paul who told her in blunt terms, “I would have relieved you of your post.”

Yet Senator Paul has a lot to answer for where it concerns September 11. Many conservatives took exception when New Jersey Governor Chris Christie chastised Paul for his libertarian views on national security matters, particularly when he said:

I want them to come to New Jersey and sit across from the widows and the orphans and have that conversation. And they won’t, because that’s a much tougher conversation to have.

Yet there is something to Christie’s criticisms. There could be another reason that Senator Paul would be disinclined to sit across from 9/11 families and his name is Alex Jones. The rotund radio host is a longtime friend of Senator Paul and his father, former Congressman and GOP presidential candidate Ron Paul. Both Paul père et fils have been frequent guests on Jones’ show. Jones has made his living peddling conspiracy theories, even about events that have yet to occur. He recently said that Paul will “probably end up being President,” but if he doesn’t it will be because of “electronic voting machine fraud.”

But Jones is best known for claiming the September 11th attacks were an inside job. In a 2010 interview with Nightline, Jones said, “Yes, 9/11 was an inside job. It was staged to launch the Iraq War and set up a domestic police state in the United States.” Within half an hour of the Boston Marathon bombings last April, as the wounded were being rescued and limbs were being removed from Boylston Street, Jones was claiming the attacks were an inside job. One of Jones’ devotees managed to gain access to a press conference to ask Massachusetts Governor Deval Patrick if the attacks were a “false flag operation.”

Paul has shown Jones deference beyond what is defensible. On a 2009 show, for instance, Paul said nothing when Jones alleged that the Federal Reserve once kidnapped a congressman’s baby. A bit later, Paul decried career politicians to Jones, saying that “they get pushed around by the New World Order types.” On the same show, which took place while Paul was campaigning for the Senate, Jones claimed this about Obama’s nominee for “science czar”:

Generally, these social planners admit they want socialized health care, they want carbon tax — he says — to carry out eugenics, and even the forced drugging of the water to sterizlie us. That sounds like Nazi Germany to me. What would you do in the Senate about this?

Well if I were there, we’d get to expose it before he’s gotten a hearing, or during the hearing. These hearings, that’s exactly what they’re for. And wouldn’t it be great to have a voice in the Senate, cause it could expose this before he gets approved?

Even after having such ludicrious questions lobbed at him, Paul did not cut off contact, and continued to appear on Jones’s show up through at least April 2012.

Now I’m not implying that Paul shares all of Jones’s views, particularly those about 9/11. But Paul should still answer the question of why he has had no qualms about chatting amiably with — humoring, even — the man who espouses them. Jones is to Senator Paul what the Reverend Wright was to Barack Obama. For Paul to have a friendly relationship with someone who considers the 9/11 attacks to be an inside job is akin to having a friendly relationship with someone who denies the Holocaust. Unless Paul repudiates Jones and promises to cease appearing on his show, then no Republican should give him a moment’s consideration for the party’s presidential nomination in 2016 or any presidential election hereafter.

Both Rand Paul’s association with Alex Jones and Hillary Clinton’s asking what difference it makes how Americans died sullies the memories of those Americans who were murdered at the hands of terrorists, be it in Boston, Benghazi, New York, Washington, D.C.. or Shanksville, Pennsylvania. Whether by being part of an administration which claims a video inspired a terrorist attack or whether by being associated with someone who claims our government organizes terrorist attacks has the effect of absolving al Qaeda of its responsibility in carrying out terrorism.

A great deal can happen between now and 2016, but if the presidential race is between Hillary Clinton and Rand Paul then God help us all.