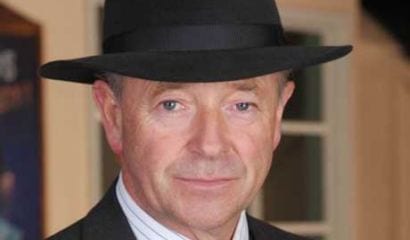 To the delight of his many American friends, Christopher Foyle returned to “Masterpiece Mystery” last Sunday. There will be further new episodes of Foyle’s War, which should probably now be called “Foyle’s Cold War,” over the next two Sundays. This is good news for fans of intelligent drama based around an admirable figure. Way too little of this available these days.

In the new series — all too short at only three episodes — former Detective Chief Superintendent Foyle of the Hastings police constabulary, played admirably by Michael Kitchen, is more or less dragooned out of retirement. Rather than thieves, murderers, arsonists, black marketeers, and other garden variety villains whose lives he inconvenienced during World War II, Foyle is now commissioned to disrupt the work of Soviet spies in post-war England. On the evidence of last Sunday’s episode, called “The Eternity Ring,” our Christopher will be as good at this as he was at jugging criminals in and about Hastings while the Allies fought fascism abroad.

Those who watched the first six seasons know that Foyle is smart, determined, responsible, and methodical, as any good detective must be. But his distinguishing features are his honesty and integrity, which he exercised unfailingly, without being priggish about it, through the challenges and temptations brought about by all-out war. He was no-nonsense in his work as a police officer, but hardly a Javert. He’s clear on the difference between the law and justice. And he knows when tolerance is called for, when to cut someone who has crossed the line just a bit of slack, as he did in last Sunday’s episode.

As much as I enjoyed Foyle in Hastings — I’ll go so far as to say Foyle’s War is one of the finest things I’ve seen on the large or small screen — I wondered how my favorite detective chief superintendent could maintain his moral center as an MI5 functionary in London (London regulars may quickly pick up on the fact that many of the London scenes are filmed in Dublin). Throughout the first six series, Foyle has had various run-ins with the secret squirrels, all of which demonstrated why he would not fit in as one of them.

It’s one thing to be the head knocker of the Hastings constabulary, where the work is transparent and the rules of engagement fairly clear. The chief super here can impose his will on his small organization. It’s quite another thing to operate in the murky, amoral world of spy vs. spy, all below the radar and much of it below the belt. It seems that in an outfit like this a Christopher Foyle would be crushed and spit out.

So far Foyle creator and writer Anthony Horowitz has pulled off the substantial trick of giving us a new enemy and a new environment but the same old Foyle. In “Eternity Ring” it is 1946 and the Soviets are hot to steal atomic secrets, a group of scientists in London being a tempting target in this regard. Hilda Pierce, whom Foyle ran across during the war when she worked for MI5’s predecessor intelligence service, half tricks and half drafts Foyle into helping MI5 sort and thwart Soviet spies and those who enable them.

As is the case in spy vs. spy drama, there is much misdirection, crossing and double-crossing. Individuals and things are often not what they seem. It takes almost Holmesian deduction to parse matters. Foyle does not disappoint. And those, like me, who have sworn off of spy fiction and drama because we don’t relish the world-weary nihilism that goes along with the genre, will find Foyle the anti-spy refreshing. None of your John le Carré spy noir (at least so far).

One of the hooks La Pierce uses to induct Foyle into her distinctly un-merry band is a photograph she has of Foyle’s war-time driver, confidant, and friend Samantha Stewart (played by Honeysuckle Weeks) with a known Soviet spy. The implication, which Pierce knows Foyle will not allow to stand, is that Sam is in cahoots with enemies of the crown. This episode is available for viewing now on the Masterpiece Mystery website, so I won’t reveal any plot details. See it yourself. But anyone who expects things to go badly between these two — who have almost a father/daughter relationship — will be disappointed.

The new series isn’t as homey as the Hastings episodes (hard to be homey in London, even when London is Dublin). Established Foyle hands may find the London and MI5 worlds, as one discerning viewer phrased it, “off-putting.” Hastings and the shooting war were better backdrops for these stories and a better stage for the character of Foyle. But it is so rare that television gives us a character who lives conservative values as thoroughly as Christopher Foyle does, and does so in such consistently excellent drama, that it would be almost conservative malpractice to pass up Foyle’s new war, no matter his new arrangements, and no matter who is on Sunday night football.