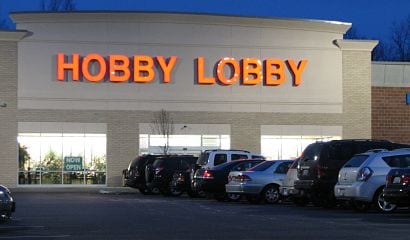 If you began last Friday by scanning the web for interesting news items, you were hit by a tsunami of stories suggesting that the Obama administration wishes the Supreme Court to intervene in its legal battle with Hobby Lobby over that company’s refusal to comply with the HHS contraception mandate. Most of the major “news” outlets began their coverage with a rented AP report titled, “US Wants Supreme Court to Take Up Hobby Lobby Case,” and followed up with tendentious opinion pieces insinuating that the administration took this step to thwart a dark plot by Hobby Lobby to deny its employees birth control coverage.

In reality, the Obama administration “wants” the Supreme Court involved in this case just about as much as you want a root canal. It was forced to file an appeal with the high court because, last June, Hobby Lobby dealt the government’s lawyers a resounding defeat in a federal appeals court. To understand how, one must first understand what this lawsuit is really about. It does not concern, as the Los Angeles Times suggests, whether a corporation can have religious beliefs. The case isn’t even about contraception — Hobby Lobby’s employee insurance plans cover birth control. Hobby Lobby v. Sebelius is about religious liberty.

The First Amendment of the Constitution begins thus: “Congress shall make no law respecting an establishment of religion, or prohibiting the free exercise thereof…” The Hobby Lobby case has arrived on the steps of the Supreme Court because the 10th Circuit Court of Appeals agreed with the company’s owners that the HHS contraception mandate restricts the free exercise of their religion. Rejecting the administration’s arguments to the contrary, the majority wrote, “[W]e cannot see why an individual operating for-profit retains Free Exercise protections but an individual who incorporates… does not.”

The HHS mandate would, of course, force Hobby Lobby to provide its employees with insurance that covers abortifacients like the “morning-after pill,” despite the strong religious objections to abortion held by its owners, David Green and his family. The First Amendment question arises due to the administration’s perverse position that Hobby Lobby’s status as a for-profit corporation deprives the Greens of their right to run the business according to the tenets of their religion. Thus they cannot refuse to provide insurance that, in effect, pays for abortions. It was this weird logic that the appeals court rejected.

The appeals court got involved when U.S. District Judge Joe Heaton rejected Hobby Lobby’s request, in its original complaint against the government, an injunction prohibiting enforcement of the Mandate against the plaintiffs. When Hobby Lobby appealed this ruling, the result was a reversal of Judge Heaton’s decision and a none-too-subtle hint that he should reconsider its wisdom. Heaton subsequently discovered “a substantial public interest” in granting a preliminary injunction. He also gave the government lawyers until October 1 to appeal, which was no small factor in the timing of last Thursday’s request for a Supreme Court hearing.

Most of the establishment media have erroneously reported that the Hobby Lobby case involves the Religious Freedom Restoration Act (RFRA) but not the First Amendment. RFRA is a Clinton era statute that says a person may opt out of a law if it would “substantially burden” the exercise of her religion. The appeals court definitely held that Hobby Lobby is entitled to bring suit under RFRA, but this law’s use of the word “person” has caused much confusion. This is why so much of the commentary surrounding Hobby Lobby v. Sebelius has concerned the irrelevant question: Is a for-profit corporation a “person” protected under religious freedom laws?

The question that matters is not whether a corporation is a person, but whether people must relinquish their First Amendment rights if they own a for-profit enterprise like Hobby Lobby. David Green and his family clearly don’t believe so. Indeed, five of the ten counts found in Hobby Lobby’s lawsuit against the government invoke the First Amendment. Moreover, the first request listed in the lawsuit’s Prayer for Relief asked the court to “Declare that the [HHS contraception] Mandate and the [government’s] enforcement of the Mandate violate the First and Fifth Amendments to the United States Constitution.”

Hobby Lobby is not, of course, the only entity suing the government over the HHS mandate. The Becket Fund for Religious Liberty reports the growing tally of lawsuits: “Today there are 70 cases and over 200 plaintiffs representing hospitals, universities, businesses, schools, and people all speaking with one voice to affirm the freedom of religion guaranteed in the Constitution.” And no fewer than 28 injunctions have been granted besides that which Judge Heaton reluctantly issued in the Hobby Lobby case. This presumably increases the chances that the Supreme Court will agree to hear Hobby Lobby v. Sebelius.

That may or may not be good news for the Green family and many others in similar positions. As we saw in June of 2012, the Court is not a very reliable defender of constitutional principles. They aren’t as ignorant as the alleged reporters who have published so much misinformation about the Hobby Lobby case, but they nonetheless reach some bizarre decisions. If John Roberts can transform Obamacare’s individual mandate into a tax, he can convert David Green and his family into second-class citizens who don’t enjoy the protections of the First Amendment. And, for better or worse, he and his fellow justices get the last word.