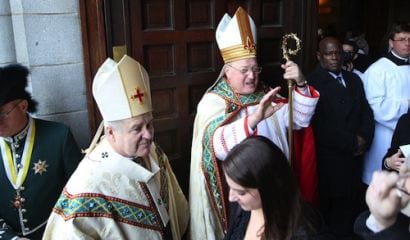 What a contrast with contemporary athletes whose perfidies soak up the air time — Lance Armstrong, the pharmaceutical biker, and Manti Te’o, he of the résumé-enhancing virtual girlfriend. If there were any justice, these two frauds, and many other contemporary athletes, would be sentenced to read and heed everything ever written about Stan Musial.

Stan was laid to rest Saturday at a full-house mass and funeral in his adopted home of St. Louis, with the search still on, fruitless to this point, for anyone The Man disappointed in his 92 years of a most splendid life. Yes, Virginia, you can be one of the most talented athletes of your generation and lead a successful life in public without being a cad, a fraud, a hot dog, a skirt chaser, a chronic complainer, a diva, a druggie, a drunk, or any of the other personal blights that too often now accompany athletic fame and the preposterous riches that come with that fame.

Everyone who knew Stan has stories of his sunny disposition, his courtesy, his lack of pretention, his patience, the way he respected everyone, high or low. He didn’t charge for the thousands of autographs he gave, and his only performance-enhancing drugs were coffee and the odd Budweiser. If free-style common decency were an Olympic event, Stan would retire the gold. Musial brought sunshine into the lives of everyone he touched, with the exception, of course, of National League pitchers who had to try to get him out over 22 years.

Stan’s departure brings us closer to the end of what many consider to be baseball’s golden era, the end of World War II through the fifties, when baseball was truly America’s pastime and Major League stars were looked up to in a way they never will be again. Williams, DiMaggio, and Mantle are already gone. Stan became a giant of this era without the moodiness of Mantle, the prickliness of Williams, or the hauteur and hermit tendencies of DiMaggio. Doubtless this is why Stan’s funeral, like Cardinals World Series games, was standing room only.

The Cardinals were in the World Series in ’42, ’43. ’44, and ’46, Stan’s first years. They then took the rest of Musial’s long and illustrious career off. But Stan was the nice guy who finished first on fans’ scorecards, even when the Cardinals built some forgettable teams around him. The only thing that could have improved on Musial’s brilliant career would have been more October Stan. What a treat it would have been to have watched Stan go up against Whitey Ford and company in those fifties championship series.

One of the backbones of Stan’s virtuous life was his deep religious faith, an aspect of Stan’s long journey that is not often remarked on. Stan, family call-sign Stosh, was the son of Polish and Czech immigrants and a lifetime devout Catholic. He attended mass, both home and away.

Another kind of Cardinal, Timothy Dolan, Archbishop of New York and president of the U.S. Conference of Catholic Bishops, presided at Musial’s funeral and spoke of Stan Musial, man of God. For much of Musial’s post-playing days, Dolan, a baseball enthusiast, was St. Louis auxiliary Bishop, and Stan was one of his flock.

“You’re standing there, and you’re trying not to notice that it’s Stan Musial coming up to get Holy Communion,” Dolan said. “And here comes of one the greatest ball players ever — he had the world by the tail — and yet the reverence with which he approached this sincere act of faith, this union with the Lord in church. That’s what it’s all about.”

As much as many baseball fans have treasured the opportunity to meet Stan, Stan the international traveler was more than pleased in the seventies to meet the then archbishop of Krakow, Karol Wojtyla, later to become Pope John Paul II. Stan later enjoyed private masses with John Paul II, a former jock himself from early days who was comfortable with the world-class athlete and sincere Catholic that was Stan. On one visit, a Catholic priest who knew Stan encountered him on the staircase to John Paul II’s chambers. Stan told the priest it was OK for him, Stan, to be there because, after all, he was a Cardinal.

Stan’s unique mix of humility and self-confidence has been remarked on. Stan never bragged or played the self-important guy. But he didn’t do false humility either. He knew he had a gift from God, and so could do things athletically that other men couldn’t approach. A story Dolan told illustrates this.

On one of their lunch dates, Dolan asked Musial what he thought he might hit if he played today. Musial said, “With a juiced-up ball and bat and AstroTurf, I might hit .275.” Dolan protested that Musial was selling himself short. Stan shrugged and said, “Well, I’m 80.” Those who saw The Man in his prime have no trouble imaging an 80-year-old Musial loosening up and hitting some frozen ropes.

Go with God, Stan. Thanks for your life. Thanks for showing us how it can and should be done. And you two clowns — Lance and Manti — pay attention dumbheads!!