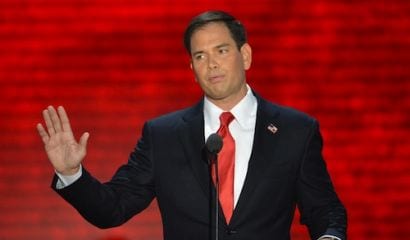 O’Sullivan’s Law, propounded by the prescient British journalist John O’Sullivan, teaches us that “any organization or enterprise that is not expressly right-wing will become left-wing over time.”

Exactly so. We see this in our foundations, corporations (especially large ones), schools, universities, churches, news media, entertainments, even military services. My shorthand term for the animating driver of this is leftrifigal force. It is everywhere and all-powerful in the West. Most everything falls before it (save a few obstinate remnants like TAS). The force has been too much with us, and growing stronger since the sixties.

The law and the force apply to individuals as well. The latest victim of the force, and a particularly sad case, is Marco Rubio. I had the privilege in 2010 of covering the three-way U.S. Senate race in Florida for TAS, the one Marco Rubio won by 20 points over a Democrat and that political shape-changer Charlie Crist (who was first a Republican then an independent during that race, is now a Democrat, and doubtless one day, if he sees a political advantage in it, will announce that he’s a Druid). So I know how smart, knowledgeable, and articulate Rubio is, three qualities few politicians have, and which Marco is richly blessed with.

But to be a conservative and to count on politicians is to invite heartache, headaches, tremors, night sweats, panic attacks, and large bowel complaints. I’ve learned not to do it. So Rubio’s accommodating the Left on women in combat, and becoming a co-conspirator with them on immigration, is a disappointment but hardly a surprise.

After the Joint Chiefs caved to the political Left on women in combat, Rubio threw his support to this cultural disfigurement, saying that we ought to send the “best soldiers” into combat “regardless of gender.” This statement is high-minded, beside the point, and silly on the face of it. I’ve had enough face time with Marco to know that he knows this, and is simply, like so many others in his party, accommodating what they consider inevitable. (Since November, the Republican creed seems to be, “Where do we go to surrender?”)

But the most serious charge and specification against Rubio concerns his putting forward the “We Don’t Need No Stinking Borders Act of 2007 — 2.0,” a capitulation to the Left on immigration (though with millions having walked and driven across our southern border, invasion is a better word than immigration). No surprise that the gang of eight pushing this frontal assault on American sovereignty contains a guy name Flake. We’re all flakes if we let them get away with it.

High sounding principles aside, giving even provisional status to the 11 million (or is it 15 million or 20 million?) citizens of other countries illegally here, most from south of the border, would put an end to such little deportation as in going on now, and would act as a magnet for millions more to come to El Norte, adding to our burden of government-service-sucking unemployables. We don’t have enough administrative capacity to keep up with the people here now on tourist and student visas. To administer all the hoops Rubio says he wants illegals to jump through as part of his “comprehensive” plan would require hiring thousands more federal bureaucrats, whose high-priced document stamping would not lead to anyone being obliged to return to the country he is a citizen of.

It’s particularly pointless – other than as a craven attempt to attract the votes of people with Spanish last names – to float this very bad legislation now. Our current president has made it clear that he has no intention of enforcing current immigration laws. No reason to believe he would do anything but bob and weave around any new laws.

As on all days, there were plenty of hustles being run in Las Vegas Tuesday. But none bigger than President Obama’s knee-slapper of a claim that his administration is doing a swell job on border security and just wants to get better at it. This one would give Pinocchio whiplash. Anyone who believes Obama and the folks in his party are the least interested in staunching the flow of undocumented Democrats into the United States would believe that Lucy will hold the football so Charlie Brown can kick it.

One can have compassion for people who wish to leave a poor and corrupt country for a better life, without concluding that the United State should accommodate the tens, perhaps hundreds of millions of people who fit this description. Compassion becomes us all. But as G.W. Bush proved, it’s not a policy.

Obama tried to grease his hustle by suggesting yesterday that comprehensive immigration reform would bless America will all manner of high-contributing citizens. The sad fact is that for every engineer, scientist, or entrepreneur Obama’s open borders approach would net us, we would also be on the hook for the support of a large multiple of unskilled and unemployable people, many illiterate in two languages. Prosecution stipulates that America is a “nation of immigrants.” But earlier waves of immigrants came to a country in need of their labor. Today we are more than topped out with superfluous pool cleaners and leaf-blower operators.

The policies Rubio and his colleagues are ginning up – essentially the same ones American voters made clear they wanted no part of in 2007 – would, if enacted, not even benefit Republicans politically. Every poll shows that people with Spanish last names aren’t that different from people who don’t have Spanish last names on immigration policy. (I use this longer form because I so dislike that horse-pucky word “Hispanic,” which describes a universe of people with more differences than similarities.) Democrats looking for votes and voters, indignation groups, and general left-geeks want open borders. I can’t see that walking-around Americans with Spanish last names are keen to give all the line-cutters get-into-America-free cards.

We’ll be hearing a great deal more about this emotional issue over the next weeks and months. Obama says he’s in a hurry on this one; Rubio says he’s not. Smart money says Obama knows nothing much will come of this and he just wants the issue as a continuing excuse to call Republicans heartless meanies. On the other side, Republicans will natter on about how they just love folks with Spanish last names. The traffic will be noisy, but, sadly, on both sides of the aisle, mostly fraudulent. Including the slight-of-hand nonsense we’re getting from Marco Rubio, a very smart guy who is having us on a bit just now, and hoping his conservative supporters won’t notice.