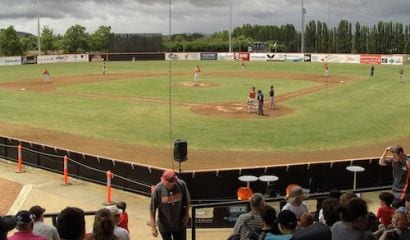 RET Jr. is right. The 2012 NFL season was one of the best ever. I watched more pro football this year than I usually do, down to the Super Bowl, which was vastly entertaining (save for Above and Beyoncé’s noisy, smoky, and graceless seminar in dry-humping).

For patriots addicted to competitive sports, the period between the Super Bowl and the first spring training game can be arid, and unendurably long. (There was some relief Sunday in the form of some great basketball between Indiana and Ohio State – the Oladipo kid is worth watching, even for those who can’t pronounce his name.) So I happily greet and spread the news that pitchers and catchers report to spring training camps in Florida today, and get to work Tuesday. Jubilee!

I’m so delighted that the Grand Old Game is back that I’m reviewing our lesser holidays to determine if perhaps one could be traded for Pitchers and Catchers Day. This annual renewal is certainly a bigger event on my calendar than some of the Mondays that bankers and United States Postal Service employees get off now.

Regular readers of this space know baseball is my favorite, and that this time of year I weary of games that aren’t baseball. So eager am I for a baseball fix in February, there should be no surprise that I spent last Saturday afternoon with MLB-TV and the final game of the Australian Baseball League Championship Series (a best of three business), which the Canberra Cavalry won 7-6 over the defending ABL champions, the Perth Heat.

I didn’t have a dingo in this hunt. I was just glad to see my game again. ABL play is about the level of Class-A ball in America. And the stadium in Canberra looks about like a spring training, Class-A minor league ball yard in the lower-48. It’s baseball only, and well kept. The ABL has only been around since 2009, but baseball has been played in Australia since the 1930s. The crowd Saturday was enthusiastic for their hometown team, but baseball down under is a secondary sport, drawing little fan or media attention. The sports Aussies prefer are (not necessarily in this order) cricket, soccer (aka football, or “footie”), and rugby (a bar-fight with a ball).

There was some less than lustrous D Saturday, at least for those used to the Major League product here. A couple of 6-4-3 double-plays (and could-have-been double-plays) looked like they were in slo-mo rather than real time. And infield throwing wasn’t sharp. Saturday was also a lesson, by the opposite example, of how good American baseball is filmed for TV here. On more than one occasion the active camera was not the one focused on the action, including one instance where we were treated to a guy cruising into third standing up while there was a play at the plate.

It took me some time to get used to the speed gun numbers in kilometers per hour. Early on the Perth pitcher got a K on a 133 KM change-up — which the play-by-play guy called a chinge-up (long i). And the game featured many bice hits. Pitches ranged from 123 to 149 KM (this last being 93 mph).

But these are nits. I enjoyed the game, which was played with energy and enthusiasm by the participants on a beautiful late afternoon and evening in Canberra. Many of the players have only competed in Australia, including 40-year-old Michael Wells (Australia’s “Boomer”), whose solo homer in the 8th for Canberra was the winner. But there are several American minor leaguers in the six-team league. As Australia is upside down, the ABL season is November to February — the non-baseball months here.

I regret to see the down-under players copying our tradition of championship game winners piling into a manic scrum on the field. While the Cavalry celebrated, Heat players demonstrated they have their losers’ mope down well. After the series MVP award was presented, the winning manager was presented with something called the Claxton Shield, the prize for baseball excellence down under. I don’t know who Claxton is or was. But I hope he’s not the fruitcake guy. I’d as soon not mix something I love, baseball, with something I could, being charitable, get on just as well without.

So thanks to the Canberra and Perth boys for a couple hours of baseball pleasure. Ahead is a 2013 American baseball season I hope will be as good as 2012 football. Will my Tampa Bay Rays find a way to be competitive, as they have been since 2008, on the smallest player salaries in the bigs? Will the Yankees and the Dodgers buy their divisions? Is the Trout boy for real? We’ll know soon. That suits me fine. So let me be the first to wish TAS readers a happy, healthy, and prosperous Pitchers and Catchers Day.