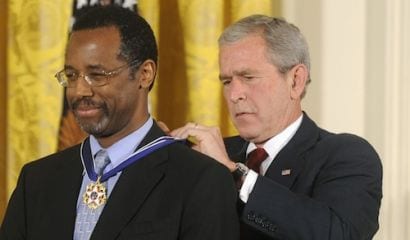 And he will make an hour-long house call with Sean Hannity in a Hannity Special on Fox News Friday night.

Along with a handful of guests in an on-set audience, of which I will be privileged to be one.

Dr. Carson, of course, has been in the news lately for this speech at the National Prayer Breakfast. In which, with a surgeon’s precision, the good doctor deftly dissected both Obamanomics and Obamacare — with President Obama seated two seats away.

If you aren’t yet familiar with Dr. Carson you should make the time.

Here is a man whose single mother, one of 24 children — you read that right — married at 13, had two children (Ben and his brother Curtis), eventually finding out that her husband had an entirely different wife and family. Which is to say, he was a bigamist and soon departed from Ben’s family when the discovery was made by Ben’s mother. He was as well a man with an alcohol problem. Mom had a third grade education.

Not exactly an auspicious start for a young African-American kid in Detroit.

But Mom — that would be Sonya Carson — presented with her share of life lessons that every human being walking must face, was paying attention to her two boys. First, she set the example herself. Determined to avoid the welfare system, she worked “constantly,” Carson tells us. Her faith in God having her insist to her son, “Bennie, we’re going to be fine.”

No. she said, you cannot watch television all the time. She laid down a rule — one of many. Young Ben would not be allowed more than two or three TV programs a week. What he must do instead is read two books from the Detroit public library — and write book reports on each.

So began Ben Carson’s lifelong love affair with education — with reading. Dutifully, he would make the trek to the library, read the two books of his choice, write up book reports — and get them back from his mother with a check mark to acknowledge his work.

Did I mention that Sonya Carson couldn’t read? No matter — only much later would young Ben figure this out. In the meantime Ben Carson went from being called “dummy” by his fifth grade friends to a top student at Yale University not to mention the top of his class at the University of Michigan Medical School. And now one of the world’s most accomplished (not to mention famous) physicians, presented with the Presidential Medal of Freedom by President George W. Bush.

With his low-key bedside manner that doctors the world over must surely envy, Carson’s story is the stuff of Hollywood movies — and in fact there is a movie. A movie based on Carson’s own autobiography Gifted Hands, starring Cuba Gooding Jr. as Ben Carson. Here’s the trailer for the film and over here some excerpts. Here’s a link to the book version as well as Carson’s current bestseller America the Beautiful: Rediscovering What Made This Nation Great.

What’s striking when one reads Gifted Hands is seeing just how Carson refused the lure of blaming his problems on race. When one reads Carson in Gifted Hands — and goes back to read President Obama in Dreams From My Father — the difference between the two men is striking.

Here’s Carson on race and what he refused to do:

I could easily have decided that life was cruel, that being Black meant everything was stacked against me.

Contrast this with Obama on race and what he has spent a lifetime doing:

Black survival in this country had always been premised on a minimum of delusions; it was such an absence of delusions that continued to operate in the daily lives of most black people I met.

This is the bleak Obama world view that led to the building of a political career seamlessly meshing and manipulating resentment — racial, class, and gender resentment — into a “transformed” American way of life.

Ultimately en route to making all of America, as noted in this space before, a society of beggars.

That is an America in which Sonya Carson and her son refused to live. Mrs. Carson, her son notes, was an extremely observant woman. While working two and sometimes three jobs at a time she cared for children and cleaned houses as a domestic. Applying her power of observation to wealthy employers, she would come home at night and tell her son:

“This is what wealthy people do. This is how successful people behave. Here’s how they think.” Then: “Now you boys can do it too, and you can do it better!”

Is it any wonder that the Carson speech — make that Carson’s life — has hit millions of American with the force of a thunder clap?

There is another interesting aspect of Carson’s life that stands in stark contrast with American liberalism. Compare this from Carson’s approach to his medical studies:

I started learning how to study, no longer concentrating on surface material and just what the professors were likely to ask on finals. I aimed to grasp everything in detail. In chemistry, for instance, I didn’t want to know just answers but to understand the reasoning behind the formulas. From there I applied the same principle to all of my classes.

Catch that? He would “grasp everything in detail” and apply to all of his classes and each subject.

“But we have to pass the bill so you can find out what is in it.”

Which is to say, neither Pelosi or her colleagues deigned to read the bill they were passing. Decidedly the opposite of Carson’s approach to “grasp everything in detail.” No wonder there are people wondering why American health care is suddenly being consumed with people and institutions demanding exemptions from this or that regulation or laying off employees or spending hours on end trying to appease an angry Catholic Church because of various mandated rules are blatant violations of the Constitution.

Back in May of last year Carson went to Emory University to make the case for opposing political correctness. Saying:

I think the other thing that threatens the prosperity and the vitality of our nation is political correctness. Many people came to this nation, and they were trying to escape from societies that try to tell them what they could say and what they could think. And here we come, reintroducing it through the back door.

And I’ve always said, “If two people think the same thing about everything, one of them isn’t necessary.” We need to be able to understand that if we’re going to make real progress.

There was a time in the history of the world when there was great intolerance for anybody who thought differently than the mainstream. It was called the Dark Ages. There are some things that can be learned, even in places and in societies where we think we know everything. Because if you look over the course of time, you will find a migration of what is thought to be the truth. And if we all engage in appropriate intellectual discussion, I think we will get there much faster.

What does this mean for Carson in practice?

In practice this means Carson himself doesn’t hesitate to violate all the soul-shrinking nostrums of political correctness, as his Prayer Breakfast speech demonstrated. He thinks America is awash in malpractice cases not because doctors are so incompetent in America — but because of a system that is tailor-made for trial lawyers. The man who had his father walk out the door dares to say fathers are essential to family life. And to critics who are furious that he stood up at the Prayer Breakfast and criticized the President who was sitting two seats away, Carson gently reminds that America is not a monarchy.

Where have we heard Carson-like thoughts just this week?

That’s right: from Senator Marco Rubio the other night in his response to the Obama State of the Union Address. Rubio sent chills down the backs of liberals when he emotionally noted his immigrant background and his middle class upbringing. Rubio is “dangerous” said ex-Obama aide Van Jones.

What drove the liberal concern? When Rubio said:

The State of the Union address is always a reminder of how unique America is. For much of human history, most people were trapped in stagnant societies, where a tiny minority always stayed on top, and no one else even had a chance.

But America is exceptional because we believe that every life, at every stage, is precious, and that everyone everywhere has a God-given right to go as far as their talents and hard work will take them.

Like most Americans, for me this ideal is personal. My parents immigrated here in pursuit of the opportunity to improve their life and give their children the chance at an even better one. They made it to the middle class, my dad working as a bartender and my mother as a cashier and a maid. I didn’t inherit any money from them. But I inherited something far better — the real opportunity to accomplish my dreams.

This opportunity — to make it to the middle class or beyond no matter where you start out in life — it isn’t bestowed on us from Washington.

Neither man — one black and one Latino — spends a minute of his time playing the race card, playing the class warfare card, pitching to resentment. What they both have in common is a love of America, and the learned experience that hard work and discipline will bring success.

Rubio burst onto the national scene three years ago.

Carson, who has been on the national scene but as a physician not as visible as a politician, has now suddenly burst into the larger American consciousness. “Ben Carson for President” suggested the Wall Street Journal.

What does Ben Carson have to say about that?

America will find out tomorrow night.

But the overwhelming response to Sonya Carson’s son Ben — the man who simply refused to believe he couldn’t make his dreams come true — dreams that have now saved one human life after another, many under dramatic circumstances like separating Siamese twins joined at the head — has been overwhelmingly positive.

As the Obama years roll on, as America becomes financially sicker by the day, its health care system and so much else in serious trouble, it isn’t brain surgery to realize just why so many Americans have stopped to listen to Dr. Ben Carson.

And why so many will doubtless tune in to this particular Hannity Special.

Finally, America’s Doctor is in the house.