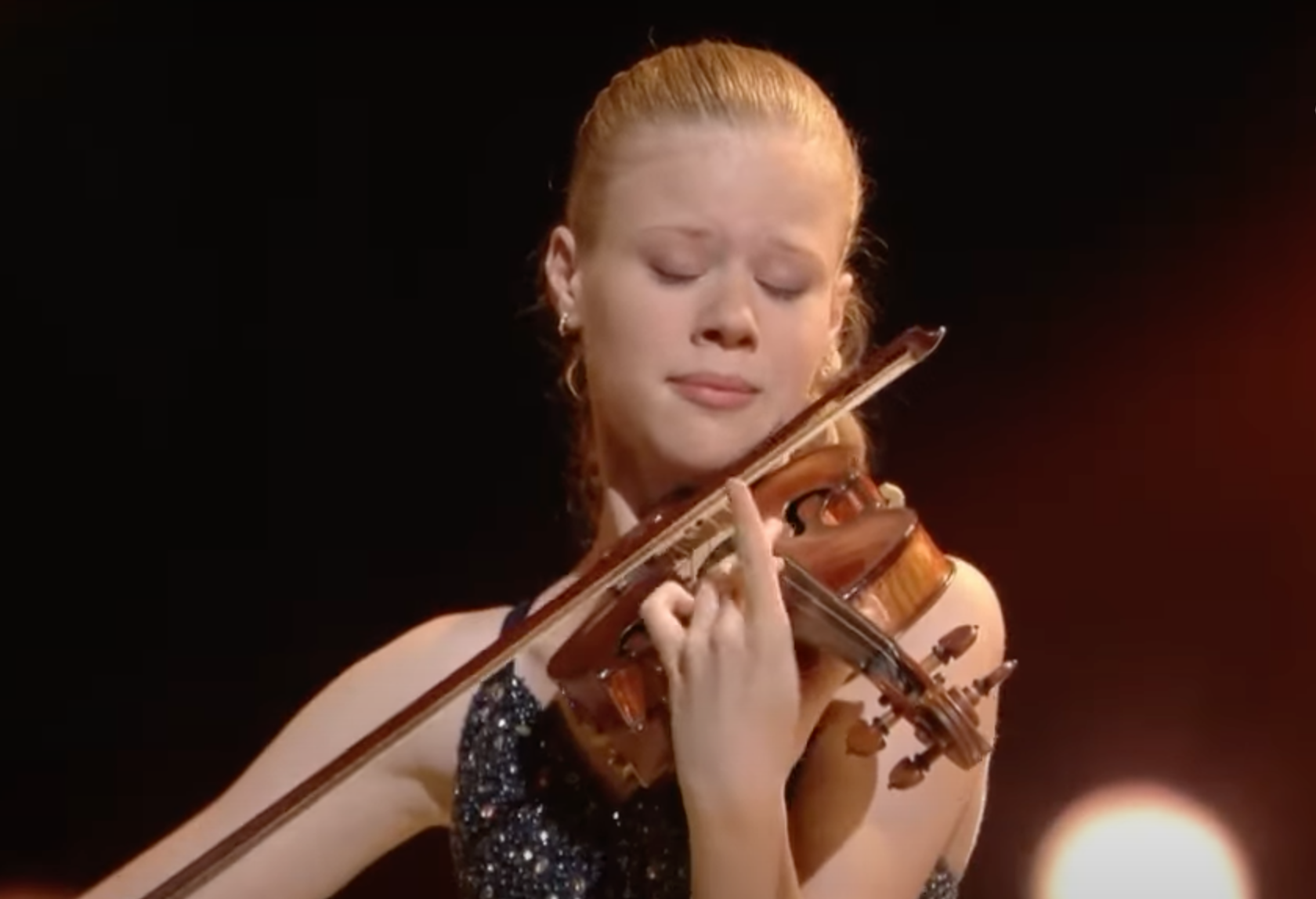 Last Saturday evening, thanks to a spontaneous bout of channel surfing, I found myself watching, on NRK, Norway’s public-broadcasting network, the opening minutes of something I never even knew existed: the Eurovision Young Musicians competition.

Eurovision Young Musicians is not — very decidedly not — to be confused with the Eurovision Song Contest, the annual event that began in 1956 and that this year — from May 10 to 14, to be specific — saw no fewer than 40 countries competing over the course of three nights for top honors.

The Eurovision Song Contest started out as a competition between catchy little pop tunes sung in their native languages by conservatively clad performers to the accompaniment of a professional orchestra; these days it’s still a contest, but the performances, by often outrageously dressed, coiffed, and made-up vocalists who usually but not always sing (or, not infrequently, shriek or yelp or bellow) in English, with nothing resembling an orchestra in sight, are mostly campy spectacles complete with high-tech sound and lighting effects that make the aesthetic merits of the songs themselves seem almost beside the point.

No, the Eurovision Young Musicians, which this year was broadcast live from Montpellier, France, is something totally different. Yes, like its older, far more famous, pop-oriented sister, it’s sponsored by the Eurovision Broadcasting Union. But this show is meant for another type of musician — and another type of audience — entirely. Founded in 1982, it takes place (customarily) every two years, and it presents instrumentalists between the ages of 12 and 18, each of whom performs a classical composition of his or her choice to the accompaniment of (wow!) an actual philharmonic orchestra. In recent years, so many countries have wanted to participate in the Eurovision Song Contest that they’ve had to break it down into two semifinals and a final; the Eurovision Young Musicians, by contrast, has been of interest to a dwindling number of countries. This year’s edition had only nine entries, the smallest number since 1984.

I’m not equipped to say who was best. That’s not the point. They were all terrific. Okay, I do think my favorite was the clarinetist — who in the jury vote, as it happened, ran out of the money, with Czechia winning, Germany placing, and Norway coming in third. Whatever. What mattered was this: Aside from being moved by the beauty of the musical selections — some of which were unfamiliar to me and all of which were played with a sensitivity that seemed well beyond the performers’ years — I was moved by the thought of these kids’ love of music, their remarkable self-discipline, and the years of assiduous practice that had obviously gone into turning them from curious children into mature artists, from callow students into professional artists capable of making lasting contributions to the corpus of world music.

And I couldn’t help thinking the following: Nowadays, throughout the Western world, kids who are the same age as these ones are being seduced — and in many cases destroyed — by insidious, reality-defying ideologies that, casting aside all thoughts of the true, the good, and the beautiful, reduce all of human life to an endlessly repeated tale of oppressors and victims, divide all people according to permanently fixed identity group categories, and call on young people to take to the streets and destroy. Blessedly, these aspiring musicians managed to escape all that corrosive rubbish. Instead of undergoing indoctrination that would have equipped them to be nothing better than Antifa or Black Lives Matter rioters, they spent their tender years acquiring and perfecting skills that have enabled them even now to create rather than to destroy — and to do so, indeed, on a stirringly high level.

This kind of achievement, I reflected, is what it takes to sustain a civilization.

Between their performances, the young musicians were interviewed. They exuded decency, poise, and humility. They talked about why they love their particular instruments and how much they love music. A couple of them said that playing music — and, for that matter, listening to it — takes them out of themselves and into another dimension, a phenomenon that they tried to put into words. Of course, they couldn’t put it into words. No one ever has. That’s what the music itself is for.

Oh, and aside from Antifa and BLM, there’s another bullet these kids dodged. They’ve grown up in a time when the geniuses who promote critical race theory complain that, as one of them put it, “Eurocentric music education can validate and perpetuate white supremacy” — thereby establishing a hierarchy of values that places “white” music (Beethoven, Brahms) above “black” music (blues, hip-hop) — and that it should therefore be radically transformed, if not altogether eradicated.

In a 2017 paper, for example, Juliet Hess, a music professor at Michigan State University, spelled out the need, in a nation awash in “unmasked white supremacy” after Donald Trump’s election, “for music education to move out of terminal naivety” on race and “center issues of race and racism in daily praxis.” In a July 21 interview with a classical music website, Joyce McCall, a music professor at Arizona State University, complained that most U.S. university curricula “giv[e] you a really nice snapshot of Western Europe” and thus exclude people who “can’t perform that type of music.” McCall said that when she was a young clarinet student there were “folks in my neighborhood who always be like, ‘Man, y’all always playing that white people’s music.’” Hence, in college, she refused to play the standard clarinet piece, the Mozart Clarinet Concerto — in fact, she bragged, she’s still never played it, and she makes sure her students know that.

How fortunate those kids in Montpellier are never to have fallen into the hands of teachers like that.

Having lucked out on Saturday evening, I turned on the TV again the next day. And what I found was something very different but, at the same time, very much the same: the 2022 World Athletic Championships, live from Eugene, Oregon. Parenthetically, it was nice to see that something in Oregon — namely, Hayward Field at the University of Oregon — hadn’t yet been burned to bits by Antifa. Anyway, for a couple of hours I watched men’s pole vaulting. Sweden’s Armand Duplantis broke the world record of 6.21 meters; Chris Nilsen, an American, took the silver.

But again, who won or lost wasn’t the point. Every one of the competitors was a marvel, making the whole act of pole vaulting — from the approach to the plant and take off to the swing-up and extension and turn and fly-away (I looked up the basics of pole vaulting online) — a thing of beauty. It was not unlike watching Baryshnikov dance. I’m not a sports guy, but I was transfixed. Like the Eurovision Young Musicians, this was another bravura display of youthful skill.

For two evenings in a row, then, I found myself contemplating how miraculous it is that human beings are able, at remarkably young ages, and with enough practice, to accomplish extraordinary things that leave their elders gasping in awe. I thought about what a risk-filled mystery the teenage years can be — at least as full of pitfalls as of promise — and about how inconceivably precious it is, therefore, when young people find paths to follow that, with any luck, will afford them a spiritually rewarding journey to a happily productive adulthood and — just possibly — to immortal glory.