Loose Canons Afghanistan,Biden,Russia,Ukraine,Vladimir Putin Will Ukraine Survive Putin? - The American Spectator | USA News and Politics
Menu
Loose Canons
Will Ukraine Survive Putin?
Reports of Putin’s health problems should not lead the West to lower its guard. He may prove even more unstable and dangerous, not to mention the danger posed by his cold-blooded inner circle.
by Jed Babbin
Vladimir Putin in 2008, with Nikolai Patrushev on the left (Kremlin:ru/Wikimedia Commons) 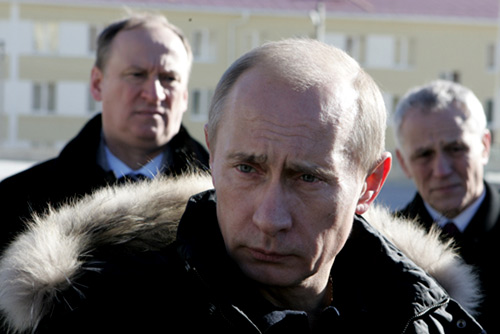 Russia’s invasion of Ukraine has now passed the 100-day mark with no end in sight. Fighting is intense in the eastern Donbas region while Russian forces try to interdict weapons shipments coming in from Poland and other nations.

Most of the world is now suffering from “Ukraine fatigue.” Some nations’ leaders and others are trying to suggest ways out of the war. President Biden has said previously that there needs to be an “off ramp” for Putin to exit the war gracefully. The ever-unhelpful French President Emmanuel Macron upped Biden’s ante by saying we must ensure that Russian President Putin isn’t “humiliated” by the outcome of his Ukraine invasion.

Some who should know better — including former secretary of state Henry Kissinger — have advocated Ukraine trading land for peace. When asked about it last week, President Biden implied that Ukraine should make such a trade.

Biden said, “It’s their territory. I’m not going to tell them what they should and shouldn’t do. But it appears to me that at some point along the line, there’s going to have to be a negotiated settlement here.”

From the Sudetenland in Hitler’s Europe to the Gaza Strip and West Bank in Israel, the only thing that trading land for peace ensures is that dictators will be appeased and encouraged by such surrenders. If Ukraine concedes part of its country to Russia in return for peace, the peace will last only as long as it takes for Russia to recoup its losses and resume the war.

Isolationists in Congress and the media are objecting to new military aid for Ukraine because it costs too much. It’s a pittance compared to Biden’s reckless trillions in spending that has brought us 8-plus percent inflation.

Putin and his regime are still entirely uninterested in ending their aggression in Ukraine. But another factor — Putin’s health — may bring about an end to that war or cause it to become far more dangerous.

Russian President Vladimir Putin will be 70 years old in October, if he lives that long. We have heard for years that he suffers from Parkinson’s Disease, which — among other symptoms — causes hallucinations and delusions.

The U.S. intelligence community said last week that Putin has cancer and is being treated for it. A Newsweek report also said that Putin is increasingly paranoid about his hold on power and that he had survived an assassination attempt in March.

What happens if Putin dies while his war in Ukraine is still going on?

When he first came to power in 2000, Putin was asked about his colleagues in government. He named five men whom he said he trusted most: Nikolai Patrushev, Sergei Ivanov, Dmitry Medvedev, Alexei Kudrin, and Igor Sechin. Four of those men remain in Putin’s inner circle. Ivanov apparently faded when Sergei Shoigu became defense minister and one of Putin’s closest advisers. But Shoigu, after Russia’s army performed miserably in Ukraine, is probably no longer part of Putin’s inner circle.

The original five were all “siloviki,” men who had served in Russia’s intelligence organizations before they became part of Putin’s inner circle.

Putin made Igor Sechin chairman of Russia’s massive government-controlled energy company, Rosneft, and was believed to be the second most powerful person in Russia. He is clearly still part of Putin’s core cadre.

Russia, as is any autocracy-dictatorship, is stable only as long as its chieftain — in this case Putin — can perform his duties. In about April, when Putin may have undergone cancer surgery, Patrushev may have briefly taken over Putin’s duties.

If Putin dies there will be a contest among Putin’s inner circle to take control of Russia. Old rivalries may ascend to enmities that may or may not be resolved peacefully. That will result in instability in Russia that could be dangerous not only to Ukraine but to the rest of the world as well.

Russia continues to threaten the West, and in particular the United States, with nuclear retaliation for actions taken to support Ukraine. Russian television — controlled by Putin — has said on its “Sixty Minutes” program (a Kremlin mouthpiece) that the U.S. could be destroyed with just four of Russia’s new “Sarmat 2” missiles. Last week, Medvedev said that if U.S.-supplied weapons were used to strike Russian territory, there would be retaliation against “decision-making centers.”

Putin’s power is still evident but he, too, must be suffering from “Ukraine fatigue.” Putin fired five top Russian generals (and one police colonel) last week in an attempt to reshuffle his military forces in order to carry on the invasion of Ukraine with more success than the fired generals have had.

When Putin dies, the war on Ukraine will not die with him. All members of his inner circle are believed to be very hard-liners, Patrushev in particular. His current job — secretary of Russia’s Security Council — has made him a key planner in Russia’s Ukraine invasion. He, like the rest of Putin’s key men, would continue the Ukraine war even if a power struggle between Putin’s confidantes turns violent.

The wild card in the deck is Alexi Navalny, the 46-year-old major political opponent to Putin who has been imprisoned on trumped-up charges. Navalny’s supporters are hard to measure in numbers and strength. A prolonged post-Putin power struggle isn’t likely to cause another Russian revolution, but Putin’s “Fab Five” will have to contend with public discontent with the Ukraine war in addition to trying to win it.

It’s impossible to predict how such a power struggle would turn out. The other four of Putin’s inner circle could align themselves with a safe choice such as Medvedev to calm the situation, but people such as Patrushev may be too ambitious to compromise.

Whether Putin lives for weeks, months, or years shouldn’t be our main concern. Weakening Russia is an objective we must pursue. Our goal in Ukraine should be for the Ukrainians to win outright or to turn Ukraine into another Afghanistan.

Remember that, though it took a decade to accomplish, our weapons shipments to the mujahideen led directly to the Russians’ retreat from Afghanistan defeated. Our support for Ukrainian forces could accomplish the same thing. It would cost us far less than a stronger Russia emerging victorious from Putin’s invasion.