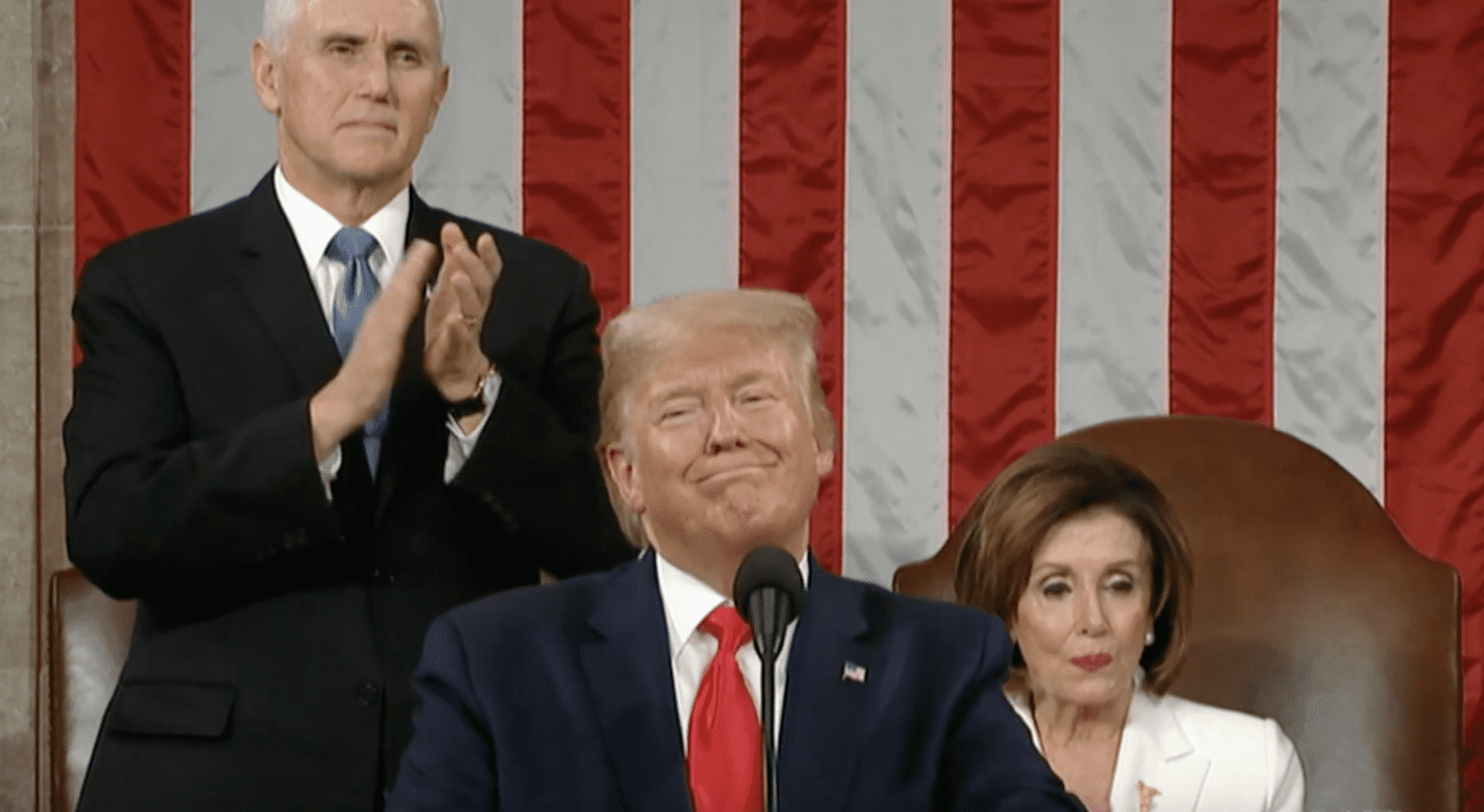 President Trump’s continued success in the face of unprecedented opposition from the Washington ruling class is obviously a source of considerable mystification for the Democrats, but the puzzle isn’t difficult to solve for any politician brave enough to look beyond the Beltway and observe what is happening in the day-to-day lives of ordinary Americans. The vast majority of the public can see that they are far better off now than they have been in a very long time. They are actually experiencing the genuine progress reported Tuesday by President Trump in the State of the Union address, as a new Gallup survey released Thursday confirms:

Nine in 10 Americans are satisfied with the way things are going in their personal life, a new high in Gallup’s four-decade trend. The latest figure bests the previous high of 88% recorded in 2003.… It’s likely no coincidence that Americans’ heightened satisfaction with their personal life comes as confidence in the U.S. economy and their personal finances are also at long-term or record highs.

Gallup goes on to point out that a huge percentage of all major demographic and political subgroups are content with the way their lives are going. Significantly, this includes Independents, 89 percent of whom declare themselves satisfied. In other words, most Americans are happy with the quality of their lives. As long as that continues, Democratic show trials in Congress, tearing up a copy of the SOTU speech, and gratuitous personal slander will have little downside effect on the president’s political fortunes. In fact, according to yet another Gallup poll released Tuesday, his approval rating has now hit an all-time high of 49 percent.

As if to underscore the futility of the Democrats’ attempt to oust President Trump, this new peak in his approval rating was reached during his Senate impeachment trial. In addition to a six-point increase in his approval numbers among Republicans, his rating among Independents rose by five points. Much of this improvement is, of course, due to the public’s view of how Trump is handling the economy. His approval rating on this metric is 63 percent. Combined with the satisfaction figures noted above, the voters will be reluctant to abandon Trump for any Democrat. As veteran Democratic consultant Mark Penn writes,

Like them or not, presidents uniquely represent the elected will of the people. As such, their removal is not just about the removal of a person but the overturning of that elected will. For that reason, there are few offenses that will be so grievous as to cause the party in power to give up their party’s leader and convict a president; most charges, even if true, won’t reach that high bar for removal.

The point here is that the president is the only federal official who must face all of the nation’s voters to be elected, and to remove him is a very grave matter. The House Democrats who impeached President Trump each face the voters of a single congressional district. Alexandria Ocasio-Cortez, for example, represents a district whose population is 712,053. Sen. Bernie Sanders, who voted in the Senate to convict the president, represents a state whose population is 623,989. It’s unlikely that the 63 million people who voted for Trump would have taken it well had these people managed to remove him from office over a phone call.

This is why Jonathan Turley, professor of public interest law at George Washington University, described the Trump impeachment thus: “I think this will go down as one of the greatest historic blunders of a House of Congress.” Turley, who is a Democrat, told the House Judiciary Committee that the articles of impeachment they had concocted were woefully inadequate. This was, he said, particularly true of the charge that Trump had obstructed Congress by invoking privileges used by every president since George Washington to protect the separation of powers. He described both articles as dangerous:

I am concerned about lowering impeachment standards to fit a paucity of evidence and an abundance of anger. If the House proceeds solely on the Ukrainian allegations, this impeachment would stand out among modern impeachments as the shortest proceeding, with the thinnest evidentiary record, and the narrowest grounds ever used to impeach a president.

Turley was right, of course. The resultant Senate trial disposed of the slapdash Democratic case with commendable alacrity, and the president is still living in the White House. All of this brings us back to the reason Trump keeps winning despite three years of unfounded accusations, illegal investigations, and abuse of power by the Democrats. Trump is the personification of prosperity and a proud proponent of American exceptionalism. That means he has the people behind him. They can see real improvements in their day-to-day lives, despite Democrats’ claims to the contrary, and that is why he keeps winning.