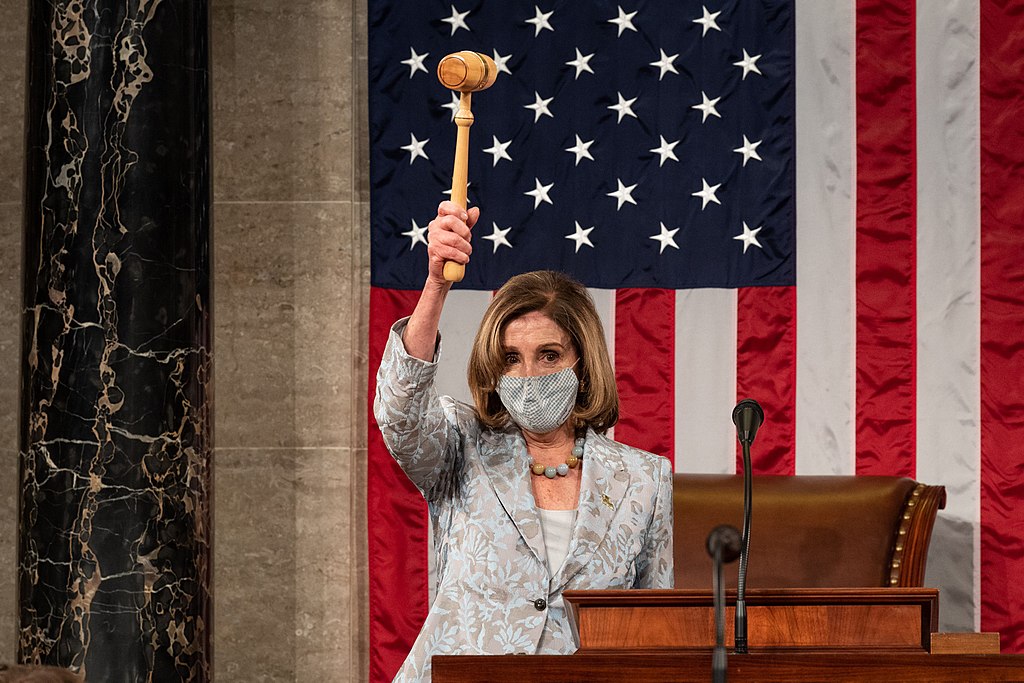 Frailty, thy name is politics.

Nancy Pelosi was so sure she had perfected the recipe to control the House forever and to tie up the GOP. It began with her first bogus impeachment of Trump during the halcyon days when no one ever before had heard of Zelensky or of Hunter Biden’s Burisma gambit. She tied up America for months and gained control of the 24/7 news cycle with her impeachment nonsense and abuse, reinforced by public liar Adam Schiff and Low Life Jerrold Nadler. Ultimately, the House voted to indict (“impeach”), and the Senate rapidly threw it all out — although Mitt Romney got his chance to avenge his jealousy that Trump successfully got elected in 2016 while Romney got beaten by Candy Crowley in 2012.

It was a Christmas Season Impeachment, and Pelosi liked it so much that she disseminated souvenir pens. In fact, it played so well for her that she repeated her anti-Trump Christmas Impeachment Passion Play the following December. By now, Trump was departing from office, but she proceeded anyway to impeach him a second time even though he was, shall we say, unimpeachable. Again, she got her Democrat House to vote to indict. Again, the Senate threw it out. And again Romney voted with the Democrats to convict.

But what next for Pelosi? With Trump out of office, how continue the annual impeachment game? She decided on a January 6 committee to investigate whether Trump had instigated an insurrection. She had two purposes:

To give her January 6 committee the appearance of bipartisan legitimacy, Pelosi hand-picked Republican House representatives to sit with her hatchet wielders. So, after rejecting Kevin McCarthy’s selection of the likes of Jim Jordan, she appointed Never Trump fanatics Liz Cheney and some guy in Chicago named Kinzinger. Kinzinger is toast and won’t be back next term. Cheney is more interesting. It is family. It is blood. It is genetic.

Never underestimate the role of family in guiding politicians. They are human beings. Liz’s father, Dick Cheney, was very close to the Bush family. He served under the father as Secretary of Defense and under the son as Vice President. He liked them so much that he never shot either during a hunt. Alas, Trump ripped the Bushes. He criticized the two Georges for so many of their RINO policies, and he especially launched into Jeb! because, well, Jeb! was running against him. And, honestly, Jeb! really did manifest low energy.

So, it is personal. Trump laid into the Bushes, and Liz is there to avenge just as George Dubya 43 was there to avenge Saddam Hussein’s effort to assassinate George H.W. 41. Trump proved a Republican could win the industrial White ethnic blue-collar Midwest vote, a feat Romney could not attain, so Romney is jealous, too. That’s how it goes. Personal.

Nevertheless, Pelosi failed to anticipate three factors that would cause Americans to lose interest in her bogus January 6 committee:

1. January 6 happened a year and a half ago. Old news, like barbary pirates and Roman legions. No one cares about pirates these days — except for those following the Johnny Depp–Amber Heard trial.

2. Maybe some political junkies still would have fixated on January 6 if there actually had been an insurrection. But everyone knows there was no insurrection. There was a kid dressed like a caveman. Another fellow dressed like an elk. Look at the Russia-Ukraine mess. Any of them dressed like Hanna-Barbera characters? Or watch Ken Burns’s fabulous documentary on the Civil War. Did Stonewall Jackson come dressed like an elk? By contrast, every sane American knows that January 6 was an angry assemblage that got out of control. Trump explicitly urged the demonstrators to act peacefully and lawfully. It is on video record. Even now, people being convicted are getting 30-day or six-month-type sentences, not the kinds of life imprisonments or death penalties meted to insurrectionists. Many Americans, even those on the Left, personally know people and have friends or family who were there that day in D.C. to protest a stolen election. Demonstrators were there to voice anger over a corrupt presidential election stained by ballot harvesting, by Twitter and Facebook suppressing news of the Hunter Biden laptop, by the abrupt cancellation of the second of the three scheduled debates, and by a biased moderator “pulling a Candy Crowley” by interjecting his unsolicited and absolutely incorrect view that the Hunter Biden laptop was an irrelevant diversion. Well, it sure is relevant today, nearly two years later. So no one serious really perceives that January 6 was an “insurrection” rather than a demonstration that got out of hand.

3. Pelosi failed to anticipate what I call the “DREAMERS” factor:

(a) Defunding the police: the massive national effort by Democrats and their Soros-supported DAs to end bail, to downgrade felony prosecutions to misdemeanors, to release prisoners, and to defund police departments. With police under attack and morale destroyed, we now are living through the worst surges in violent crime and murder in decades. Before Biden, who even heard the term “Smash and Grab”?

(b) Race: Americans are disgusted with Critical Race Theory and the “1619” lies being spoon-fed to the public. Is there “Systemic Racism”? “White Privilege”? The average independent White voter knows he or she is not a racist and has struggled for whatever job opportunities, promotions, and benefits achieved. People do not need to prove their bona fides to Nancy Pelosi. They hated being called a “basketful of deplorables,” and they hate the new iteration.

(c) Education: Parents do not want their first-, second-, and third-graders being taught about transgenderism and sex-change surgery — or about non-binary genderism at all. They don’t want their kids sacrificed to Woke Math and 1619 history. And they sure don’t want to be tagged by Joe Biden’s attorney general as “Domestic Terrorists” just because they are fulfilling their duties as responsible parents. Consider the recent Virginia elections that saw voters turn out Democrats and elect a Republican governor, lieutenant governor, and attorney general.

(d) Afghanistan. Biden’s entire foreign policy is a disaster. His evacuation from Afghanistan killed 13 military heroes. North Korea has resumed nuclear-arms testing. China has his number. Had he acted promptly and permitted Poland to send Ukraine the MiG 29’s that Warsaw offered, we might not now be sending $40 billion to Ukraine to help them catch up. He has completely messed up the Abraham Accords, and several of the Arab co-signers refuse even to accept his phone calls. And his outreach to Iran…

(e) Mexico border. What to say? Trump had secured the border, and now illegal immigration registers numbers never before seen. One million Illegals? Two million? Where does it end? Biden puts them on planes secretly in the middle of the night, flying them to bolster voter replacement to turn red districts blue, as it has done to California, which once gave us Reagan and Nixon but now gives us Newsom and Kamala.

(f) Energy. He has canceled leases for exploring for oil and gas. He closed off ANWR. Canceled the Keystone XL Pipeline. Incorporated in his executive orders his determination to take down the fossil-fuels industries to make place for the exorbitantly higher-cost “Green Energy” that excites his radical-left base. Gasoline prices never have been higher. Home heating bills. And indeed everything’s prices have gone through the roof because everything depends on energy costs: from operating machinery to trucking goods.

(h) Shortages. Parents cannot obtain baby formula in the United States? Really? Not enough supplies of Similac or Enfamil? Bernie Sanders praised the bread lines he saw when he honeymooned in the Soviet Union. But who else likes that? Is that America? Moreover, to add insult to injury, he ships palettes of baby formula to Illegals at the border? Really?

So you take Biden’s and Pelosi’s “DREAMERS” government, with its record-high 8.3 percent inflation and with home mortgage rates now at 5.3 percent, double what they were a year ago — with many food staples’ prices now inflated even into twenty percent — and, really, who except for Pelosi, Cheney, and the Woke media care at all about January 6?

Pelosi thought her January 6 committee would ride her to an election landslide in November 2022. Well, with her obstinate focus there, it sure will.