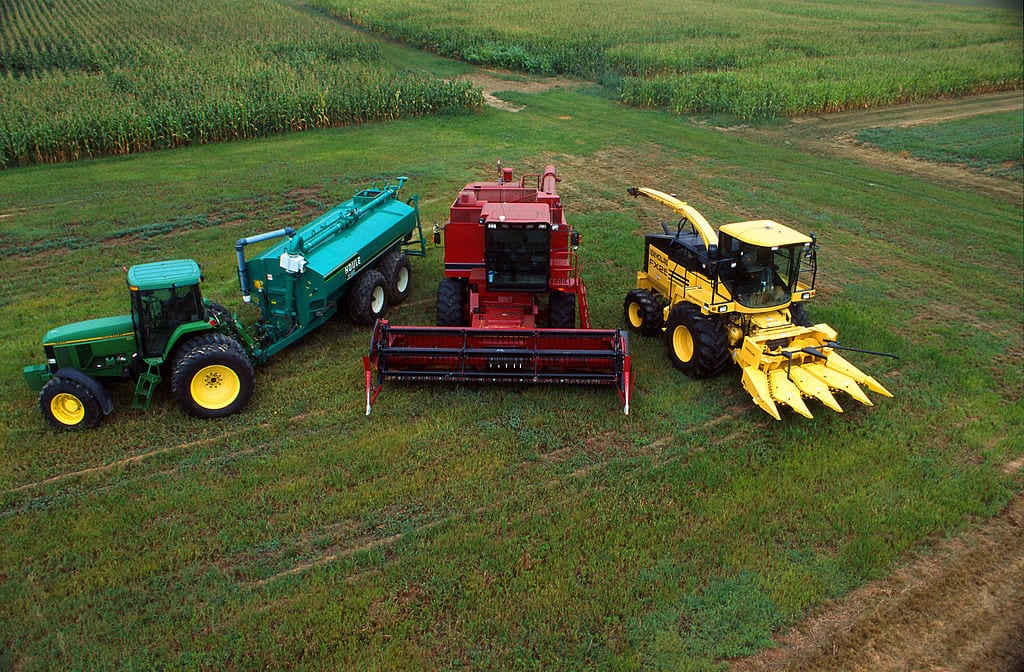 Are businesses and people in our state ready to make the jump from an economy that is heavily dependent on fossil fuels to one that would “meet 100 percent of power demand in the United States through clean, renewable, and zero-emission energy” over the next ten years?

Let’s start with Missouri farmers. Are they ready to switch to electric tractors, trucks, and combines in order to reduce their carbon footprint to the vanishing point over the course of a single decade?

We can answer that question with an unequivocal “No.” Here’s why.

Begin with the fact that there are no — repeat, no — Tesla-like, battery-powered farm vehicles on the market today that could begin to replace most of today’s diesel-powered vehicles in doing the heavy-duty, energy-intensive work involved in ploughing fields and gathering harvests. The battery-powered substitutes for today’s machines don’t exist, and — even if they did — other problems would prevent their instant and widespread use.

Did any of the utopian thinkers who devised the Green New Deal stop to consider that most farms are wired in much the same way as most homes. That is to say, they are not wired for industrial use — which is what would be required to bring about the presumed greening of agriculture through electrification.

The problem here cannot be solved by putting up hundreds or even thousands of new wind turbines to supplement the 500 now in use in Missouri — which provide an average of two megawatts of power per turbine, and then only when the wind blows.

As Blake Hurst, the president of the Missouri Farm Bureau, points out, the electrification of Missouri agriculture would be an immensely expensive undertaking. It would require nothing less than “totally rebuilding the electrical grid” in order to deliver far greater quantities of electric power to farms in thinly populated areas around the state. The grid, along with charging stations and other supporting infrastructure, would have to treat every farm with a fleet of one truck, one tractor, and one combine or cotton-picker as if it were a town with 10,000 or more inhabitants.

To understand the physics, consider a conservative estimate of the electrical requirements posed by a hypothetical electric combine that replaces a typical grain combine. The latter weighs 15 tons, consumes approximately 15 gallons of diesel fuel per hour, and is often used about 16 hours a day during harvest. At 40-percent efficiency, its diesel engine delivers about 244 kW of power.

To do the same work, the electric combine would need to carry the equivalent of about 3.5 Tesla batteries (4,400 pounds) for each hour of continuous use. It would therefore need approximately 28 Tesla batteries to go eight hours without recharging. The combined weight of all of batteries would be 17 tons, making the electric combine significantly heavier than the piston-driven combine. While battery technologies are improving, it will be some time before any dramatic changes in energy to weight are likely to take place.

Since recharge time has to be short for economic reasons (a farmer racing against time to bring in a harvest can’t afford to spend several hours a day twiddling his thumbs), suppose that the electric combine “fast charges” in 20 minutes, an optimal time suggested for electric cars. The charging station and related infrastructure (i.e., generation and power distribution) would have to be capable of supplying in the vicinity of six megawatts of power during the recharge period! Let us pause to consider what that means.

Recharging a single combine requires the same power output as three of today’s wind turbines. According to government data, 1 megawatt of power capacity will supply 750 homes. Looked at in this way, the infrastructure necessary to recharge just one electric combine in 20 minutes would also be capable of supplying electrical power to the equivalent of 4,500 homes.

Suffice it to say: If you multiply that one combine by the total number of big combines and other heavy-duty vehicles used on Missouri farms today, you arrive at a very big number.

Even if we, as a state, were prepared to pay the huge costs of participating in a federal government-led crash effort to transition from diesel-powered to battery-powered farming, it is doubtful that our farmers would thank us. Apart from the inevitable adjustment problems in the introduction of new equipment, the electric combines, tractors, etc. would be more likely to bog down in muddy fields because of the extra weight of carrying a multitude of Tesla-like battery packs. And that’s not all. Barry Bean, a large cotton grower in the Bootheel in southeastern Missouri, shudders at the thought of the long lines of farmers with their tractors and cotton-pickers at charging stations at the end of a long day: “We all work the same hours and we’d all be coming in at the same time.”

Let us turn then to freight transportation, another area important to Missouri as a crossroads between East and West, North and South. If, in the year 2030, all of the heavy trucks passing through Missouri were battery-powered, what would it take to charge them? We could not answer that question without a good deal more research. But we can say what it would take to open a single recharging station to handle a tiny fraction of the heavy-truck traffic that flows through the little village of Kingdom City, lying at the intersection of Interstate 70 and U.S. Route 54, on a daily basis.

Using the same analysis as above, to support a single service station at this site capable a) of recharging a Class 8 truck in 20 minutes that has been on the road for eight hours, and b) of handling 10 such trucks simultaneously, we have estimated that the supporting electric infrastructure must be capable of supplying close to 40 megawatts. That is the equivalent of about 20 2-megawatt windmills just to serve one refueling station. That same infrastructure would serve the needs of about 30,000 homes, or a decent-sized town.

All this brings us to a final consideration. Where does Missouri’s electrical power come from? According to the U.S. Energy Information Administration, we get more than three-quarters of Missouri’s net electrical generation from burning coal, and another five percent from natural gas-fired plants. Oh, yes, our one nuclear power plant in Callaway County is good for another 10 percent, not that the Green New Deal manifesto is calling for more nuclear power.

Even in the act of saying “sayonara” to the use of fossil fuel in just two sectors of the state’s economy — agriculture and freight transportation — we would have to fall back on fossil fuels to provide additional electrical generating capacity.

Andrew Wilson, a longtime contributor to The American Spectator, is senior writer at the Show-Me Institute. James Seeser, who earned a PhD in physics from the University of Missouri at Columbia in 1970, is a longtime supporter of free markets.