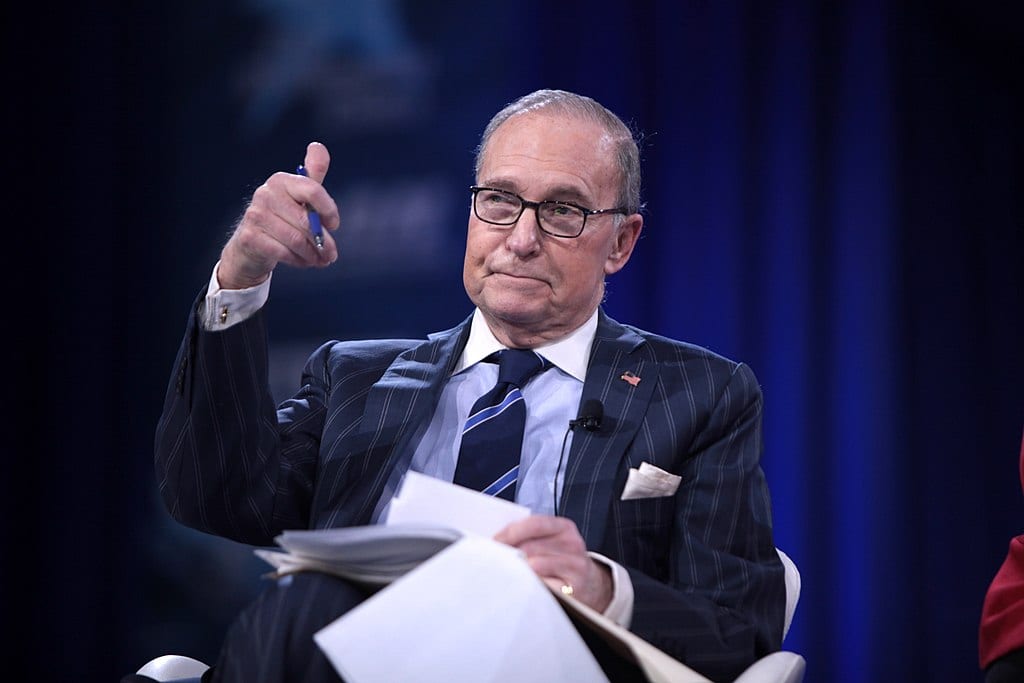 The markets are on edge. Yet, then again, inflation is low, employment is high — in the case of blacks and Latinos historically high — and growth is healthy and looking to become very healthy. Dare we say it, robust? The reason for the edginess in the markets is that President Donald Trump has imposed tariffs on Communist China and threatens to impose still more tariffs. There is talk of a trade war. That should worry any champion of free markets.

So we welcome the appearance in Washington of Larry Kudlow. He is a free market champion to the utmost and he has been brought to Washington by the imposer of tariffs, President Trump. Now President Trump seems to incline toward the Chaos Theory of government. He often employs people who do not completely agree with one another. Kudlow is for free trade. Another White House aide, Peter Navarro, is not.

President Trump’s opponents disdain him for this, but as I recall Ronald Reagan also practiced the Chaos Theory from time to time — remember if you will his strategy to end the Cold War. When he traveled to Reykjavik to negotiate arms with Soviet leader Mikhail Gorbachev, practically everyone on Reagan’s staff was an advocate of conventional arms control except the President. When things did not go Reagan’s way he took a walk. Actually, the Chaos Theory was employed first by none other than Franklin D. Roosevelt. Back in Roosevelt’s day those who now chide President Trump for being a Chaos kind-of-guy would have been praising Chaos to the heavens. Recall if you will Arthur M. Schlesinger, Jr.’s The Age of Roosevelt or Robert Sherwood, another renowned Roosevelt court historian. Chaos has its uses.

Kudlow is President Trump’s director of the National Economic Council. He is also a supply-sider, a believer in low taxes, and a rational man. He blames the Chinese for stirring up talk of a trade war and he is counseling a wait-and-see policy. Wait and see if the author of The Art of the Deal is in the first stages of making a deal or of waging a trade war. We are all counting on President Trump, the entrepreneur, to realize that in a trade war there are no winners.

Yet Kudlow’s reasonable case for withholding judgment and his free market credentials were not enough to temper another free marketer, Neil Cavuto, who said on Fox News that, “This doesn’t sound like the same laissez-faire, hands-off, Larry Kudlow I’ve respected and admired all these years.” Well, hold on Cavuto. All Larry is saying is give Donald a chance.

I side with my friend Seth Lipsky who in the pages of the New York Sun went so far as to write: “History teaches there’s a fine line between reasonable protection and catastrophe. If that puts a premium on discretion, it seems to us that Mr. Trump has as much claim to that discretion as any president, and more than many, in that he took the tariff question to the voters and won a mandate. Mr. Kudlow is arguing that the tariffs imposed so far are the start of a process and a negotiation the goal of which, at least for our side, is a lower barrier, freer trade, and faster growth.”

Kudlow is for American conservatives a well-known quantity. He has been leading the free marketers since the days of Reagan. He is pro-growth and has been for decades. He will have to contend with Navarro, the director of the White House National Trade Council. Navarro is no free marketer. Let the better man win and let negotiations begin.