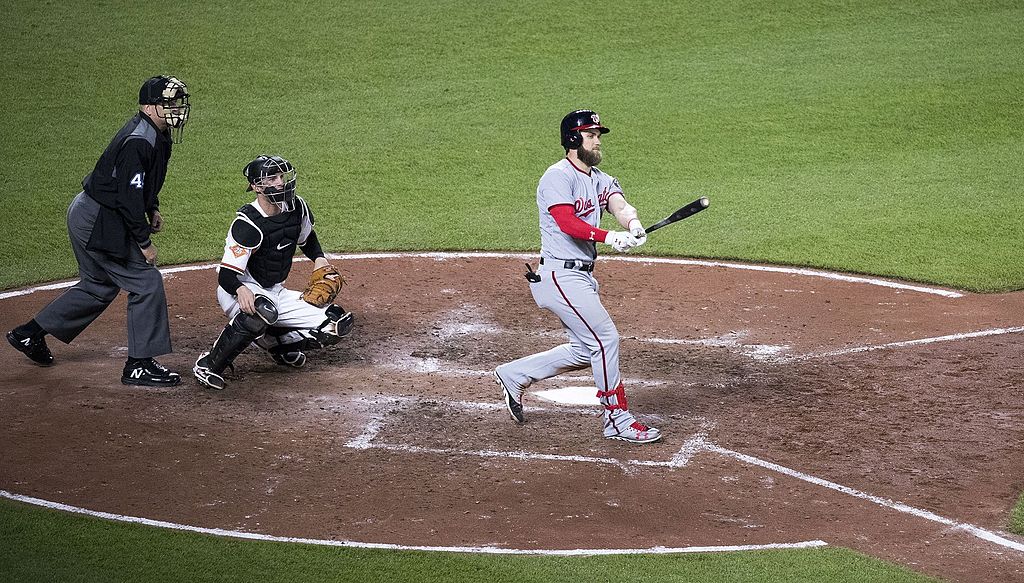 It’s done now and the Big Questions have been answered, chief among them being would Scott Boras, Bryce Harper’s pit bull agent, allow young Bryce to sign a contract before the All-Star Game ballots were printed.

The other BQ was how much is a .249-hitting free agent worth in the grotesquely overpriced MLB talent market. The Philadelphia Phillies answered with a third of a billion dollars over 13 years (THIRTEEN YEARS!), which will leave Bryce taking his hacks in Philly, with a salt and pepper beard, at age 39, when I’ll be, well, we needn’t go into that. If I’m to watch Bryce’s final games — and not many may want to — I’ll likely have to rely on Heaven having a good cable package. The contract is so long it might even expire after the Mueller probe is complete. (I said might.)

As gaudy as Harper’s $330 million deal is, it could have been worse. Phillies GM Matt Klentak and hobby owner John Middleton at least had enough discipline to turn down Boras’s first tender which called for all the property east of the Mississippi, a cash amount equal to two-thirds of the national debt, and a signing bonus equal to Jeff Bezos’s divorce settlement. Boras isn’t just a bear — he’s a Grizzly. He has more brass than the Acme Spittoon Co.

Bryce Harper was born and still lives in Las Vegas. But it’s the Phillies who are taking an eye-popping gamble. Signing any player, including a young Babe Ruth, for 13 years would be a roll of the dice with a very good chance of coming up craps somewhere along the long line. Young Bryce — he’s 26 — is indeed a talented ballplayer, a solid defender with power to burn at the plate. But he’s notoriously hot and cold and sometimes injured. In the past four seasons he’s bookended a .330 and a .319 season with a .243 and a .249 season.

So which Bryce will show up at Citizens Bank Park in Philadelphia in 2019? Way too soon to tell, as Bryce has yet to even take a spring game hack in a Phillies uniform. But Phillies fans — who have a rep as some of the toughest on the planet — will let us, and Bryce, know as soon as the evidence starts coming in.

I can’t remember who I first heard say it. Maybe it was Bob Uecker. Maybe it was much further back when Dizzy Dean was calling the Game of the Week and the world and I were young. But the charge was the Phillies fans “would boo your kid at an Easter egg hunt.” Quoting from memory, I once heard Tito Francona, who managed the Phillies before moving on to the Red Sox and then the Clevelands, say to a sportscaster: “Your last name is on the back of your uniform. But when I walked onto the field in Philadelphia I felt like my first and middle names were ‘You suck!’”

And it’s not just the Phillies. Sports fans of a certain age are familiar with the December day when Eagles fans booed and pelted Santa Claus with snowballs during a halftime Christmas celebration. In their defense, Eagles fans will claim, based on their team’s performance that season and a bunch of other seasons, they were provoked. But Santa Claus? Pre-Miranda doesn’t quite cover this.

These melancholy events are well in the past. Perhaps Philadelphia puts up a kinder, gentler generation of sports fans nowadays. Or not. If things don’t start off well, Bryce will be the first to know. An acute case of buyer’s remorse coursing through Citizen’s Bank Park faster than the wave would not be a pretty sight. But if Bryce starts 2019 like he did 2015, joy will be unconfined among Phillies fans, who are pumped up at the prospect of a Bryce Harper at the top of his considerable game.

I hold no brief for the Phillies. I still would prefer to see the good Harper over the slumping Harper just because the Harper A-game is a lot of fun to watch. If this is what the Phillies have bought with the operatic amount of money they are sending Harper’s way until near the end of time, they may well be the team to beat in the NL East for a while to come. They had already improved the team before signing Harper, picking up several very talented gents, not the least being J. T. Realmuto. (Picture it — a good defensive catcher who can both hit and run. What a concept.) The Braves and the now Bryce-less Nationals have plenty of talent. But if the Phillies 25, including Harper, have the years they’re capable of, they will be hard to keep up with.