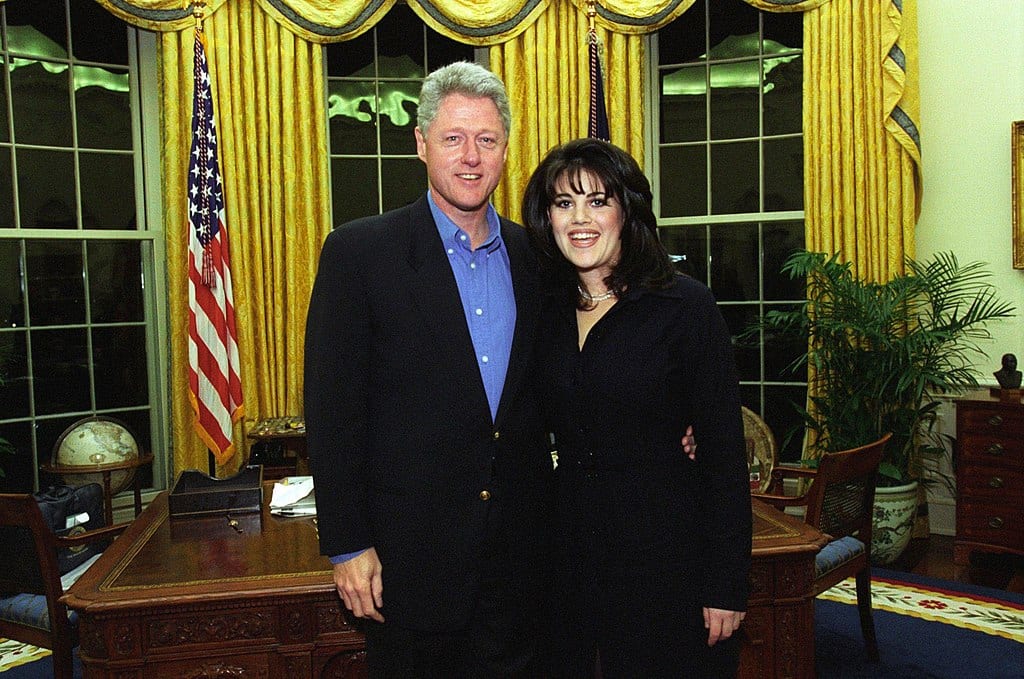 President Donald Trump has been relying on well-timed tweets to counter developments in the House impeachment inquiry. Perhaps Trump should follow the approach of the 42nd president to overshadow events on Capitol Hill.

The full release of the Hollywood film Wag the Dog occurred on January 9, 1998, several days before the American public learned that President Bill Clinton had been carrying on a sexual affair with White House intern Monica Lewinsky. Starring Robert De Niro and Dustin Hoffman, Wag the Dog was the story of a presidential sex scandal that was certain to derail the president’s reelection. A White House dirty trickster, played by De Niro, and a sympathetic Hollywood producer, Hoffman’s character, concocted a story of a fake war in Albania. The plan was to distract public attention from the president’s sex scandal by drawing interest to the war, in which American lives were at risk.

Furious with the White House at claiming a nonexistent war existed, the CIA leaked that the war was over quickly. Fearful this would allow the president’s sex scandal to return to front-page news, De Niro’s and Hoffman’s characters let it be known that a U.S. serviceman was trapped behind enemy lines and American forces needed to stage a rescue. Sadly, the trapped serviceman died in action and was given a hero’s burial at Arlington National Cemetery. U.S. patriotism was at a fever pitch, and public approval of the president skyrocketed.

The plan worked. The public’s attention was distracted from the sex scandal, and the president was safely reelected. Months later, that exact same scenario played out for real.

The investigation into Clinton’s sexual affair with Lewinsky was getting worse by the day for the president. His emphatic denials were learned to be outright lies. It was learned he encouraged Lewinsky and others to lie. The final nail in Clinton’s coffin occurred when Lewinsky turned over to federal investigators her semen-stained blue dress. Testing proved the DNA belonged to Clinton. The president could no longer lie his way out of his difficulties.

As the evidence mounted, Clinton faced a world of hurt. In trying to cover up his extramarital affair, the 42nd president committed perjury and obstructed justice. These were the same allegations Richard Nixon faced when House leaders made it clear in 1974 that they were likely to impeach him.

Desperate times call for desperate measures, and Clinton had his own wag-the-dog moment. On the same day Monica Lewinsky was to testify before the grand jury regarding Clinton’s attempts to suborn perjury, Clinton ordered strikes against the Al-Shifa pharmaceutical factory in Khartoum, Sudan. Clinton claimed the medicine plant was producing chemical weapons for Osama bin Laden and that there were financial ties between the plant and the Al-Qaeda leader. Neither Clinton claim was true.

In fact, numerous Americans and Europeans who were working at or were familiar with the factory reported that it indeed produced medicines that were desperately needed in the region. Moreover, the plant did not have any of the easily observable characteristics of a chemical weapons factory, such as air-sealed doors, which are necessary when producing poisons. Nor were there Sudanese soldiers guarding the plant, as would be expected if it were engaged in the production of chemical weapons. The German ambassador to Sudan said the Clinton administration’s claims of poisonous gas production at the medicine factory were a lie.

Clinton’s claimed reason for the strikes fell under further suspicion when it was learned that only he and a small handful of advisers made the decision. In a departure from protocol, most of the military joint chiefs of staff were kept in the dark until just before the strikes began.

After the strikes, the administration refused to offer any proof to buttress Clinton’s claims that the factory was producing chemical weapons, as had become routine for presidents since the days of President Ronald Reagan. In addition, the Clinton administration refused the Sudanese government’s request for international inspection of the destroyed plant to ascertain if it was producing poison gas, as Clinton had alleged.

The Sudanese owner of the plant said his factory employed 300 workers who manufactured mostly antibiotics. Al-Shifa supplied 60 percent of the pharmaceuticals that were critically needed in Sudan. The owner welcomed American officials to inspect the plant anytime they wanted, but they never asked.

After the strikes, reporters interviewed factory workers and locals while aid workers were sifting through the rubble. American and foreign news reported that medicine vials were found strewn among the wreckage. There was absolutely no evidence of chemical weapons or chemical weapons production at the medicine factory.

The evidence undermining Clinton’s claims forced the administration to finally come clean. Defense Secretary William Cohen admitted there were no direct ties to Osama bin Laden. He also claimed defense officials were not aware the factory produced medicine, which is interesting, as that was what the Al-Shifa factory was known for in Sudan. As Sudanese officials suggested, the United States could have merely asked for an inspection of the plant to ascertain its purpose. It would have been impossible to hide any evidence of chemical weapons production, hide the munitions, and reconfigure the operation of the plant without being observed by U.S. satellites. The Clinton administration never asked to inspect the plant.

As in the Wag the Dog movie, Clinton had his own act two. In fall 1998, the independent special counsel delivered his report on the Clinton investigation. It was damning. House Republicans felt they had no choice but to consider impeachment because Clinton had committed perjury and obstructed justice.

On December 16, 1998, the eve of the impeachment debate in the House, Clinton once again put servicemen and women in harm’s way. Clinton ordered U.S. airstrikes against Iraq. In a public announcement, Clinton stated, “Their mission is to attack Iraq’s nuclear, chemical, and biological weapons programs and its military capacity to threaten its neighbors.”

Clinton claimed the timing of the strikes was appropriate because Iraqi President Saddam Hussein announced “six weeks” earlier that he would no longer cooperate with United Nations inspection missions. But Clinton’s timeline was patently false. Saddam announced four and a half months earlier, on August 5, that he would no longer cooperate in inspections. Any doubt as to the motive behind the ordered strikes evaporated when Clinton called them off minutes after the impeachment vote was concluded.

Mark Hyman is the Emmy award-winning national investigative journalist for Sinclair Broadcast Group. This essay was adapted from his just-released book Washington Babylon: From George Washington to Donald Trump, Scandals that Rocked the Nation. Read previous excerpts published in The American Spectator.