A Further Perspective,Top Story 2020 Presidential Race,Bill Clinton,Hillary Clinton,Joe Biden,Vladimir Putin The Clintons’ Wheeling and Dealing - The American Spectator | USA News and Politics
Menu
A Further Perspective
The Clintons’ Wheeling and Dealing
Bill and Hillary have their own shady history in Ukraine.
by Mark Hyman
Evan El-Amin/Shutterstock.com 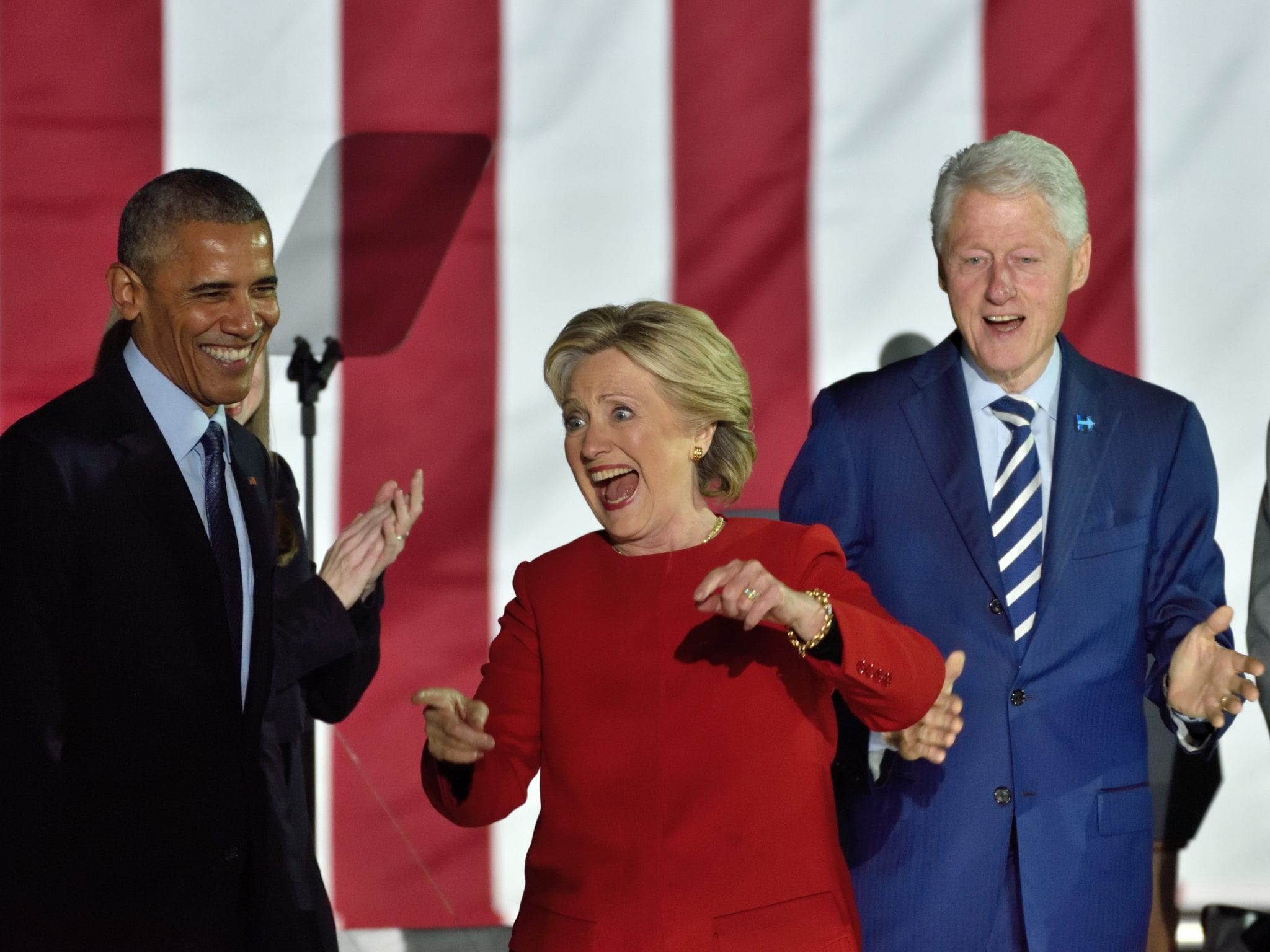 Presidential candidate Joe Biden’s use of the power of the White House when he was vice president to aid his son Hunter in his questionable business deals in Ukraine is back in the news. The Bidens were not the only family of a senior Obama administration official to use the federal government to benefit family business dealings.

In June 2010, the Russian State Atomic Nuclear Agency (Rosatom) announced its purchase of 51 percent of Uranium One. Some of the holdings of Uranium One were U.S. uranium mines, a strategic asset that required U.S. government scrutiny. The Atomic Energy Act of 1954 mandated that the U.S. Nuclear Regulatory Commission make a determination if a license transfer was in the security interest of the United States.

After the purchase of the remaining 49 percent of the stock was announced in January 2013, Rosatom chief executive officer Sergei Kiriyenko told Russian President Vladimir Putin, “Few could have imagined in the past that we would own 20 percent of U.S. [uranium] reserves.”

The 2010 sale of the controlling interest in one-fifth of U.S. uranium mines to Russia had its origin several years earlier. In 2004, a pair of Canadians, Frank Giustra and Ian Telfer, partnered to create Canadian uranium mining company UrAsia Energy Limited. Giustra was the founder and chief executive of movie studio Lionsgate Entertainment before he made the switch to running an investment firm and then becoming a mining tycoon. Telfer had partnered with Giustra on several other investment deals.

UrAsia was a very rare uranium mining company in that it did not own any uranium mines, nor did it have any experience in uranium mining. What UrAsia founder Giustra did have, however, was a former U.S. president as a loyal and valuable benefactor. In September 2005, Bill Clinton flew to the Kazakhstan capital of Almaty with Giustra aboard the would-be mining executive’s private MD-87 jet, a converted commercial jetliner.

Upon arrival, the pair had a banquet with Kazakhstan President Nursultan Nazarbayev. At the event, Clinton offered high praise and endorsed Nazarbayev’s bid to head an international democracy organization. Days later, Giustra was given the right to purchase three government-owned uranium mines.

It is well established that big business deals occur in Kazakhstan only with government approval. Moreover, a strategic asset, such as uranium, would not land in the hands of a startup shell company over bigger, established mining companies with impeccable reputations of success unless Nazarbayev personally approved the deal.

Nazarbayev, who held the presidency from 1990 until his abrupt resignation earlier this year, was routinely reelected with nearly 100 percent of the vote. He ruled as an iron-fisted despot. Even his opponents claim they voted for him. He was a Socialist Party official before the breakup of the Soviet Union. His regime is guilty of rampant human rights abuses, including the jailing of regime critics. Nazarbayev may have resigned from the presidency, but because he heads the ruling party he is still the de facto ruler of Kazakhstan.

That a former U.S. president would publicly praise Nazarbayev was shocking. Clinton’s glowing remarks contradicted the official U.S. narrative of the Kazakhstan despot. The United States had maintained cool-at-best relations with Kazakhstan since it became apparent the country was democratic in name only.

Reportedly, before Clinton and Giustra flew to Almaty to close the deal with the Kazakh dictator, there was some backroom dealing going on. Sen. Hillary Clinton had lobbied Kazakh Prime Minister Karim Massimov to approve UrAsia’s mine purchase or risk the consequences.

In February 2007, South African mining company SXR Uranium One and UrAsia Energy Limited struck a deal to merge and become a $5 billion company. The merged company would become the world’s second-largest publicly traded uranium mining company. Two months later, the deal was completed, with UrAsia owning 60 percent of the new company. In less than three years, Giustra and Telfer’s UrAsia went from a shell company to a global uranium-mining conglomerate.

Uranium One experienced a bumpy road in the early going. In 2009, only two years after the merger, Uranium One found itself in a precarious situation with the Kazakhstan government. There was concern the mining company might be taken over by the former Soviet republic as fallout from a corruption investigation of Giustra business associate, Moukhtar Dzhakishev. Clinton, Giustra, and Dzhakishev had been wheeling and dealing together for at least a couple of years.

Dzhakishev was a Kazakhstan official who was there when Clinton and Giustra flew into Almaty in 2005. It was Dzhakishev who coordinated the UrAsia purchase of the three Kazakh mines. In early 2007, Dzhakishev flew to the United States and met with Giustra and Clinton at the former president’s Chappaqua, New York, home to discuss business issues in which the Kazakhstan government needed U.S. government support.

By 2009, Dzhakishev had fallen out of favor with the Kazakhstan government amid corruption allegations. Concerned over the possibility of a Kazakh government takeover, Uranium One officials met with U.S. Embassy staff in the Kazakhstan capital city and requested U.S. officials intercede on behalf of the Canadian company. Amazingly, they did just that. At this time, Hillary Clinton was the U.S. Secretary of State. The State Department acted on behalf of a Canadian company in the midst of a conflict with the Kazakh government. About the same time, Uranium One Chairman Ian Telfer made a $1 million contribution to the Clinton Foundation.

In June 2010, Rosatom proposed purchasing a majority share in Uranium One, thereby triggering a review by the Committee for Foreign Investment in the United States. The very same month, Bill Clinton was offered a $500,000 speaking fee by Renaissance Capital, an investment bank with Kremlin ties that was selling Uranium One stock.

Clinton’s previous Moscow speech was five years earlier for less than $200,000. In 2005, when Bill Clinton last gave a speech in Moscow, Hillary Clinton was only one of a hundred U.S. senators. In 2010, she was the sole U.S. secretary of state. The Uranium One–Rosatom deal received Committee for Foreign Investment approval, and the purchase was completed in December 2010.

All totaled, Giustra, Telfer, and several other individuals who profited from the various UrAsia, Uranium One, and Rosatom deals gave about $145 million to the Clinton Foundation. None of these donations were disclosed by the Clinton Foundation as Hillary had promised in the 2008 memorandum of understanding she had signed.

In giving its blessing for the deal, the Nuclear Regulatory Commission promised neither Rosatom nor any of its subsidiaries would be given a license to export uranium from the U.S. mines to a foreign country. After the purchase was approved, some regulatory sleight-of-hand took place. The NRC secretly modified an existing license by a third party to transport abroad U.S. uranium on behalf of Rosatom.

This essay is adapted from Washington Babylon: From George Washington to Donald Trump, Scandals That Rocked the Nation, by Mark Hyman, foreword by R. Emmett Tyrrell, Jr. Available online now and on sale in stores on October 22, 2019. Read previous excerpts published in The American Spectator.