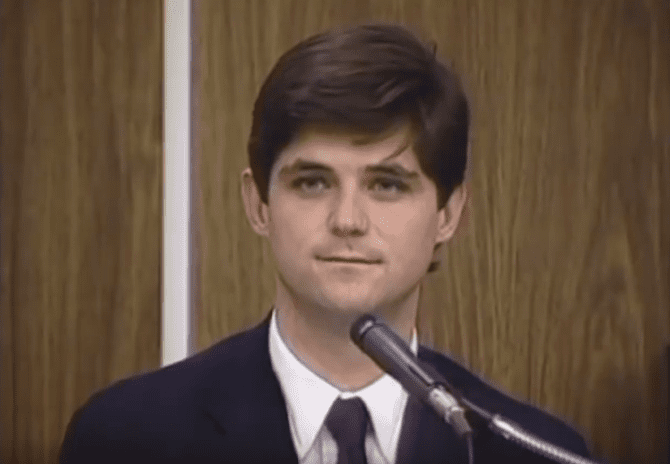 The New York Times has gone on the offensive against Brett Kavanaugh nearly a year after he was confirmed as a Supreme Court justice. It may want its readers to believe it is protecting the interest of an alleged sexual assault victim. Three decades ago, however, the Times and other media outlets were less concerned with the plight of an alleged rape victim probably because of the identity of the alleged attacker.

It was boys’ night out on Good Friday, March 29, 1991, in Palm Beach, Florida, for the Kennedys. Thirty-year-old William Kennedy Smith was out drinking, carousing, and meeting women with his 24-year-old cousin, Patrick Kennedy, a Rhode Island state legislator, and his 59-year-old uncle and U.S. Senator Edward “Ted” Kennedy.

The three were at a local nightclub drinking and chatting up the girls. Smith met 29-year-old Patricia Bowman, and the two talked and danced until the nightclub closed. Smith asked Bowman if she would drive him home, as his uncle and cousin had left without him. Once they arrived at the guarded Kennedy compound, Smith offered to give her a tour of the mansion. At this point, Smith’s and Bowman’s versions of what happened next differ.

Smith claimed the pair engaged in consensual sex. Bowman claims she was attacked and savagely raped. She reported the sexual assault to the Palm Beach police hours later.

After about a week of rumors and media inquiries, Palm Beach police finally confirmed that Ted Kennedy’s nephew had been accused of rape. The police also admitted they had not yet interviewed any of the Kennedy family regarding the allegations. All three Kennedys left the area hours after the alleged rape.

Once the Kennedy name had been released, this created a media frenzy not previously seen. The incident became the subject of tabloid newspapers and tabloid TV shows. The alleged rape was a staple of CNN programming, the only 24-hour national news channel at the time.

Overwhelmed by the resulting media circus that brought 300 journalists to the Palm Beach area, Bowman’s family hired local attorney David Roth to protect her interests and to navigate her way through the investigation. Roth was invited to make media appearances on behalf of his client. Among the first programs he visited was CNN’s Larry King Live on April 9, 1991. Roth found himself in the crosshairs of a hostile interview. “Why does the victim of a crime need a lawyer?” was the first question King asked. He continued, “Victims usually testify and either the accused is found guilty or not guilty.”

King then explained to viewers the Kennedy family had experienced so much tragedy over the years and that Ted “has carried the heavy mantle his brothers left behind.” King then welcomed to his program a Democratic consultant and a Palm Beach socialite to balance the rape accusations. It was clear that CNN, as with many of the major media outlets, had sided with the Kennedy clan. It was going to be a rough ride for Bowman.

Reputable media organizations typically observe the industry protocol of shielding the identity of an alleged victim of a sexual assault until after the criminal proceedings ended. But such media restraint didn’t last very long when it came to the Kennedy accuser. Two weeks after the alleged attack, the checkout-stand tabloid The Globe published her name and photograph. NBC News quickly followed suit and identified the woman on April 16.

The following day, the New York Times not only named Patricia Bowman but also published a nearly 1,800-word, extremely critical profile about her that no doubt made Smith’s criminal defense team smile. The Times informed readers Bowman was a poor student and an unwed mother who “had a little wild streak,” that she frequented nightspots where the rich would hang out, and that she had racked-up 17 traffic tickets. The article also implied Bowman’s mother was a gold digger. It was as if the New York Times was making the case on behalf of William Kennedy Smith that Patricia Bowman was not to be believed.

The same day as the critical article profiling Bowman, the New York Times published a 1,000-word article that portrayed Ted Kennedy as the victim in the affair. The Times reported Kennedy was not going to be distracted from his senatorial duties by the rape case. It quoted one unnamed Democratic senator as saying, “The guy just can’t seem to get out from under a black cloud.”

It took nearly six weeks before State Attorney David Bludworth filed second-degree sexual assault charges against William Kennedy Smith. In a previous matter involving the Kennedys, a local judge questioned if Bludworth was working for the Kennedys rather than the public.

The Palm Beach police reported Bowman showed no signs of deception on polygraph and computer voice stress analysis tests. Bowman’s admission during her polygraph examination that she had been sexually intimate with seven men over the previous five years was released to the public.

There appeared to be a smear campaign orchestrated against Bowman. A reporter for the tabloid TV program A Current Affair told police in a sworn statement he was pursuing damaging information about Bowman’s past sexual history that was hinted to him by a Kennedy lawyer. In describing the upcoming trial, Newsweek explained Bowman may have to answer questions about “what she was wearing, what she was doing at the bar, [and] how she spoke to Smith.”

On December 11, after final arguments in what had been dubbed “The Trial of the Century,” the jury deliberated for a mere one hour and 19 minutes before delivering a verdict of not guilty. At a Kennedy victory party that night at a local bar, a juror joined in the hugging and kissing.

Years later, Dr. William Kennedy Smith was working for the Center for International Rehabilitation. The Chicago-based organization provided assistance to land mine victims. In 2004, Smith’s office assistant, Audra Soulias, filed a lawsuit against the doctor, alleging he engaged in a pattern of workplace sexual harassment. She also claimed that in January 1999, Smith sexually assaulted her but stopped short of rape. An Illinois judge dismissed her lawsuit.

Another work colleague, Laura Hamilton, reportedly reached a six-figure settlement with Smith after she was prepared to file a lawsuit alleging that she was the victim of several years of unwanted physical touching and sexual advances by Smith. This culminated, Hamilton claimed, with Smith raping her during a business trip to Croatia in 2002.

This essay is adapted from Washington Babylon: From George Washington to Donald Trump, Scandals That Rocked the Nation, by Mark Hyman, foreword by R. Emmett Tyrrell, Jr. Available online now and on sale in stores on October 22, 2019. Read a previous excerpt published in The American Spectator.