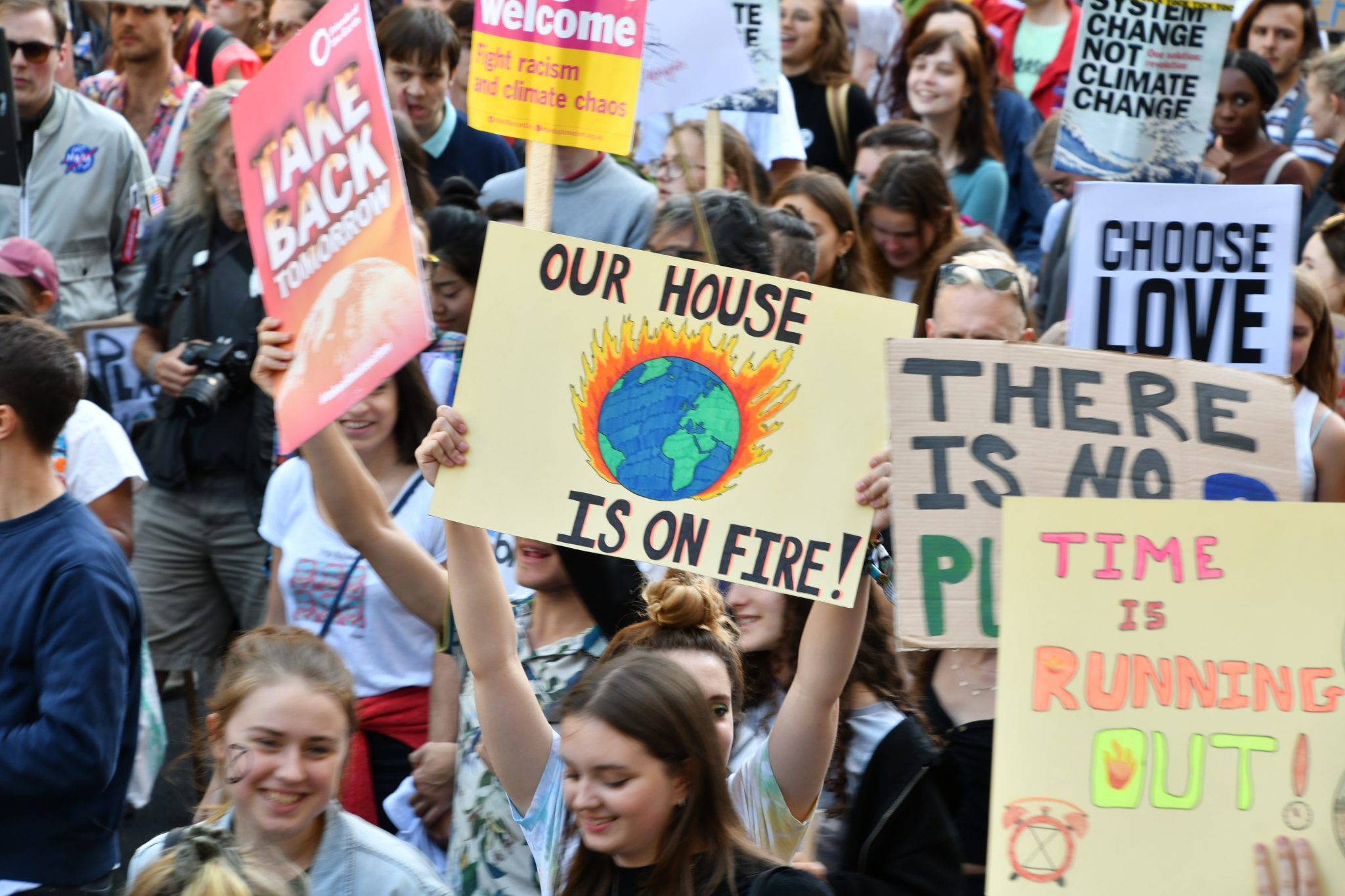 Unsettled: What Climate Science Tells Us, What it Doesn’t, and Why it Matters
Dr. Steven Koonin
(BenBella Books, 240 pages, $25)

If politicians’ positions on public policy were guided by knowledge and honesty, the entire “national conversation” and congressional debate about global warming climate change would be different, if it existed at all. It’s unclear whether our elected “leaders” can be convinced to increase their commitment to truth and to “following the science,” but their knowledge of the facts about climate change would be — and yours will be — transformed by reading Dr. Steven Koonin’s Unsettled: What Climate Science Tells Us, What it Doesn’t, and Why it Matters.

Along with that knowledge would necessarily come a pause in the reckless, unimaginably expensive, and distinctly anti-science rush to “do something” about a “problem” that approximately nobody in Congress, the White House, or any other level of government understands. For most who champion the “we must do something or we’ll all die” approach, their view of climate change has more in common with religion than with science. Their views are based on faith, which must not be questioned because all questions are already “settled.”

It’s important to know a little about Dr. Koonin: CalTech undergrad, MIT Ph.D. in theoretical physics. CalTech professor of theoretical physics and university provost. Chief scientist at BP focusing on alternative and renewable energy. Undersecretary of Energy for Science in the Obama administration. Currently teaching at NYU. In other words, this guy is 1) the real deal and 2) not a conservative or a “denier” (a shockingly pejorative term for people whose arguments are generally misconstrued by the “alarmists”).

In Unsettled, Dr. Koonin covers topics such as how much warming has — and has not — occurred; the human contribution to such warming; the fatal flaws in the models on which approximately all public policy proposals are based; why fears about heat, “extreme weather,” sea level rise, and other “apocalypses that ain’t” are based in non-science or at least misconstruing science; and, importantly, “Who Broke ‘The Science’ and Why,” in a chapter of that title.

A key takeaway is that media reports and punditry, even by scientists, about climate change are the result of something like a long game of “telephone” where the message is slightly altered through every connection it makes to get to that day’s talking head. It’s all the worse because the interpretation from the original scientific studies is typically made by people who don’t understand what they’re reading or who have a bias to emphasize or, more often, want to create a certain conclusion. In these days of “journalists” who have lost any scruple or trepidation about writing their opinion (no matter how uninformed) as news, you generally have both, resulting in dishonest translations of the science by people who didn’t understand it to begin with.

Indeed, one of the most surprising and important lessons of Unsettled is that many claims made by the media, politicians, and “scientists,” usually of the left, based on the UN’s Intergovernmental Panel on Climate Change (IPCC), are not made in the reports themselves or are views or conclusions that the reports explicitly say are held with “low confidence.” For example — and I expect this will shock anyone, regardless of your opinions on the issue or the science — the IPCC expresses the following:

An IPCC Special Report says, “Even if there were no anthropogenic (human-caused) changes in climate, a wide variety of natural weather and climate extremes would still occur.”

Media reports and punditry about climate change are the result of something like a long game of “telephone.”

Again, you might not be surprised to hear a “denier” say such things, but I’m guessing you’re more than a little flabbergasted to learn that they’re in the very UN reports that the alarmists use to tell us that we’re all going to die unless we bankrupt our children, make fuel unaffordable, transfer billions of dollars from U.S. taxpayers to Africa and Asia in pursuit of “climate justice,” stop driving cars, and otherwise eliminate the very things that have made modern human life the safest and most comfortable it’s ever been. (Indeed, the data series with one of the very best correlations with atmospheric carbon dioxide concentrations is life expectancy. I will leave it to others to debate causation.)

Mark Twain, or perhaps Benjamin Disraeli, is quoted as saying, “There are three kinds of lies: lies, damned lies, and statistics.” In Unsettled, Steven Koonin gives one of the most instructive examples of data abuse that I’ve seen — and I’ve seen a lot. In an effort to frighten the populace to go along with anti-science, big-government, unlimited spending and economic control, the 2017 Climate Science Special Report (CSSR) says that records for new daily high temperatures have been increasingly exceeding records for new daily low temperatures in recent years.

But the chart they use, which comes from the National Oceanic and Atmospheric Administration (NOAA) and is included below, is not the actual number of new record highs and new record lows but rather the ratio of the two numbers. In recent years, that number, which typically hovered around 2:1 for the last half-century, had spikes including 4:1, 5.5:1, and over 7:1. 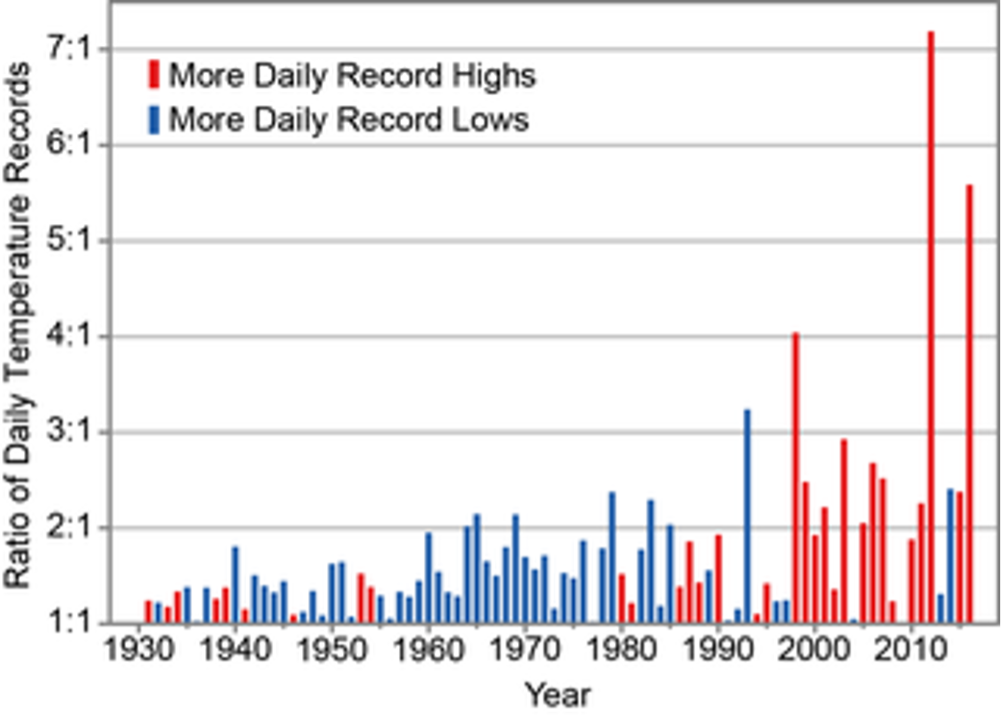 Who wouldn’t be scared by that? Especially with the alarming red bars! But as Koonin points out, why would the CSSR show as non-intuitive a number as the ratio of two series rather than just two lines on a graph, each representing the change in a series over time? Because that wouldn’t frighten you.

So over that time frame the ratio of new highs to new lows has quadrupled, a very ominous-looking chart no doubt, but actually the number of record highs and record lows have both fallen. And the fact that record lows have fallen more represents a moderation of climate that is beneficial to humans, especially given a study published last year that concludes that “cold temperatures are responsible for almost all temperature-related deaths.”

In other words, that chart is used to scare you into believing the world is turning into an oven when the underlying data is actually good news. That sort of mendacity is directed your way almost every time “climate change” is discussed on CNN or on the floor of the Senate.

Throughout Unsettled, you’ll become unsettled at the brazenness of the lies and misdirection used by those who support the Green New Deal, carbon taxes, painting your roof white, eliminating meat from our diets, forcing you to ride a bike to work or, even worse, take public transportation, and on and on and on. Almost everything you’ve been told by the mainstream media, including by “scientists,” is either intentionally or unintentionally erroneous, leading politicians to support policies that not only won’t help us today but will cause tremendous damage to future American generations’ standard of living and economic opportunities. In short, they are sacrificing our children’s futures at the altar of Gaia.

In economic terms, Dr. Koonin notes that even a dire prediction of future GDP losses due to climate change are small and distant, whereas some of the “solutions” proposed are exceptionally expensive and immediate and neglect a key fact: humans are not amoebae. We are highly adaptable and have been for millennia, and we will not just sit around and wait to die if the climate changes around us.

You already have a good sense of “who broke ‘the science’ and why,” so it is worth focusing on one of the key ethical questions Dr. Koonin raises. He quotes a climate researcher named Stephen Schneider, who ponders whether or not scientists should “offer up scary scenarios, make simplified, dramatic statements, and make little mention of any doubts we might have” because “we are not just scientists but human beings as well.” He adds, “Each of us has to decide what the right balance is between being effective and being honest.”

Did you say “wow” yet? I just did, even though I’ve read that five times before.

And politicians have taken their cue. For example, wacky Colorado leftist (and former senator) Tim Wirth has said, “We’ve got to ride this global warming issue. Even if the theory of global warming is wrong, we will be doing the right thing in terms of economic and environmental policy.”

You get the idea. Truth be damned, because we’re good people and we really care. Of course, what most climate-obsessed politicians really care about isn’t climate. It’s control.

It’s worth reminding ourselves that Dr. Koonin worked on renewable energy for BP and served in the Obama administration. This man is hardly a shill for coal and oil. Displaying a value that seems depressingly uncommon these days, at least among scientists who appear on television, Steven Koonin cares deeply about staying true to science: “It is the height of hubris for a scientist even to consider deliberately misinforming policy discussions in service of what they believe to be ethical. This would seem obvious in other contexts: imagine the outcry if it were discovered that scientists were misinterpreting data on birth control because of their religious beliefs for instance.”

In my radio interview with Dr. Koonin (20 minutes well spent for you, if I say so myself), Koonin courageously notes that there’s no money to be made in saying, “There’s no real problem here.” And so scientist after scientist does just what Steven Schneider suggested: they lie to the public in search of some combination of notoriety and grants from liberal nonprofits, and with the condescending “I know better than you do what’s good for you” mindset that we expect from Democrats, not hard-science Ph.D.s who have sold their souls.

When I asked Dr. Koonin about his courage, he replied that he’s too old and too well established to care about today’s “cancel culture.” If only more people had such spine these days.

But when it comes to Unsettled and the absolutely critical knowledge it imparts in plain English, policy-makers, pundits and just us regular citizens need not be brave; all we need do is read.

Given what is at stake with overly aggressive federal climate change legislation and regulation, Unsettled may be the single most important book on an issue of public policy that I’ve ever read. Please read it, share it, and send a copy to those representing you in Congress.