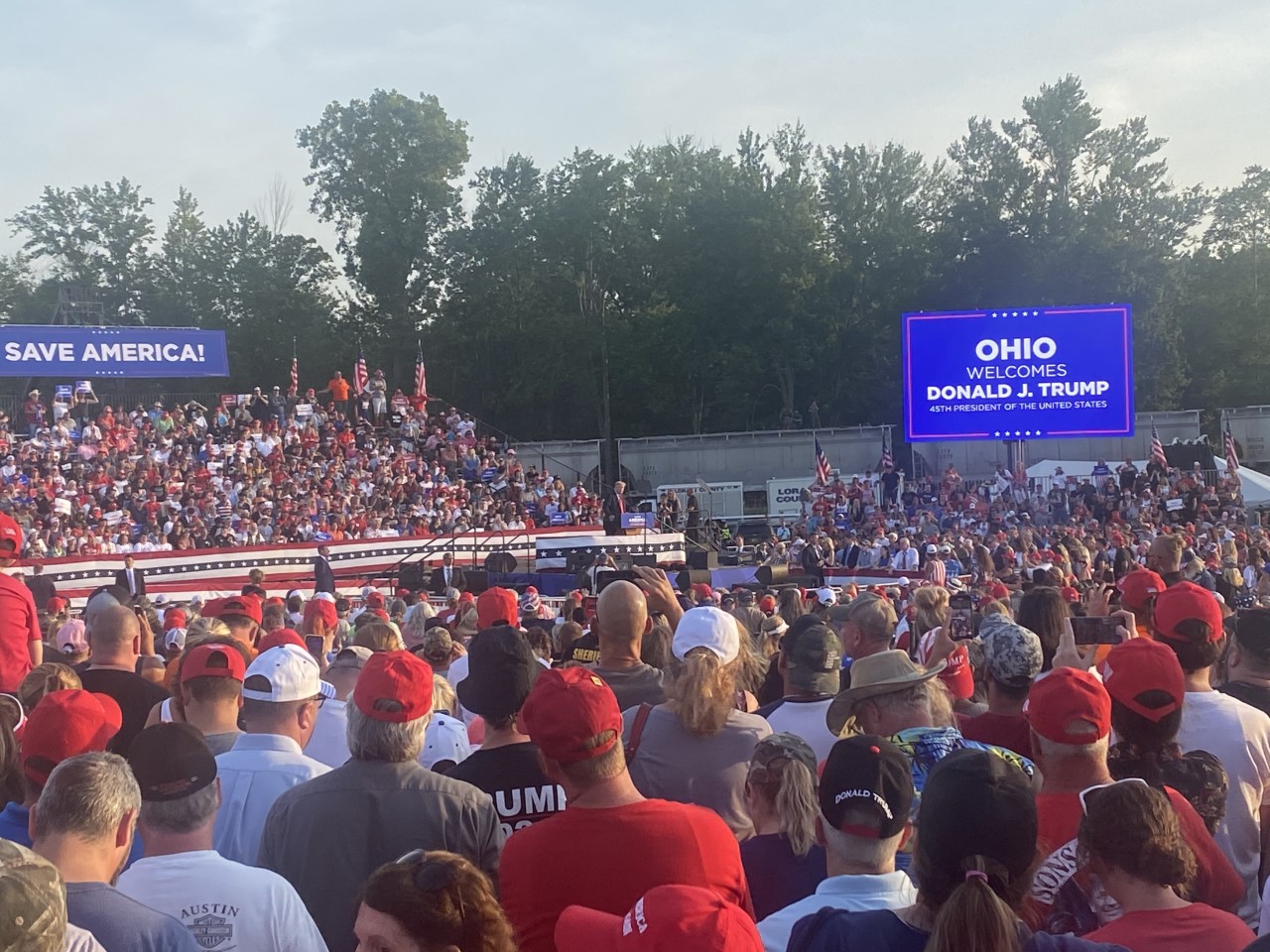 If you thought discussion about what took place during the 2020 election is going away under threat of censorship, shadow bans, cancellation, or just destroying people’s lives, think again.

That was the message when Donald Trump, fellow Republicans from Ohio and across the country, and a scientist/mathematician took the stage in Wellington, Ohio, at the Lorain County Fairgrounds.

Much to the chagrin of Jack Dorsey, Mark Zuckerberg, and CNN, the “big lie” that there was monumental funny business and statistical anomalies in 2020 was openly and frequently discussed Saturday night.

The holding pattern and silence that many Republicans have found themselves dealing with post-election — whether self-imposed or otherwise — was broken on a nearly perfect summer evening in Ohio.

It seems there are changing rules to this game in America.

But Trump has always been a rule-breaker, and he and his partners on the stage Saturday talked about all of it.

Trump and others hammered what they described as evidence that what happened in 2020 just does not happen for a losing presidential candidate in American elections:

Bellwether counties that went 18 out of 19 for Trump.

Ohio, Florida, and Iowa for Trump.

Mathematical and statistical anomalies across the board that just do not compute.

COVID allowances for voting that led to large-scale loopholes. “They used COVID in order to rig the election and in order to steal the election. THEY USED COVID,” Trump said. “That’s as simple as it gets.”

And a historical first: pausing of the vote count on election night. Except it appeared that some places kept counting and at others poll workers grabbed bins of votes and seemingly ran them through a tabulator repeatedly after people were sent home.

Trump made clear they are coming for 2022 and beyond, but these talks are not going away.

So much of the 2020 election transpired in front of America’s eyes, but Trump gets a bad wrap when he’s blamed for spreading “conspiracy” tales about what happened.

Many Americans have questions about the election simply because they watched it.

Trump just has the audacity to discuss it.

Trump — and, perhaps more importantly, those who were present or participated in the rally — showed they are going to continue to talk about it and they are determined to get to the bottom of it.

The first indication that the 2020 election was going to be a hot topic of conversation on Saturday was that, hours before Trump went on stage, Mike Lindell stood in the press area, surrounded by a mob of people and conducting interviews. 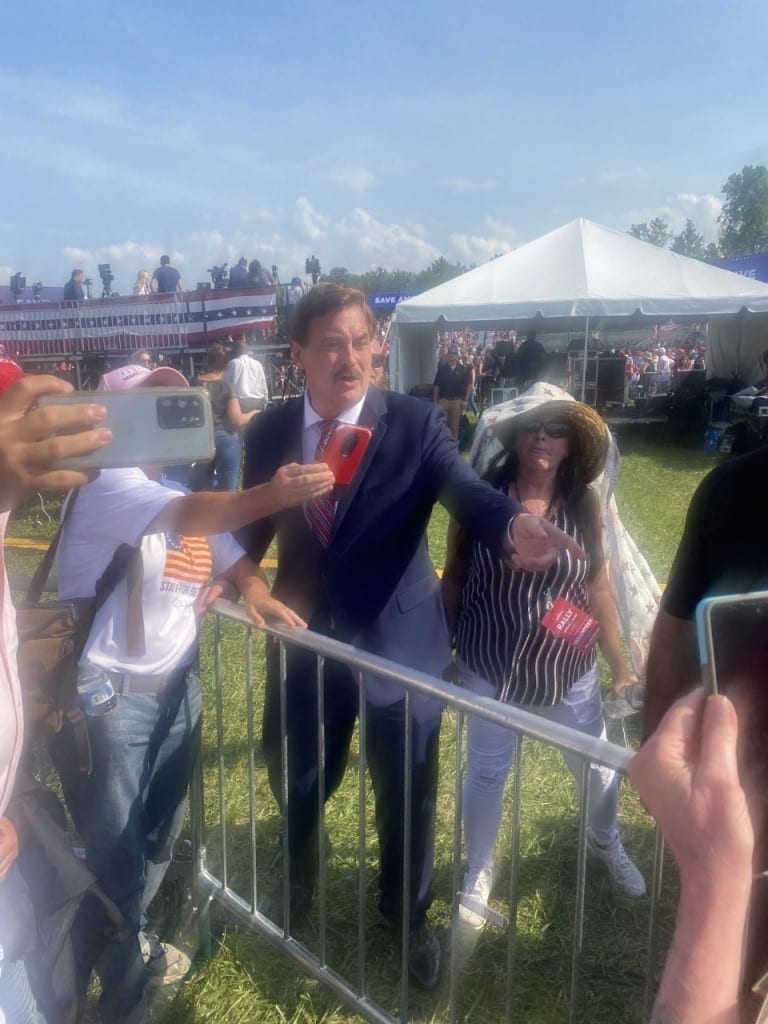 Lindell has aggressively tried to prove there was fraud in the election using his own money and resources, and all he has to show for it is constant mockery, a Twitter ban, and his My Pillow brand canceled at Kohl’s.

I caught up with him just long enough to ask him what his personal life has been like since he decided to make this his personal mission.

“My life has been like living in a movie,” he said. “If you had what I had — everyone would be going insane.”

Another tell that the 2020 election was the topic of the night in Wellington was the presence and selection of Dr. Douglas Frank as a speaker.

Frank — a scientist, mathematician, and academic — has been touring the country giving talks and presentations about the data and math behind what he claims proves the fraud.

His talk focused on algorithmic duplication of voting patterns and what he considers statistical impossibilities.

“I started my work in Pennsylvania. When I came to Ohio, I took the algorithms that I learned in Pennsylvania and I predicted all 88 counties in Ohio and I didn’t even know who was registered,” he said. “I just started from the census and used my algorithms to predict the whole state. Do you think in Ohio we had a clean election? Sorry– we didn’t.”

DeWine came down with a case of COVID that was not really COVID the last time Trump came calling in Ohio. He cited a “family conflict” this time around. DeWine has resembled a man hedging his bets throughout much of the pandemic and election cycle.

Gonzalez was one of 10 congressional Republicans who voted to impeach Trump after Jan. 6. His opponent, former Trump aide Max Miller, referred to Gonzalez as “RINO, Turncoat Tony.”

Heavy Republican hitters like Marjorie Taylor Greene and Jim Jordan were there as well as local representatives from Lorain County. Jordan described Trump as a president who “did more of what he said he would do than any president in my lifetime.”

Before yielding the stage to Trump, Jordan relayed a personal anecdote of touring the National Museum of the Air Force at Wright-Patterson Air Force Base in Dayton, Ohio.

“First picture they hold up … 1903, Kitty Hawk, North Carolina, in this thing they called a plane. And you look at it and your first thought is, ‘Wow. How’d this thing get off the ground?’ ” Jordan said regarding the Wright brothers’ plane. “Then they hold up a second picture — 1947, Chuck Yeager breaking the sound barrier…. That was the end of the tour.”

The tour and America’s aviation history inspired Jordan to think about American innovation and American greatness, he said.

“Polly and I start walking out of that room. I thought, wait a minute, why’d they stop there? I represent Wapakoneta, Ohio — hometown of Neil Armstrong,” he continued. “In 66 years, we went from two guys flying a hundred feet in this thing they called a plane to a man stepping on the moon, and in between another American breaks the sound barrier and another Ohioan orbits the Earth. All in one lifetime. Don’t ever let the Left or anyone tell you this is not the greatest nation in history, and it is worth fighting for — every single day.”

Trump argued election integrity and the ongoing audits were worth fighting for as well.

I have to admit that I did not think Wellington, Ohio, would be the first place Donald Trump chose for his reemergence on the campaign trail. But in retrospect, it is hard to fault the choice.

I’ve been to Lorain County Fairgrounds before, some 15 years earlier as a beat reporter covering the county fair. At the time they had a “combine demolition derby” — which is indeed exactly what it sounds like — tractor combines driving into one another.

The couple roads that lead you into the city of Wellington, Ohio, overflowed with Trump supporters Saturday night and ground to a halt. Trump flags lined or marked the entire route into the city. A plane flew overhead with a banner that further hammered the point home: “Ohio is Trump Country.”

It certainly was on Saturday.

The message was clear: Donald Trump and the America First agenda are moving forward, but they have every intention of getting to the bottom of what transpired in 2020.

Our tech and media overlords are going to be upset.