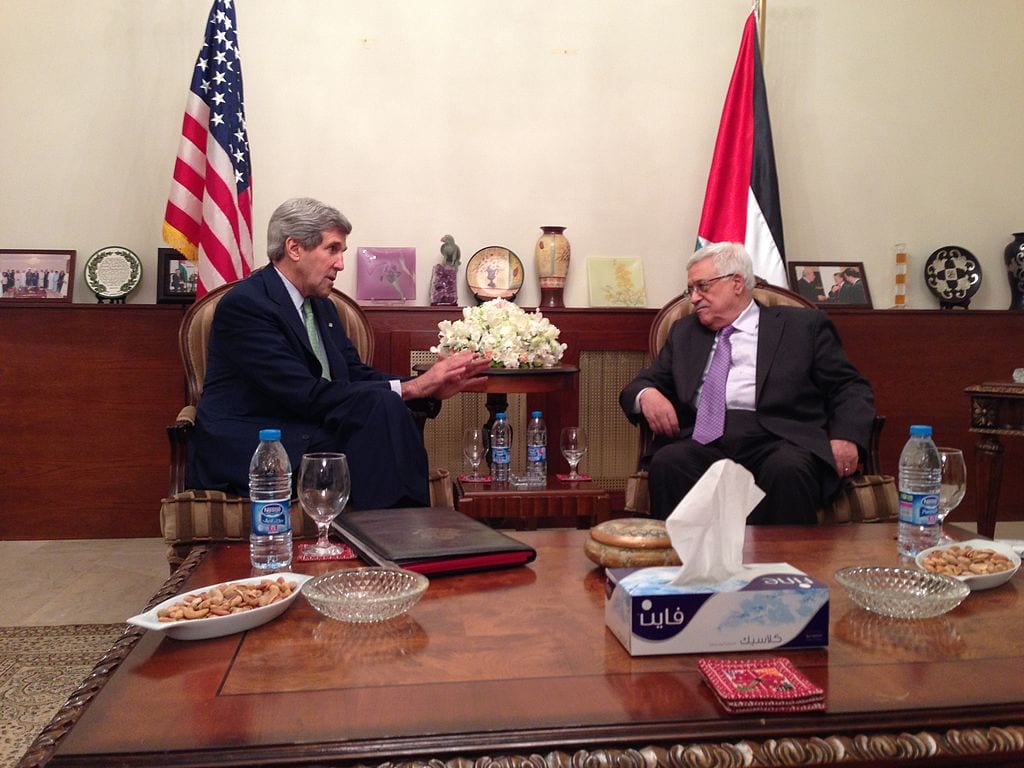 President Donald Trump wants to negotiate a “deal of the century” between Israelis and Palestinians like a high-rolling real-estate don.

At the World Economic Forum in Davos, Switzerland, on Thursday, Trump defended his decisions to recognize Jerusalem as Israel’s capital, to move the U.S. embassy from Tel Aviv to Jerusalem and to withhold $65 million of $125 million to the U.N. Relief and Welfare Agency that provides care for Palestinians.

Trump told reporters at a meeting with Israeli Prime Minister Benjamin Netanyahu that “the money is on the table.” The U.S., he said, gives “hundreds of millions of dollars” to the Palestinians, and “that money is on the table. Because why should we do that, as a country, if they’re doing nothing for us?”

Former Secretary of State John Kerry, meanwhile, wants to negotiate like the British colonel played by Alec Guinness in Bridge on the River Kwai.

The Israeli outlet Maariv reported Thursday that Kerry met with Hussein Agha, an ally of Palestinian President Mahmoud Abbas, in London. Kerry reportedly asked Agha to tell Abbas to “stay strong,” “play for time,” and not yield to Trump’s demands. He came across as more interested in protecting his rank than ending decades of strife, which was supposed to be his mission.

It seems Kerry is so committed to a two-state solution to the Israeli-Palestinian dispute that he prefers no deal to a deal with Trump.

Maariv also reported that Kerry, the Democrats’ losing presidential nominee in 2004, told Agha that Trump could be out of office in a year and that he was considering running for the White House in 2020.

It is rare to have a discussion with experts about Trump’s actions without hearing the definition of insanity — doing the same thing over and over again and expecting a different result.

Rabbi Dr. Donniel Hartman, president of the Shalom Hartman Institute in Jerusalem, cited the definition of insanity and mused, “I’m not saying it won’t work for sure,” although “I might have looked for a more thoughtful change that allows each side a total amount of dignity.”

Hartman warns that it often is a mistake to consider Palestinians simple bargainers at a table — when they see their pride at stake.

When Trump hosted Abbas at the White House in May, the president opened the door to an unimagined deal. But there has been no movement, and between the Dec. 6 Jerusalem announcement, the withholding of funds, and his questioning of a two-state solution, he essentially is signaling that Palestinian leaders better walk through the door now, while there still are concessions to be had.

“Palestinians are not very thrilled by this new formula,” Ghaith al-Omari of the Washington Institute of Near East Policy observed.

“Palestinians are now saying that because of all of this pressure, the U.S. can no longer serve as a mediator,” al-Omari added. “Whether this is just posturing remains to be seen, as many Palestinian leaders understand that a peace process cannot proceed without the U.S. playing a leading role.”

As for the withholding of funds to UN relief, Colum Lynch wrote in Foreign Policy, “There is concern that the move against the Palestinians could backfire, feeding greater extremism in the region.”

For Trump, this is all about getting a deal, and he showed himself ready to squeeze concessions from Israel as well. As Trump told Netanyahu in Davos, “You won one point” — on the embassy — “and you’ll give up some points later on in the negotiation, if it ever takes place.”

“Obama and Kerry, were they able to make the deal?” Hartman asked, rhetorically. The answer was no, because they lost the Israeli side. And Trump can’t win a deal without the Palestinians.