The Nation’s Pulse,Top Story Holocaust,Judaism,Mike Pence No, Leftists, Trump Is Not a ‘Nazi’ - The American Spectator | USA News and Politics
Menu
The Nation’s Pulse
No, Leftists, Trump Is Not a ‘Nazi’
It’s shameful to use that word in an attempt to score political points — and against a president who has been a great friend to Israel.
by Shmuel Klatzkin
Donald Trump with Ivanka and Jared Kushner in 2015 (Christian David Cooksey/Shutterstock.com) 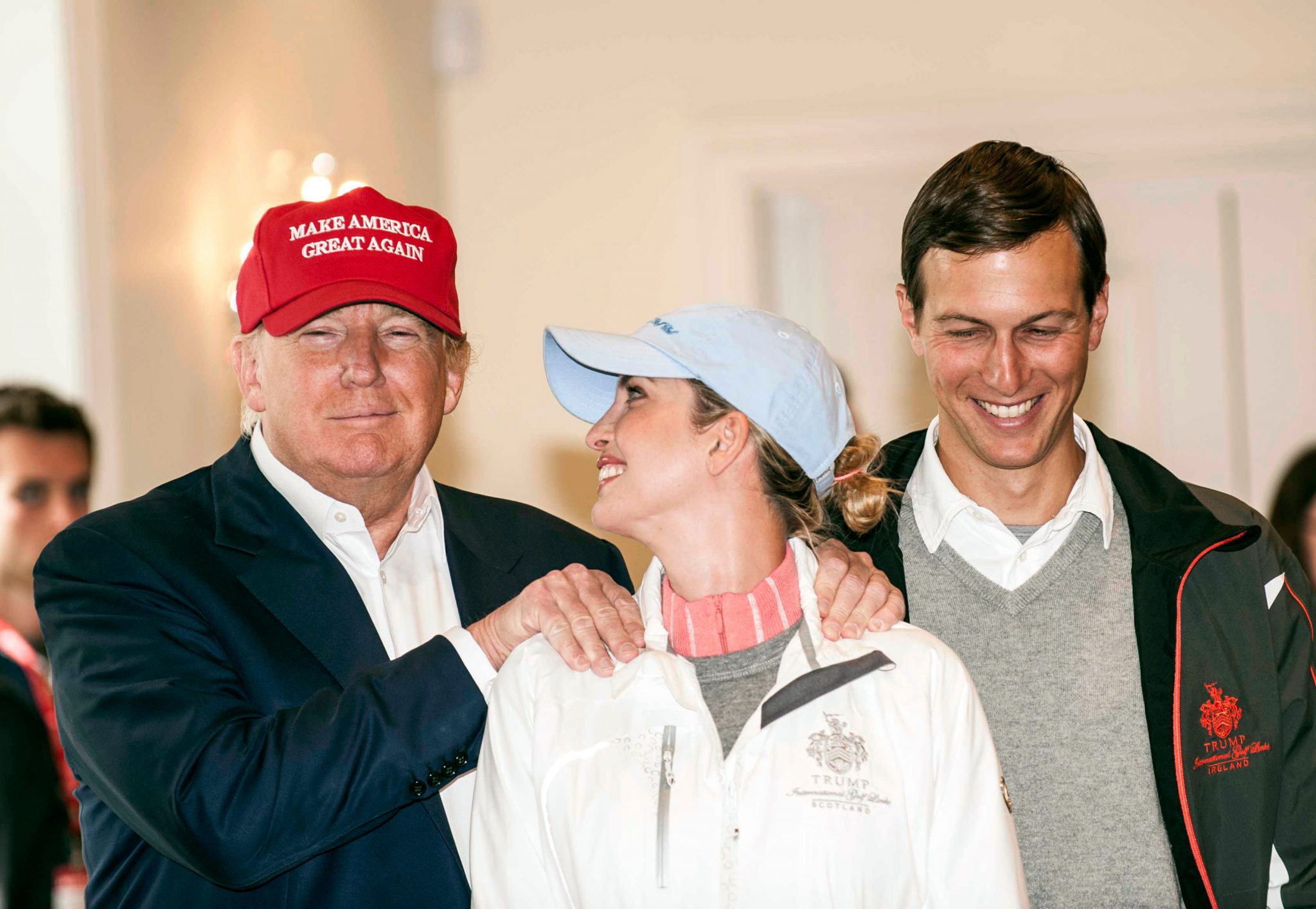 Elmer Wheeler, who billed himself as the World’s Greatest Salesman, used to teach, “Don’t sell the steak, sell the sizzle.”

It works pretty well. But if it turns out that all the salesman had to sell was a sizzle and there was no steak, then people will long remember that they have been played and bamboozled.

There is a sizzle to virtue. Everyone wants to claim the mantle of being a courageous advocate of all that is right and good. It is even more compelling when we add to the mix the specter of an enemy of virtue against whom the hero is fighting.

The great idea that is set forth in our Declaration of Independence, “All men are created equal,” motivates Americans to the courageous action that is our core national virtue. As Lincoln reminded us at Gettysburg, thousands of Americans gave their last full measure of devotion to uphold that principle. Nothing more appeals to the American voter than the principle that we are all equally endowed with basic political rights by the power that governs nature.

With the fun-house mirrors of wokedom removed, it’s pretty clear just how specious are these accusations of Nazism against Trump.

It is for that reason that so many voters respond when a candidate claims to be fighting against an opponent who opposes this most basic of American principles. If a candidate is a bigot, a racist, an anti-Semite, many Americans will feel an urgent need to oppose him and will vote for the candidate doing battle against such a fundamental evil.

But what happens if the charge is specious? What if, instead of being a righteous crusader, a candidate is simply slandering his opponent? What if there is no steak under the sizzle?

It is all too common during election season for accusations of vicious hatred against one group or another to be bandied about. If these grave accusations are true, then this is a grave concern; and if they are false, they are even graver, for they inure people to the charge and when there is real bigotry to oppose, many will be skeptical, having been deceived before.

This was on horrible display during World War II. Propagandists during the First World War specialized in atrocity stories; the “bloodthirsty Hun” was a motif of those on the Allied side. While there were some terrible violations, as often happens in war, the public saw after a while that far too many of these stories were exaggerations or lurid fantasies of manipulative propagandists.

When the first reports of the Holocaust began to seep out of Nazi-occupied Europe, they were largely dismissed by media sources and government officials. It took far too long for the full horror of what the Nazi program was to become accepted as fact, and even longer to begin to craft some kind of policy in response to it.

So it is a matter of intense personal concern to me when accusations of being a Nazi are bandied about in a political campaign in a serious and sustained way. How can one judge fairly whether such accusations are true? What would the criteria be?

Wokedom offers criteria that always result in conviction. In the world of the woke, an accusation is sufficient to establish guilt. True, anti-Semitism is not generally a concern of the woke. Official doctrine is that the Jews and the Irish accepted Whiteness and therefore are Oppressors and not the Oppressed. But given the constantly changing rules of the elite who establish the language of wokeness, anti-Semitism can be used against Trump (already accused and thus convicted of racism, sexism, and other more orthodox violations of the woke).

But suppose we were to use criteria that make their appeal to the ancient virtues of objectivity and reason, defying the New Sophistry. In very simple terms, let’s look at actions and see if the accusations of Nazism stand up, as alleged by a very vocal segment of the president’s opponents. Let’s see if there is size to their stake.

Vice President Mike Pence ably countered Sen. Kamala Harris’s innuendo along this line by calling to mind that the president has a Jewish daughter, son-in-law, and grandchildren. Is that a meaningful defense?

Given that the Nazi program was for a Final Solution — namely, the elimination of the Jewish people physically, then the president’s obviously warm and loving relationship with his Jewish family members sets him up as an opponent of the most basic Nazi idea. So Pence was squarely countering the argument right at the core of what a Nazi is, at the very core of its evil. At that core point, the president is in complete and total opposition to it.

Is that only an exception? Let’s look at his other actions. A recent article told the story of how the White House intervened to make sure that there would be an adequate supply of etrogim, the citron fruit used in celebration of the current holiday of Sukkot. A strange policy choice for an anti-Semite.

But what of matters of life-and-death significance, as those pertaining to the world’s largest Jewish community, Israel?

One of the candidates supported an arrangement that relieved from effective sanctions the country that is the largest state sponsor of terrorism in the world and a country that officially denies or minimizes the Holocaust while declaring its dedication to the eradication of Israel. That candidate is not named Trump. Trump ended that policy and set an opposite policy in motion. Which stance would a Nazi take?

One of the candidates served in an administration that, while promising in the campaign to move America’s embassy to Jerusalem, Israel’s capital, not only broke that promise but tacitly supported a UN Security Council resolution declaring Israel’s presence in Jerusalem criminal. That candidate is not named Trump. Trump moved our embassy to Jerusalem and recognizes Israel’s sovereignty there and in the Golan Heights.

With which stance would a Nazi be more comfortable?

One of the candidates supported a policy of distancing from Israel and coercion to achieve peace and came away empty-handed, accomplishing only the alienation of Israeli good will. This is not the candidate named Trump. Trump strengthened American cooperation with Israel and, with his support, emboldened it to engage boldly with neighboring Arab states. The president’s positive vision lead to breakthroughs, and he succeeded in brokering the first new peace treaties between Israel and Arab states in decades.

Whose actions were more in accord with Nazi aims?

With the media holding up a thick blanket, the sizzle of the president’s policies isn’t often heard. But the steak is there — actions that are meaningful and true, all of them supporting Jews and supporting the most populous Jewish community in the world in the face of the ongoing existential threat of Iran and its proxies and clients and the aging leftovers of other brands of Jew-hatred that had been so carefully cultivated in the region for decades.

But with the fun-house mirrors of wokedom removed, it’s pretty clear just how specious are these accusations of Nazism against Trump.

A great principle in Jewish thought is “hamaaseh hu ha’ikar.” The main and essential thing is the action. The actions of Trump are those of a resolute friend of the Jewish people who has dared to go against the mendacious flow and act powerfully for real peace. If you want someone to acquiesce to a slow suicide, he’s not your man.

But the actions of someone else in the contest prove that he is.