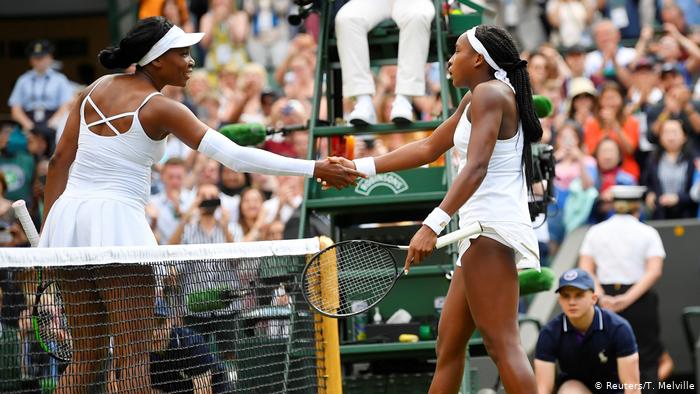 Comebacks make great stories, and when they are combined with Cinderella moments in athletic competition, they make great copy. On the most revered stage in tennis, the show courts at the All-England Racquet Club, Cori Gauff, age 15, has been writing her own story, themed “sky’s the limit if you try.”

Cori Gauff’s winning week began with a straight-set win over her idol, Venus Williams, who raised the trophy at Wimbledon’s legendary Centre Court before she was even born, and ended on the most thrilling note, with a rally from a set down and 2-5 in the second that required saving two match points against the more experienced Polona Hercog. The Florida teen is the star of Wimbledon, and the American sports press is delighted. For what it’s worth, TAS took note of Gauff’s talent and good nature two years ago when she was a U.S. Open Juniors finalist, but that’s an aside.

Indeed, it was a great week for American girls and women in the sports world, as the U.S. soccer team made it two world cups in a row with its 2-0 win over Netherlands on Sunday. Our sports stars are doing well in international softball competition, as well: the U.S. Pro Softball League, while not as well known as the WNBA, is thriving.

Less thrilling is the tempest in the teapot: an ex-pro-football quarterback. Mr. Colin Kaepernick, former San Francisco 49ers starter, now paid to endorse Nike sports shoes and other high-end apparel, objected to the company putting out one of its limited-edition designs, this one aimed at the Fourth of July market, featuring a replica of the Betsy Ross Stars and Stripes flag.

Americans once marched into British muskets behind that flag, and they sang,

A nation thrills, a nation bleeds

A nation follows where it leads

And every man is proud to yield

His life upon a crimson field

In the woke world of sports, this carries less weight than what a millionaire retired athlete with weird hair thinks constitutes “social justice,” and the billion-dollar company caved when Kaepernick vetoed their design.

In real fact, the most socially useful thing the fellow could do would be to tell kids in the inner cities to spend their money more wisely than on Nike sneakers, which, by the way, are made by slave laborers under any other name in countries characterized by the late Karl Wittfogel as “Oriental Despotisms.” In a dense and rich book worth reading today (what with the trade war and maritime arms race forming into a tropical storm over the Pacific), the Austrian, later American (something to be said for immigration) scholar Wittfogel showed how the monopoly of water resources in places like China and Indochina (now Vietnam) led to a monopoly of everything else, including political power: totalitarianism!

The Betsy Ross flag symbolized a revolution that led to the modern world’s first free republic, which, pace Colin K., doomed slavery in the United States.

Just between you and me, I am not displeased Nike will not use that design. It would put the Betsy Ross flag to the same commercial use that, on other occasions, the shoe manufacturer put the flags of Red China and other brutal tyrannous regimes, and do we want that? Personally, I find Stars-and-Stripes motifs on apparel vulgar and moronic. Maybe there should be a law, but there already are too many of those.

Capitalists, of course, are in the game for profits, and well they should be. They enable economic activity that can promote liberty and virtue when it takes place within sound political and legal structures. That Nike should be undermining trust required for such structures to endure by making light of freedom’s symbols in pursuit of profits, and then compounding the foolishness by jumping to the commands of self-appointed Savonarolas, is scarcely novel. Lenin observed over a hundred years ago that “the capitalists will sell us the rope with which we shall hang them.”

So long as America produces Cori Gauffs, who know nothing’s impossible with hard work, we likely will withstand the subversive reflexes that somehow resurface even in our free society. Take heart: along with a handful of other Americans, Miss Gauff goes with confidence into the second week of that glorious tournament, and we happily wish her well.