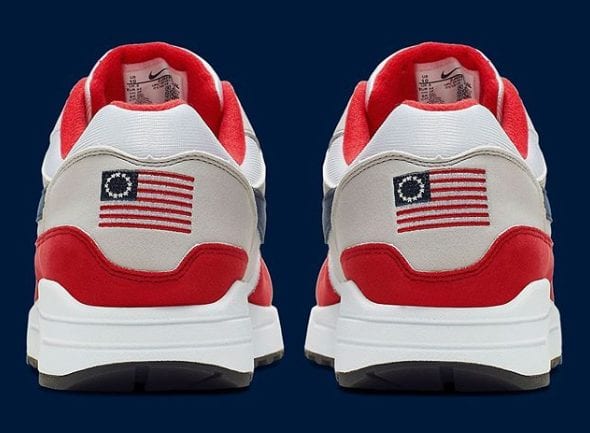 Sneakerheads woke up this morning to the news that the corporate war on America’s social ills has claimed a new victim: flag-emblazoned shoes.

The Wall Street Journal reports that Nike has pulled sneakers intended to commemorate the Fourth of July. The shoes were decorated with the Betsy Ross flag, an early American flag dating from the 18th century. While Nike has not officially stated its reasons, the report claims that the decision was due to the intervention of Colin Kaepernick, the former NFL star who has since turned himself into something of a social justice brand.

Kaepernick and his Twitter supporters claim that the flag is an “offensive symbol because of its connection to an era of slavery.” This happens to have been the same era in which the Declaration of Independence was written and the American Revolution was fought, both of which are the reasons why Independence Day is celebrated. Slavery, as vile an institution as it was, does not need to be the focus of every discussion of every American event, institution, or symbol from before the Civil War.

Another argument now being rolled out is that the flag has been appropriated by certain far-right elements, including the American Nazi Party. This line of attack is ridiculous. Accepting it means allowing an extreme fringe of politics, one as irrelevant as the ANP, to hold great swaths of American culture hostage. It means allowing this fringe to define the meaning of treasured American symbols. Such pessimism by progressives is but one of the consequences of a rabid “cancel culture” whose demands for ideological purity move its proponents into ever smaller bounds of acceptable thinking, speech, and iconography.

Kaepernick has been associated with Nike since late 2018, when he was made the face of a bombastic advertising campaign meant to play on his reputation of kneeling in protest before his NFL games. At the time, his relationship with Nike was easy to dismiss as yet another example of corporations exploiting controversy to seize the spotlight and generate more profit. The fact that Kaepernick has now forced Nike to cancel an already manufactured batch of sneakers complicates things. Perhaps the company has genuinely bought into the social justice message it has been peddling and is now willing to take its commitment to nonsensical lengths. Perhaps Kaepernick’s close association with Nike’s brand has empowered him to make such unreasonable demands of a multi-billion-dollar company. Neither possibility is very reassuring.

One good thing has come out of this postmodern drama, however. Arizona Governor Doug Ducey has announced the cancellation of millions of dollars of incentives that the state government had offered to Nike in exchange for constructing a new plant in Arizona. Such incentives should never have been promised in the first place. Though Ducey may have made his decision on political grounds, it’s still one fewer company collecting taxpayer handouts.