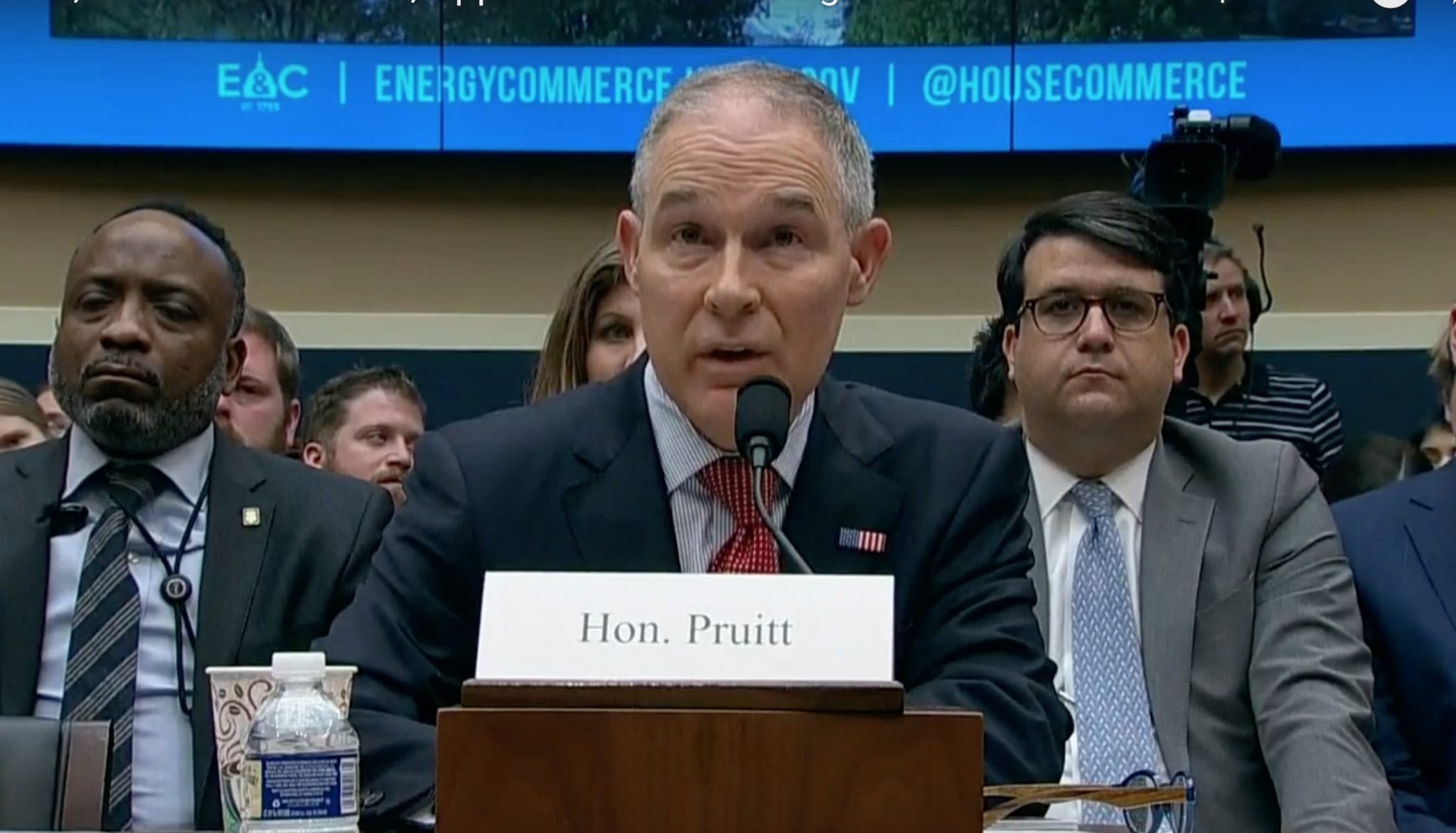 The attacks on Trump cabinet officials intensify in direct proportion to the effectiveness of the policies they advocate. Scott Pruitt, Trump’s EPA administrator, is Exhibit A of this phenomenon. Because he is preventing green ideologues at the EPA from harassing businesses, because he is at the forefront of Trump’s deregulatory successes, the Sierra Club and other left-wing groups organized a smear campaign against him. That campaign has culminated in the show trial of grandstanding Congressmen who feign outrage at Pruitt’s lack of “ethics.”

All of this noise is just an attempt to “derail the president’s agenda,” as Pruitt said to the badgering pols at Thursday’s Congressional hearing. David Horowitz, long a student of the left’s tactics, notes that whatever the left claims is the “issue” represents nothing more than a pretext to advance the real issue, left-wing policies. In Pruitt’s case, this tactic takes the comically ironic form of prodigal Democrats, who spend the public’s money like drunken sailors, faking up outrage at Pruitt’s “spending habits.”

What makes this complaint even more phony and ironic is the real cause of it: anger at Pruitt for saving taxpayer money by eliminating unnecessary staff and destructive job-killing programs at the EPA. The EPA is crawling with extreme environmentalists who earn fat salaries while doing nothing more than pushing left-wing activism at the expense of the oil and gas industry and other industries crucial to America’s economic success. Pruitt is trying to get rid of these anti-business lobbyists, and the environmental left is furious about it.

Under Obama, the EPA was an annex of the Sierra Club and its staffers spent their days devising schemes to undermine business in the name of ideology masquerading as “science.” Indeed, they would openly brag about this unscrupulous activism. In 2010, one of Obama’s regional EPA administrators, Al Armendariz, admitted that he told his staff to scare the hell out of businesses:

I was in a meeting once and I gave an analogy to my staff about my philosophy of enforcement, and I think it was probably a little crude and maybe not appropriate for the meeting, but I’ll go ahead and tell you what I said. It was kind of like how the Romans used to, you known, conquer villages in the Mediterranean. They’d go into a little Turkish town somewhere, they’d find the first five guys they saw and they’d crucify them. Then, you know, that town was really easy to manage for the next few years.

Armendariz had to quit after the uproar that followed coverage of that comment. He found employment later at the Sierra Club, helping to run its “Beyond Coal” program. Trump understood that Obama’s EPA wasn’t maintaining rational environmental standards but simply pushing left-wing politics, and that its habitual overregulation by figures like Armendariz placed a dead weight on the economy. He selected Pruitt to lift that weight, which turned Pruitt into a hated figure in the eyes of extreme environmentalists. Yet even as they whip up the mob against Pruitt, they pretend to wonder why he is so concerned about his “security.”

His critics at Thursday’s hearing came off as rude and flailing, and their stated concerns about his “wasteful spending” sounded completely insincere. The biggest fraud on this score was Anna Eshoo, a California Congresswoman from the Bay Area in the pocket of the Sierra Club who used her time to try and extract an apology from Pruitt with a lot of melodramatic mugging. Another Democrat complained that Pruitt wasn’t driving around in a “fuel-efficient” car. Is there no end to this man’s monstrous deeds?

The media’s coverage before the hearing was equally trollish, as it quickly cobbled together stories designed to make it appear that “even Republicans” and White House officials wanted Pruitt to resign. The premise of these stories — that Pruitt can no longer “carry out” the president’s agenda — is laughably dishonest given that they are coming from Republicans who don’t support that agenda.

The point of all of this propaganda is to make the Trump administration go wobbly on deregulation. The Democrats know they must turn Trump’s strengths into weaknesses, and scalping Pruitt is essential to that task. The more that the economy grows, the harder it is for them to reclaim power. They don’t go to the trouble of staging show trials and smearing people who are ineffective. They want Pruitt out and a more feckless and cowed figure put in. The only question now is: Will the GOP join the lynch mob or stop it?