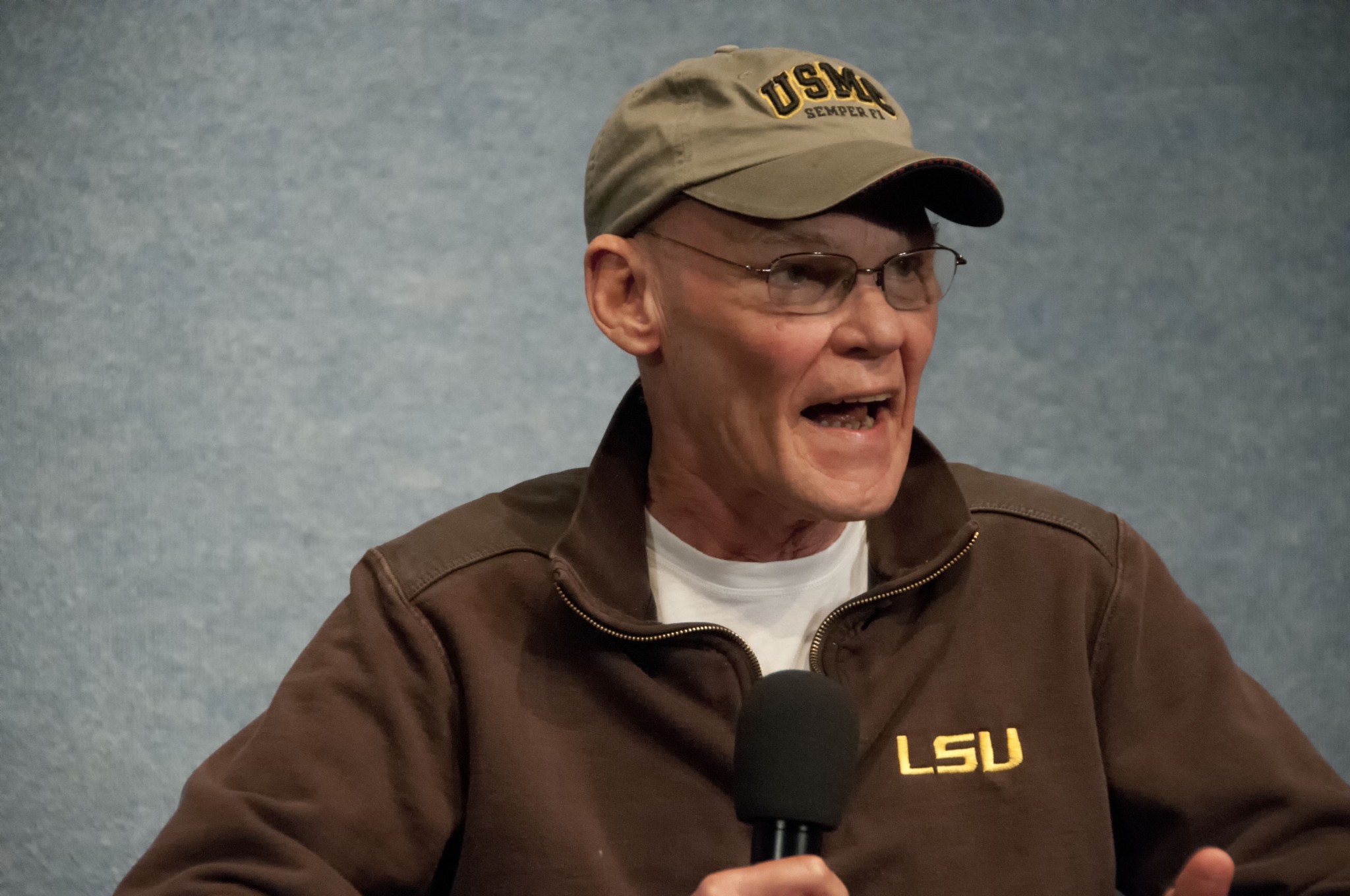 Our readers, many of whom are of a certain age, generally are roused to reaction by the presence of one James Carville, the former Bill Clinton political fixer and guru known occasionally by such nicknames/epithets as the Ragin’ Cajun, the Mouth of the South, and, in the words of his Republican political consultant wife, Mary Matalin, Lizard-Head.

People who are criticizing the Griner exchange are racist Putin-lovers pic.twitter.com/sqg87nVr8a

Relevant people don’t talk like this, and James Carville is less relevant now than at any point in his professional life.

Carville isn’t even relevant anymore back in Louisiana where he makes his home. His “moderate” wing of the Democrat Party produced the state’s current governor, John Bel Edwards, and Carville tracks with Edwards in his endorsements of candidates.

Yes, the irony of the Green New Deal crowd running on ending high utility bills should not be lost on you.

And Boissiere’s defeat tracked with another unexpected development in Saturday’s Louisiana elections, namely that Greg Tarver, the Edwards-endorsed Democrat favorite for mayor of Shreveport, the state’s third-largest city, was just clobbered in a landslide by Republican lawyer Tom Arceneaux. Arceneaux’s 56–44 victory was especially interesting given that Shreveport, one of the nation’s fastest-shrinking cities by population, is 55 percent black.

This comes on the heels of an especially embarrassing performance by Luke Mixon, the “moderate” Democrat establishment candidate in the U.S. Senate race won convincingly by incumbent Republican John Kennedy. Despite having Edwards’ endorsement — and the vociferous support of one James Carville — Mixon was thrashed not just by Kennedy but by far-left race hustler Gary Chambers, who trailed in with 18 percent to Mixon’s 13 percent. This after Carville had spewed invective all over Chambers, calling him an “idiot” and assailing him for his woke rhetoric.

Carville screeched about the utter futility of woke politics in Louisiana when the state Democrat Party punted on an endorsement in the Senate race by endorsing all three of its candidates back in August. “There’s no evidence that Louisiana Democrats or Louisiana general election voters want to lurch to the left,” he said. “The people who win are people like John Bel and Troy [Carter, who won a special election for Congress in 2021 against a pair of woke leftists, including Chambers].”

Carville said this as the Democrat Party was busily lurching not just to the left but to the far left in all of the elections it could. While Republicans were busily stomping out the “moderate” Democrats in every competitive race in the state. A “moderate” Democrat endorsed and supported by Edwards and Carville was even trounced in a state senate race in November in a district where Blue Dog Dems were supposed to have a last bastion of support.

And now Carville, having been thoroughly repudiated by events within his own party, is busily assailing critics of the Griner swap as Putinites and white supremacists.

He’s hardly the only Democrat making an utter ass of himself now. A quick perusal of Twitter will show just how unhinged and ridiculous these people are when their control over cultural and political institutions is shaken loose.

We give you the hilariously awful Eric Swalwell…

Jim Jordan thinks he’s going to spend 2-years lying about @potus. Sorry, Jim. We have other plans for you. It looks like this. pic.twitter.com/3ihzqnoSSb

Look at him bearing his fang fangs at Jim Jordan.

Hey Elon, under your leadership neo-Nazis, homophobes, and racists are flocking to Twitter. And spewing hate speech.

Your denial would be more credible if it was backed up by any real evidence.

And if it wasn’t followed by a bunch of antisemitic QAnon tweets attacking me. https://t.co/UnF0EKbemM

You could perhaps forgive Schiff for the unhinged quality of his abuse where Musk is concerned. He’s dealing with a double dose of grief, as not only has his side lost control of the House of Representatives, which means that, at least for now, his McCarthyite attempts at prosecution (persecution?) of Jan. 6 protesters are coming to a halt, along with lots of other activities for which he’s generated infamy, but Twitter is now a different place.

And boy has that made a difference among various people on the left.

Dr. Fauci is a national hero who will be remembered for generations to come for his innate goodness & many contributions to public health

Despite your business success, you will be remembered most for fueling public hate & divisions.

You may have money, but you have no class. https://t.co/0zabyXMERz

I won't be chased from Twitter.
And I won't spare @elonmusk the just criticism he deserves.

My pronouns are he/him, I believe in science, and I support Dr. Fauci. @elonmusk’s continued bad actions kept me from buying a @Tesla and now I am ecstatic to have a @UAW-made @chevrolet Bolt EUV in my driveway! pic.twitter.com/8Jj3kLjaEB

There’s more, and this might be the most hilarious thing you’ll see for the next, well, few minutes.

You probably don’t know who Patrice Snow is. She’s a Democrat political operative who’s worked for Deval Patrick and Tom Steyer and a few left-wing advocacy organizations, her current employer being something called DC Vote, which is pushing for statehood for Washington, DC.

And this was perhaps her masterpiece of all press releases…

Marjorie Taylor Greene’s statement over the weekend threatening our already fragile democracy by advocating for an even more violent coup than what took place on January 6, 2021 should not be ignored. In light of Greene’s un-American extremism, DC Vote’s communications director Patrice Snow released the following statement:

“DC residents have a unique risk when political violence occurs or when a sitting member of Congress calls for American carnage via an armed insurrection. The teachers, nurses, lawyers, government workers, veterans, and students who call DC home deserve to live without the threat of violence from anyone, specifically an elected official who comes to DC to serve,” said Patrice Snow of DC Vote. “In light of the distinctive peril DC residents face, DC Vote is calling on Rep. Kevin McCarthy to deny Marjorie Taylor Greene a spot on the House Oversight Committee in the upcoming 118th Congress. In fact, Greene shouldn’t be permitted to sit on any committee so long as she is spewing dangerous rhetoric and won’t uphold the Constitution or the rule of law.”

This came in response to Greene half-jokingly suggesting that if she or Steve Bannon had been in charge of the Jan. 6 “insurrection,” there would have been actual weapons present.

Which is hardly the inflammatory rhetoric Snow wants to make it. To people of ordinary intelligence or higher, it’s pretty obvious that any credible effort intended to topple a government would necessarily involve guns and ammunition, and since those were not present on Jan. 6, the more proper descriptive term is “protest.”

Snow is intentionally obtuse here. She’s well aware that far more violence than on Jan. 6 took place in Washington during the summer of 2020 and on Inauguration Day in 2017, but would prefer that her fellow Americans not have such recollections.

The point, though, is how pathetic it is for Snow to make demands on Kevin McCarthy where Greene is concerned. Who does she think she is? Yes, McCarthy comes off as at least a little squishy, but what favors does Snow think he owes her?

This is anything but an exhaustive sample of the squawkings of the Left over some very minor setbacks — Musk’s Twitter purchase and subsequent disclosure of its internal machinations, and the GOP takeover of the House majority. These are not world-changing events, though they do carry significance, but to the Democrats, they seem to be cataclysmic, or perhaps cause for ferocious hissing and strenuous objections.

Imagine what howlings a real defeat would occasion among these unstable wannabe tyrants.