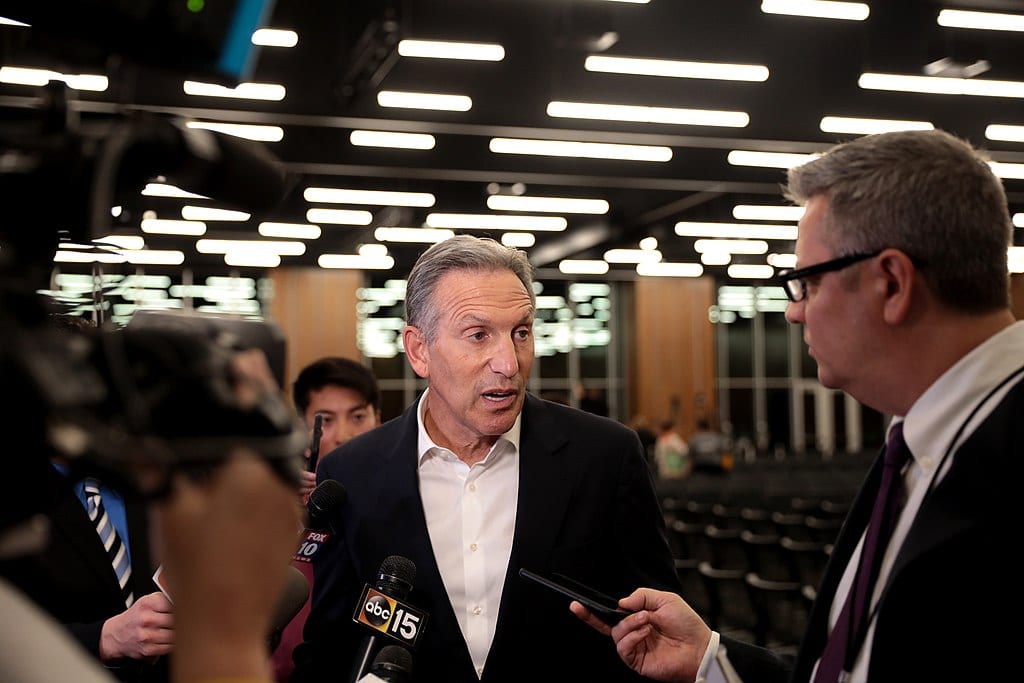 Howard Schultz is the former Chairman and CEO of Starbucks. He is a liberal who thinks Trump has “been on the wrong side of almost every issue.” He says “nobody wants to see Trump fired and leave office more than me.” He is also contemplating a 2020 run for the White House as an Independent.

Until that last point, he would have the support of America’s left; however, because of it, he is receiving just the opposite. The left has heckled Schultz at press events, savaged him on social media, and is ramping up the same in the conventional media. In a tortured twist of irony, in this one aspect he resembles what he most opposes: Schultz is receiving the treatment heretofore reserved for Trump and his administration.

What the left fears is that Schultz, in his desire to speak for the Independent center, will draw voters from the Democratic nominee and, by default, reelect Trump.

A poll by Christopher Newman’s Wason Center released on Feb. 26 will only throw gasoline on the left’s already blazing fire. The poll shows an unnamed Independent would draw 5-1 from a generic Democrat in a race against President Trump. Despite the poll’s use of a generic Democrat and Independent — and generics only exist in polls, not at them — Schultz remains a risk the left refuses to accept.

A day earlier, Warren Buffett summed up the left’s verdict on Schultz: “I think it would be a real mistake for him to run.” Not stopping there, Buffett added this whopper: “I think third-party candidates can thwart, actually, the will of the people.” Consider the hubris of that statement, so breathtaking in its self-interested narcissism. An eligible candidate who voters willingly choose is actually a threat to the people’s will. Only Orwell could have put it better: That voting is undemocratic.

Believing that whoever is not with them is against them, leftists treats them accordingly. In so doing they present their bedfellows, the establishment media, with a quandary.

On one side is Howard Schultz who says he wants to speak for America’s Independent center. The establishment media also loves to make the same claim by posing as unbiased, nonpartisan news reporters. So it is particularly problematic for these mainstreamers to claim the right to speak for that Independent center, while permitting the left to refuse Schultz the right to do so as well.

On the other side stands the left and its blatant desire to deny Schultz the opportunity to speak at all. The establishment media has relished its reporting role when it meant recounting — and giving coverage and legitimacy to — the left in its attempts to intimidate administration officials into silence and deny conservatives venues for their views. Undoubtedly the establishment media would like to do the same again with Schultz.

When the left targeted Trump, the administration, and conservatives in general, the establishment media’s reason for coverage was clear: It attacked those enemies too. And its rationale was perfect: It could claim to be broadening public conversation by including the left’s growing fringe. Now when the left’s attack is on the center, the establishment media has a problem.

In contrast, the left has no problem at all. It knows full well its dilemma lies not in its methods, but in its outcomes. The left’s policies simply do not work. Proven repeatedly over decades and continents, the left’s rhetoric does not match its realities.

The inescapable truth is its policies’ unmistakable failures. Anyone can see it, so the left’s solution: Allow no one to discuss it. The left’s “shouting down” of dissent is unquestionably uncivil and undemocratic, but it is even more existential. If its policies are to succeed — as far as they can, which is only to implementation — it needs to face no dissent, no alternatives, and no reminders of its past failures.

While nature may abhor a vacuum, the left requires one. To achieve it, it generally must create it. The more power it gets, the more it can proceed to fill it.

Donald Trump and his administration, and now Howard Schultz and his nascent campaign, are merely encountering the left’s modus operandi with an opposition. The left has no choice in this, only the establishment media does. Is it going to live up to its credo and finally call out the left’s transparent attempt to silence Schultz? Or is it going to live down to its past performance in legitimizing the left’s attacks on Trump? If “past is prologue,” we already know the answer, and Howard Schultz should prepare for the worst — both the left’s and the establishment media’s.