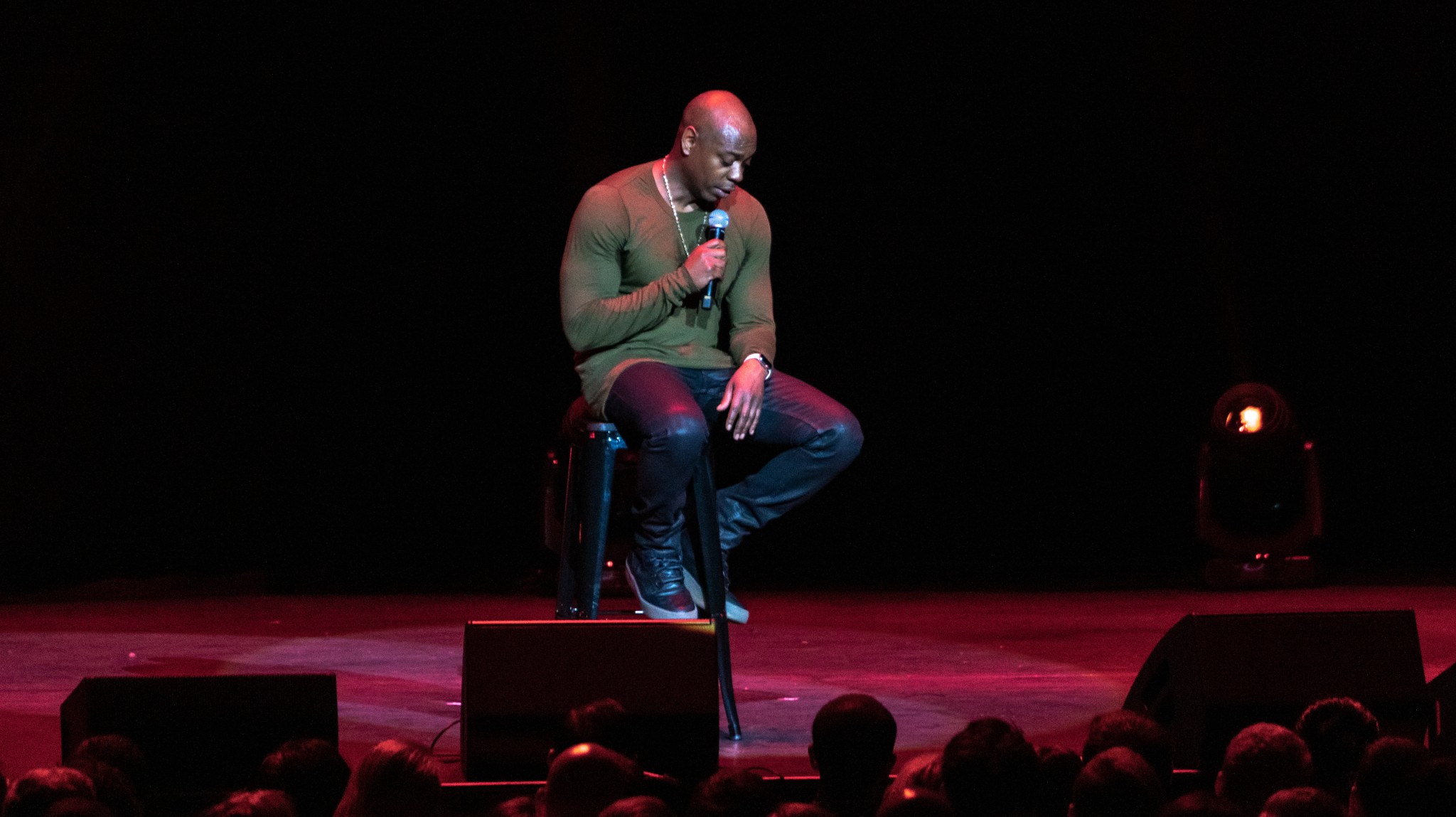 The National Black Justice Coalition, another LGBTQ advocacy group, went full-blown cancel, demanding that Netflix “should immediately pull ‘The Closer’ from its platform and directly apologize to the transgender community.”

“Transgender” is the “T” in LGBTQ. (No one is quite sure about the “Q”). LGBTQ activists have positioned themselves along with blacks, Hispanics, feminists, Asian-Americans, and Muslims among others as a principal subset in the intersectional coalition that has held the Democratic Party together for the last generation.

In a nutshell, intersectionality means that so-called marginalized groups share common oppressors and, by extension, common political interests. Its philosophy can and has been reduced to a bumper sticker, “COEXIST.”

Although useful for elected Democrats, intersectionality has not been good for comedians or their audiences. In fact, it has all but drained the humor out of American entertainment.

In that each intersectional subset is expected to subordinate its interests to the larger progressive whole, there is little tolerance for insubordinate thinking, even from comedians, especially from a hugely popular black comedian like Chappelle.

In “The Closer,” Chappelle calls direct attention to the unspoken rules of the intersectional game by citing the case of a 29-year-old rapper known as “DaBaby,” formerly known as “Baby Jesus” and before that as the more prosaic “Jonathan Kirk.”

While performing at a Miami Rap festival in July 2021, Kirk made some crude remarks on stage directed, as he explained later, not at gay men in general, but at “nasty gay n******.” For the LGBTQ community, that was your classic distinction without a difference.

It should be added that all of DaBaby’s lyrics are unspeakably crude and bound to offend someone. Hell, had he named himself “Baby Mohamed” instead of “Baby Jesus,” he would be dead by now. But once his gay comments started floating on social media, the worthies of the pop world — including luminaries like Madonna and Elton John — felt obliged to denounce him. Before he could even rhyme out an apology, activists had DaBaby canceled from just about every venue that paid his bills.

Chappelle alerted his audience to the the irony of it all. “DaBaby shot and killed a n***** in Walmart in North Carolina. Nothing bad happened to his career,” he only half-joked. “Do you see where I’m going with this? In our country, you can shoot and kill a n*****, but you better not hurt a gay person’s feelings.”

To be fair, Kirk beat the 2018 murder rap with a self-defense claim and pleaded guilty only to carrying a concealed weapon. In 2020, however, he was arrested on a robbery charge after police realized he had an outstanding arrest warrant for battery. Later that year, he slapped a female fan and then canceled his appearance when fans booed him. If that were not grounds enough for cancellation, he was openly collaborating with a fellow rapper charged with shooting a woman in each of her feet.

These incidents did not stop several major festivals from scheduling Kirk, including Lollapalooza, Austin City Limits, and The Governors Ball Music Festival, all of which canceled him following his remarks on gays at the Miami Rap Festival. A fashion brand dropped him as well.

Although he lives in rural Ohio with his wife and children, the 48-year-old Chappelle is hardly a Republican. “Is it possible a gay person can be racist?” he asked at one point. “Of course it is,” he answered, “look at Mike Pence.” The mixed-race Detroit audience ate it up. The problem for the Left is that they ate everything he said up. Fluent in the argot of the day, Chappelle has enough sway over his millions of fans to change minds, and that’s what troubles the woke masters of the Left.

One of those masters spoke publicly about the danger Chappelle represented. “His shadow is huge,” said the recently transitioned Jaclyn Moore, who at six-foot-five has a not so dainty shadow of her own. As Moore told Variety, “I never loved Dave’s trans material before but this time it felt different. This is the first time I felt like, ‘Oh, people are laughing at this joke and they’re agreeing that it’s absurd to call me a woman.'”

Moore is the showrunner — industry talk for writer/producer — for a preachy, unfunny Netflix comedy with a largely black cast called, “Dear White People.” Unnerved by “The Closer,” Moore threatened to break off from the network. “I can’t do this anymore. I won’t work for @netflix again as long as they keep promoting and profiting from dangerous transphobic content,” Moore posted on Instagram.

Until Moore went public, few fans of “Dear White People” knew that Moore was white. Many of the black viewers sounded off on learning this. “[Jaclyn Moore] tried to kick off a cancel campaign against Dave Chappelle and it backfired,” said one typical commenter. “Privileged white people, who view black people with utter contempt, make the shows you watch. This is why the media’s images of black people are always stereotypical and negative.”

This was not the first time Chappelle threatened the tenuous hold the woke had on their unnatural coalition. In his 2019 Netflix special, “Sticks and Stones,” he challenged his fans on, among other subjects, abortion. After setting his fans up with liberal boilerplate about the right of a woman to choose, he seduced them into a logical cul-de-sac.

“And ladies, to be fair to us, I also believe that if you decide to have the baby, a man should not have to pay,” said Chappelle with a straight face. “That’s fair. If you can kill this motherf–-er, I can at least abandon them. It’s my money, my choice. And if I’m wrong, then perhaps we’re wrong.”

Chappelle concluded this riff with a message that underlies all of his comedy, “Think that sh– out for yourselves.” As Chappelle understands, the last thing the woke masters want is for young Americans to think things out for themselves. The masters know just how empty is their worldview and fragile their coalition. To preserve that coalition, the source of their power, they stir the Twitter mobs to outrage at the first sign of fracture. It almost always works. It worked for DaBaby.

Chappelle wasn’t having it. “Please do not abort DaBaby,” he told his audience, and his critics knew better than his fans just how subversive that message was.