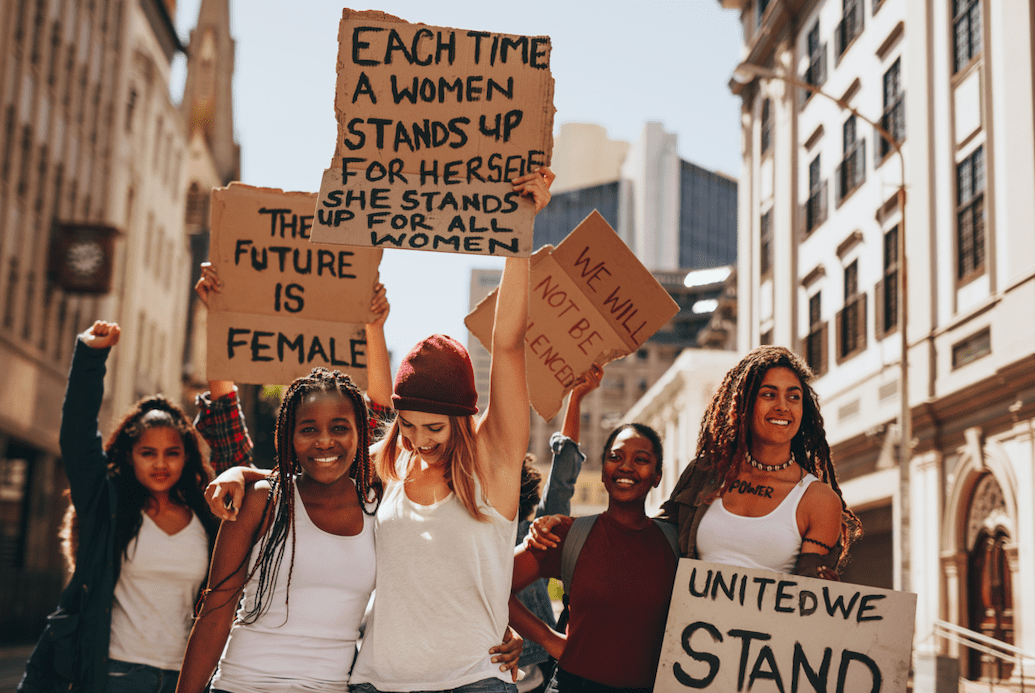 The past few years have often felt like an unending stand-up comedy routine. From the ’50s.

“Women are so dumb,” the comic begins, “that we need to create a ‘Women’s March’ to tell them what to think.”

The fact that even calling something a “Women’s March” undermines the core principles of feminism was completely lost on the organizers. On much of the left, feminism has come to mean strict adherence to an orthodoxy of leftist politics — the exact opposite of the original concept of feminism.

We’ve gone back to the days where it was presumed not only that all women think alike but also that they lack the cognitive skills to reason and make sound — individual — decisions.

“Women are so dumb,” the comic continues, “that they won’t notice if we slip a few unqualified women into Congress.” As part of the generation of women who fought hard to prove our intellectual equality, many of us have found it beyond infuriating to have to listen to a few congresswomen — “the Squad” — struggle with basic U.S. history and do little more than act as puppets for extremist ideologies.

The fact that the Democratic leadership bows to their every whim is surreal; we have returned to the sexism of low expectations.

But perhaps the best joke of all has involved the confirmation of Supreme Court Justice Brett Kavanaugh. “Women are so dumb,” laughs the comic, “that we’re going to skewer this guy by making all women look so fragile that they can’t speak up for themselves — that they have to wait 35 years before talking about something that may or may not have happened in high school and college!”

With the latest non-allegation set forth by the New York Times and a new book co-authored by two of its reporters, Kavanaugh is back in the news, and women are forced yet again to listen to more hysteria that makes women look, well, dumb. This is the case from the unethical reporting — Robin Pogrebin allegedly fed her sources what she wanted them to say — to the fact that the purported “bombshell” came from a guy: the alleged victim denies that it ever happened.

Women are so dumb, you see, that we need men to tell us what happened to us more than a quarter century ago.

The ironies of this latest hysteria abound. Personal responsibility was key to the original concept of feminism. But apparently Democrats don’t believe women are capable of it. So yes, the paternalistic — patriarchal — Democratic Party has come to our rescue!

And then there’s the glaring hypocrisy. Any woman who lived in D.C. in the late ’80s and ’90s (I was working at the Washington Post and the New Republic) saw and heard a lot of icky, ugly stuff — mostly done by young Democratic men working in nonprofits. If any of us wanted to blast the careers of more than a dozen high-ranking Democrats, we could do so in a heartbeat.

But that probably won’t happen. That’s because of this thing called ethics. Sure, part of feminism is tackling issues like rape and sexual harassment. But like everything else, it has to be done through the lens of equality — meaning women take responsibility for their actions and lives. Part of that is knowing it is wrong — simply, unequivocally wrong — to bring up something that happened 30-plus years ago when there have been zero accusations since then.

Of course, even if some of us did come forward, we would get very little media attention, because not only are regressive, illiberal leftists destroying feminism but they have also unmercifully destroyed non-partisan journalism.

The only good that can come from any of this is a reteaching of the basic principles of feminism: in addition to individuality and personal responsibility, the notion of freedom also seems to have been lost. Recently, a leftist lawyer called me “just a housewife” on Facebook because I chose to work part-time while raising my son. Leaving aside the comical use of the word housewife, he seems oblivious to the fact that feminism did not mandate that women drop newborns into the hands of nannies and then run back to the office as quickly as possible. At its essence, feminism means freedom—the freedom to choose to live our lives as we wish.

As an Independent, I offer up this tip to the Democratic Party: Women are not as dumb and fragile as you’d like us to be. Do not project your hyper-partisan nihilism onto us; we’re not your pawns.

Want to change the presidency? Put up a decent candidate. Until then, stop destroying feminism and liberalism.

Karen Lehrman Bloch is author of The Lipstick Proviso: Women, Sex & Power in the Real World (Doubleday) and the forthcoming The Elegant Soul: In Search of Truth, Beauty & Dignity in Uncivil Times.